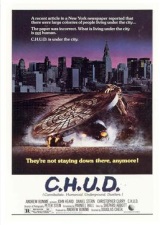 This film begins with a woman walking her dog down the street in New York City; she is played by Laure Mattos. Something comes out of a manhole and pulls her in.

We then shift to a guy looking out of his window; he is played by John Heard. His phone is ringing and the answering machine picks it up. The voice over it is a reporter that he worked with. Heard is a photographer and the voice needs a photo of a bag lady for an article about the homeless people living underneath the ground in the subway tunnels. Heard has a live-in girlfriend played by Kim Greist. She is a model and they have a photo shoot later that day.

The film then shifts to a local police precinct. There is a captain that is played by Christopher Curry. There is an unusually high number of missing persons. One of them is Curry’s wife, who is Mattos. We see him make a call to his chief, played by Eddie Jones. There is a cover-up that is going on and Curry knows about it. Curry does notice that all of these disappearances are within a small area. Before Curry heads out to check on a homeless man who vanished, he talks to a freelance reporter who is played by J.C. Quinn who is trying to get a story.

This leads him to a reverend that runs a local soup kitchen. This man is played by Daniel Stern. He isn’t happy that Curry shows up, but he knows something is up when they send him instead of a normal officer. During this visit, he meets with a crazed man played by Graham Beckel. He pulls a knife and Curry asks why he has it. Stern states that homeless people are arming themselves for some reason.

At the photo shoot, Heard gets agitated. He takes some time to call his answering machine when he hears a message from the bag lady he photographed. She is played by Ruth Maleczech. She has been arrested for trying to steal a police officer’s gun. He goes to bail her out and then walks her home. The problem is that she lives in the subway tunnels with her brother and his friend. Her brother is played by Bill Raymond and he is hurt. He has a nasty wound on his leg. What could have caused it?

Curry goes back later that night to meet with Stern and he takes him down into a tunnel by his soup kitchen. He shows him some things he found that were abandoned down there which are nearby his place. They find things used in nuclear power plants and even a Geiger counter. When they turn it on, something moves past in the distance that registers the highest number, before shutting down. They then hear a roar.

What made this sound? Is it what attacked Raymond? Are there more? What are the government people trying to cover up?

This viewing was the first time that I’ve actually watched it all the way through. I caught it about halfway through a while ago when it was on Chiller. This is really a fun, toxic monster/zombie film to me. I like that they brought in the realism that there are homeless people living in a city like New York that don’t have anywhere to go so they live in the old subway tunnels for shelter. This came out in the era where toxic waste was something that scared people and they didn’t know what the side effects of it. I love that C.H.U.D. is an acronym for two things, Cannibalistic Humanoid Underground Dweller or Contamination Hazard Urban Disposal. This does have a good social commentary as well about the government doing illegal things and it having side effects that are dangerous. This is something that we see even today.

The acting in this film is surprisingly good, mostly by people I’m assuming weren’t big, but would go on to do big things. Heard is solid as the successful photographer who wants to do something that is worthwhile. You see that from getting angry at the perfume photo shoot as well as when he talks to Quinn. Stern is in a more serious role here, but he is naturally funny and that shows. I think that actually makes me enjoy him in the film even more. Curry is solid as the main cop. I was questioning why he wasn’t more upset about his wife being missing, but when it is revealed to what happened to her, he makes up for it. I’ve seen Greist in Manhunter, but this film she really doesn’t do much. I think a lot of is due to lack of screen time. I do like the sequence when she is attacked in the apartment though. I also want to point out that Sam McMurray, John Goodman, Quinn, Frankie Faison and Jon Polito all make appearances in this film. They all have had successful careers in acting and fun to see them in such minor roles in this film.

Next I have to talk about the creatures. The name implies that they are people who have been mutated. To me I’d say they are mutated monster zombies. I really like that this film used practical effects to make them. At times you can tell it is someone in a rubber suit, but they still look scary. I love that the have adapted to their environment with their glowing eyes and animal like features. The editing of the film helps this, because early on we just get glimpses, but as the tension has been built we see them more and more. I enjoyed the score for the film as well. One scene that really stood out to me was when Greist is attacked in her apartment. It has an electronic sound to it and makes it tenser.

Now with that said, this film comes in with a bit of a cheesy, camp feel to it and I really enjoyed it. This is a film that actually has an underlying message, but is above average creature feature. The story progresses and builds tension. The acting actually has some solid actors who have gone on to have good careers for the most part. I think the monsters, whatever they officially are, look good. The editing of the film I think was good and the score was solid for what they needed. If you are a horror fan, I think that you will enjoy this film. Don’t come into watching it with high expectations and just enjoy what is on the screen.