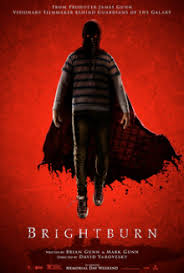 This was a film I was quite intrigued to check out. The concept of a superhero that is evil is one that I’m down for, especially since this character seems to be very similar to Superman. The synopsis is what if a child from another world crash-landed on Earth, but instead of becoming a hero to mankind proved to be something far more sinister?

We start this film off seeing books that belong to a married couple. The couple are Tori (Elizabeth Banks) and Kyle Breyer (David Denman). They are struggling to get pregnant. They experience something like an earthquake and then see that they now have a child. We are given video as he grows up and it shifts 10 years into the future. Their son is Brandon (Jackson A. Dunn).

In school we see that he is quite smart as she answers questions from his teachers. Some boys mock him, but we see that Caitlyn (Emmie Hunter) has a crush on him. His parents take him out for dinner for his birthday and his aunt and uncle are there, Noah (Matt Jones) and Merliee McNichol (Meredith Hagner). Brandon is given a gun by Noah and his dad doesn’t want him to have it. This causes a standoff and that the boy might have some supernatural abilities.

At night, something draws Brandon to the barn. Under a trapdoor is a glowing red light. Through some conversations, Brandon has never been cut, bruised or even gets sick. He starting to realize that he has some other superhuman abilities. When he finally decides what the hidden item is calling for him to do, he realizes that he is special and that no one will stand in his way.

Since I don’t like spoiling films, especially new ones I want to ensure that I didn’t go into too much with the story. To be honest though, there isn’t a lot to the story, but it works for me. This film really did just take the origin story of Superman and how he came to Earth, but instead of him assimilating to his loving parents, Brandon decides that he is superior.

Something that the film actually reveals though is that Tori and Kyle were pretty wild in their youth. I like this subtle little hint that they might be in over their heads. Even more than that though, Tori pretty much all but says that she would never abandoned him and would always stand by his side. Her parents weren’t there for her, so she wants to be there for him.

To go back to it though, Brandon is such an interesting character. He is bullied and really doesn’t fit in. The problem though is that he bullies don’t really understand who they are messing with. I was actually talking to my roommate about this film and he brought up the point, if you had the strength and any of the abilities that Brandon or Superman for that matter had, wouldn’t you be more likely to be power-hungry like he is. This is really something that hit me and I have to say, I think so. I’m a pretty nice guy and tend to do the right thing, but much like Ben Parker, with great power, comes great responsibility, despite how cliché that is.

This film is paced very well in my opinion as well. I think the film is very subtle in introducing some background information, but we aren’t force-fed it. On top of that it moves through at a good pace. The film is 90 minutes long, so that definitely helps here as well. Seeing the darkening of Brandon as the film goes on and people cross him I think really helps that as well. It isn’t necessarily a sudden change, but it does escalate. The ending was right in line where I wanted it to go and something I am definitely down for.

To move next to the acting, which I think is really good. Banks has desperation about her since she really wants a child. She wants to give what her parents didn’t for her and going even farther, she will do whatever to protect her son. I saw a bit of my mother in her as well. Tori isn’t necessarily equipped to handle a child like this, but then again, who really is? Denman is a really good compliment to her. I like that he is ready to face the facts of what their child could really be when she isn’t. They play off each other well. Now if you’ve read any review of mine when it comes to children, it can be hit or miss. I think Dunn is great in his role. He is devoid of emotion, but if you are superhuman like he is, I could see that being the case. He isn’t human so he wouldn’t necessarily have human emotions. I would say that the rest of the cast rounded out for what was needed in my opinion.

On to the effects of the film, I was definitely surprised. This film is much more violent than I expected and bloodier as well. There were some effects that were brutal and even made me cringe. I heard a critique that they cut away a bit early, but I actually like that. It gave me enough while still allowing my imagination to fill in the blanks, which is great. There is quite a bit of CGI, which I’m not the biggest fan of, but I think it looks fine here. The film is also shot very well.

The final thing to cover would be the soundtrack of the film. To be honest it really didn’t stand out for the most part. I think they do some good things with the sound design, like the voice that is calling out to Brandon. I thought that was pretty creepy. They also do well with having other sounds, especially if they use electricity to mess up when Brandon is around. I like that aspect. I do have to say, the song at the end of the film and to start the credits I love called Bad Guy. I actually added it to my Spotify I enjoyed it that much.

Now with that said, I came in thinking I would enjoy this film, but I wasn’t expecting to like it as much as I did. I think that the concept of the film is really terrifying and I like the idea of taking a superhero and making him evil. The idea behind it is definitely plausible with someone as powerful as Brandon. I think the acting is good in bringing this to life. The film is paced well, I think it builds tension and the ending was really good. The effects were more brutal and I loved it. The soundtrack during the film didn’t necessarily stand out, but it fit for what was needed. The sound design was pretty solid for sure. Overall I’d say this is a really good film and would recommend checking this out, especially if you like super hero films.