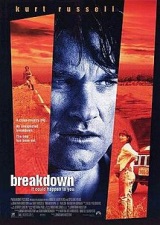 In this film, we have the married couple of Kurt Russell and Kathleen Quinlan. They are moving across the country for a new job. Russell is behind the wheel and while trying to find something to drink, he almost rear-ends a truck. They just miss it and they continue on.

At the next gas station, the man from the truck gives a piece of mind to Russell. After that, they continue on. They don’t get too far though before their SUV stops working and they breakdown on the side of the road.

A truck driver, played by J.T. Walsh, comes up and offers to help them with a ride to a diner up the road. At first they don’t take his offer, but in the end, Quinlan accepts. Russell stays with the vehicle.

Deciding to give it another look under the hood, Russell finds some couplings undone and once they’re connected again, it starts right up. He drives to the diner where his wife was supposed to meet him and finds she is not there. Confused, a panicked Russell goes to look for his wife that uncovers a plot of kidnapping, ransom and murder. Can Russell uncover who is behind this and find his wife before it is too late?

This film is actually quite good. It is kind of eerie being out west where there is a lot of open road and it can be quite disorienting as well. You don’t know who is involved and who isn’t. On top of that the guys who are part of the plot all play their roles well and all are convincing that they might not be involved. Russell plays the great hero yet again, but this is a little different as he comes off as a guy who isn’t rugged and manly, but still fills the hero role.

The plot thickens a little bit and slows down. It gets like that because the plot isn’t all that complex, but it tries to come off that it is. I can’t say more without giving away too much, but that is really the only problem I had with this film.

This film is being added to the horror film research due to the fact that we have a group that plans out kidnappings and ways to not get caught doing it. These guys are professional at it and that is scary. What makes it even worse is that Russell for a good portion of this cannot find any sort of proof. I also like that they are not the first people to have this happen to them.

I’d recommend this if you like Russell and would also tell you to give it a view if you like these type of thrillers. It is pretty solid film for the genre and worth a viewing.