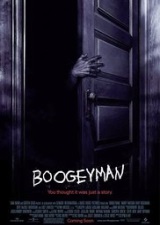 This film begins with a boy who is trying to go to sleep, but he is scared. The boy is played by Aaron Murphy. He sees a something sitting on a chair and he thinks that it is a person, but he turns his light on to see that it is just a flannel shirt that is being held up by a baseball bat. He turns the light off and the shirt stands up. He turns the light back on and it falls to the floor. He looks around his room, creeped out by a bird toy he has hanging from the ceiling, a scary looking action figure and an electric ball he uses as a night light. He thinks there is something in his closet and he knocks his glass of water off the nightstand, breaking the glass. His father comes in, played by Charles Mesure. He checks the closet and something takes him inside it.

We then shift to present day. It informs us that we are 15 years in the future. Murphy has grown up to be played by Barry Watson. He is at a party with his girlfriend, played by Tory Mussett. That weekend they are going to her parent’s house so Watson can meet them.

Later that night, Watson goes home and we see that he sleeps with lights on; he took all of the doors off of his cabinets and closets. He is still scared of what was in the closet that took his dad. Watson does get a call from his uncle, asking him to come see his mother as she is not doing too good.

Watson meets Mussett at her parent’s house. There is an awkward dinner as Mussett’s parents are rich and they are trying to learn more about him. We learn that the story being told is that Watson’s father left his family and that his relationship with his mother is estranged. Watson was raised by his uncle and lived in a small room in the back of a bar.

That night Watson has a nightmare that his mother, played by Lucy Lawless, is in his room with him, begging him to come see her. Mussett is actually in the room with him, trying to calm him down. Watson’s phone starts ringing and she tries to convince him to ignore it. It turns out though, that Watson’s mother has passed away.

Before going to the funeral, Watson goes to a children’s psychiatric hospital he has been going since he was a child. The doctor there tries to convince him to stay in the house from his childhood to get over his fear of the boogeyman. Before he leaves though, he sees a young girl freaking out because of an opening in her ceiling.

While at the funeral, Watson meets up with his uncle, played by Philip Gordon. He also sees his childhood friend, played by Emily Deschanel. There is also a young girl that is standing back from everyone who stares at Watson; she is played by Skye McCole Bartusiak. Watson convinces his uncle to let him stay in the house for the night, to go through his mother’s things. Gordon is leery because the house has fallen into disrepair and he doesn’t what his work messed up, but he relents.

Deschanel comes by the house, riding her horse and she catches up with Watson. She learns a little about him and his new life since leaving the area. Odd things happen though after she leaves. He thinks something attacks him in his closet. He also finds Bartusiak hiding in a workshop on the property.

Mussett then shows up and finds Watson freaked out. He agrees to go with her and they get a motel room. She gets into the bathtub while he goes to get ice to make them drinks from the mini-bar. When he comes back in, she is gone. He checks the room and yells outside, but he can’t find her. He then checks the closet and ends up back at the house, where Deschanel is, as she brought him dinner.

They go back to the motel and do not find Mussett. They do find a bathtub full of water, her clothes and two drinks. On the edge of the tub are bloody fingerprints. What happened to Mussett? Did Watson hurt her or is there really a boogeyman? Who is Bartusiak and how does she fit into all of this? What is really going on here?

I have to lead off by saying that I originally watched this film, because I am big Stephen King fan and this is very loosely based off of a short story he wrote with the same name. The only thing that they have in common is the beginning back-story where a boy watches his father get pulled into his closet by the boogeyman and he’s never seen again. The boy then decides to face his fears against the creature. What I really liked about this film though is the surreal atmosphere that is tries to convey. It does make you consider for a time if Watson has lost his mind and killed Mussett. Also makes you wonder more about the children that are missing. I do not mind what the basis or the look of the creature was, as I have seen much worse in films.

Now I will say though that I was disappointed with this film. The film itself is boring and not a lot happens. It moves very slow and it isn’t until with about 30 minutes left does it start to pick up and by then it is too late. I felt the acting across the board was very bland. Watson has a look of confusion and disheveled the whole time. I get he is confused when he ends up back at his house, but how would he completely forget what room he was or not realize he had the key in his pocket? I also do not like that the creature that is created was all from Watson. There is no basis for this and why it would start to go after other people. I think there needed to be a little bit more back-story for this conclusion to be made.

With that said, this film has a good concept and could have been much better, but unfortunately it falls well short for me. I like they attempted to make a King short story into a film, but I think better writing was needed for this one. I like the surreal atmosphere that was created, but I think more depth was required for it be executed properly. The acting was flat and the film itself is boring. More back-story was needed for me to fully enjoy this one. I wouldn’t recommend this one unless you want to see a loose King adaptation or interested in seeing the whole series, as it has spawned two sequels somehow.