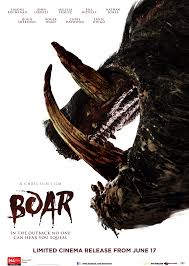 This was a film that I heard about earlier this year as people were checking it out. I was intrigued by the concept as I dig creature features to an extent and this really did feel like nature run amok type film where we have an animal that just happened to get like it does and start to kill people. The synopsis is in the harsh, yet beautiful Australian outback lives a beast, an animal of staggering size, with a ruthless, driving need for blood and destruction. It cares for none, defends its territory with brutal force and kills with a raw, animalistic savagery unlike any have seen before.

We start this with a couple driving down a country road. The man stops as he almost hits a rabbit. This wakes up his lady and she is questioning what is going on. A bunch of wild pigs then run past and we hear something much bigger. We can only get a get a glimpse of it, but whatever it is, it hits the side of their vehicle with ferocity.

From here we follow a couple of different groups of people. Traveling out to a family farm is Bruce (Bill Moseley) with his wife Debbie (Simone Buchanan). There is also her daughter Ella (Christie-Lee Britton), her boyfriend Robert (Hugh Sheridan) and Debbie’s son Bart (Griffin Walsh). They’re out to see her cousin Bernie (Nathan Jones) who is a monster of a man.

In town there’s a bar that is ran by Sasha (Mellisa Tkautz). Her father is Ken (John Jarratt) and he hangs out with his friend Blue (Roger Ward) a lot. There’s talk about something knocking down fences in the area and that livestock are coming up missing. No one really knows what the cause of this is though. There are rumors though of a giant boar, but that is chalked up to local legend like Drop Bears.

That is until that night when Ken and Blue are out drinking in the middle of nowhere. They notice nearby is a campsite on a plot of land they shouldn’t be on. They decided to check it out. Before they can get there, we see Hanna (Madeleine Kennedy) along with her boyfriend as they hear something outside their tent. We get to confirm that it is a giant, man-eating boar that is terrorizing the countryside. Can it be stopped though from wrecking even more havoc?

As I started off here stating that creature features aren’t films that I tend to go to first. When I find one I like, I normally end up loving them. I will also watch it especially if its fun. We do get some of that here for sure. Wild pigs are something that is quite scary, even though I’ve never lived in an area with them. I did grow up in the country where friends raised pigs and I know how mean they can be. It is terrifying to have one grow to the size of the one we get here for sure.

That is something that I can appreciate. This is based in some reality as is it unlikely a boar would grow to this size? Of course, it will probably die of some natural cause before it could. There isn’t some wild explanation though. It really is just nature and something like this would be absolutely terrifying. It is also part of the reason I’m not a fan of camping in legit wilderness. Plus all of the horror movies I’ve seen don’t help either.

I’m going to shift to this to the acting, as I think we get an interesting cast of characters. When I saw Jarratt’s name pop up in the credits, I was stoked. I know him as the villain in Wolf Creek, but since then I’ve seen in Next of Kin where he plays a role more similar to this one. Seeing him with a beard was different, but I really dug him and his interactions with Ward as well as his daughter in the movie Tkautz. There’s such a charm to listen to them talking and using slang that just felt natural. Then we also get the other family where Moseley is from the United States, but married Buchanan. He doesn’t necessarily understand all of the slang, but Debbie and her children definitely help him along. I feel all of the characters are distinct, especially Jones, that it really helps make this more enjoyable.

Not everything really worked though. Despite its runtime of 96 minute I did find myself slightly bored at times. I think that this is in part as they didn’t do the greatest job in the editing of switching between these groups where you kind of forget about some of them at times. I get that there sticking with the group closest to danger and it makes sense as this creature can’t get to the next group that fast as there is an expanse of the land, which makes it tough to do a movie like this. I do think that it is entertaining, especially when it settles on Bruce and Debbie’s family for sure though. I do think that the ending was a bit of a cop out though, as I was hoping it was going to be as mean-spirited as I thought it was going. That did bother me a bit as well.

That takes me to something else that I’m going to harp on, which were the effects. To start with the good, I like the practical effects for the most part. There was really only a time or two where I could tell it was a prosthetic and it was really the aftermath of wounds. The practical effect of the giant boar was good. My big problem was with the CGI though. Early on we get a group of normal size pigs that are completely CGI. There were some computer effects that didn’t bother me, but it was more bad than good on that front. It was shot fine though aside from that.

Now with that said, this isn’t a great movie, but I did have some fun with it. I really enjoyed the banter of the townspeople and just getting sucked into these people from Australia talk. I do like the tension of this giant monster attacking people as there is some realism to this, if a boar could ever grow to be this big. I thought the acting was good and most of the practical effects. There were some issues with the pacing from the editing for me, plus the CGI wasn’t great. The soundtrack didn’t really stand out to me, but it also didn’t hurt it. My last gripe would just be that I wish it would have stayed as mean-spirited as I thought it was going, because the ending is a bit of a cop out. Overall I’d say this is a slightly above average film, but one I wouldn’t necessarily go back to often.