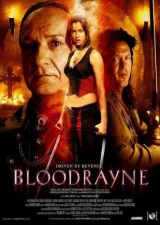 This film starts with a group of three people coming up to a bar. This film takes play during the 14th century. The leader of the group is played by Michael Madsen. With him are Matthew Davis and Michelle Rodriguez. We see that a man comes up to order a drink. Davis uses a mirror to realize that the man is a vampire and he is killed. The bartender tells them about a carnival that is traveling nearby and he puts a poster then. He goes into telling us about the main attraction.

We then see that a woman, played by Kristianna Loken, is being held against her will. Water is poured on her arm and it burns it horribly. Her arm is then slashed with a knife. A sheep then gets its throat slashed and the blood is collected in a goblet. Loken drinks it and she is healed. She is then thrown back into her wagon cell. A woman comes up and tells her they will escape soon.

The film then shifts to the most powerful vampire, played by Ben Kingsley. He learns of something known as a dhampire has been found. Kingsley’s second in command is played by Will Sanderson. He is told to go and find her.

The vampire hunters start their journey to find Loken, but she escapes when the strongman attempts to rape her. She goes on a blood rampage that kills everyone, including her friend. Before she dies, she gives Loken her swords. By the time the vampire hunters arrive, it is morning and the carnage has already happened.

Loken then seeks out a fortune teller, played by Geraldine Chaplin. She tells Loken what she is, about her father who is Kingsley and about three talismans that Kingsley seeks out. Chaplin directs Loken where to find the first one, which is an eye of a vampire who was more powerful than Kingsley. Chaplin wants her to do it to save the world, where Loken just wants revenge. We learn that Loken was created when Kingsley raped her mother. He then kills her as well.

Sanderson reports back to Kingsley that Loken has escaped and is going for the eye. Kingsley tells him to follow her and get it from her. He states that her survival is not required.

Loken seeks out a monastery where she finds refuge. Food and a bed are given to her. During the night, she is drawn to a cellar. Before she enters it, a monk played by Udo Kier sees her go inside. Loken finds a locked door with the key around the neck of a monstrous guard. They do battle with Loken killing him. The key reveals a room with a trap of spinning blades. Loken uses her vampirism powers and swords to get to the treasure. By grabbing it, water starts to flood into the room. Loken hangs from her sword in the ceiling and looks into the treasure. She absorbs it and water no longer burns her. It also stops the water from filling the room. The monk that let her in opens the door. The monastery is then attacked by Sanderson and Loken is taken hostage.

With morning coming, they seek refuge with a vampire who has a harem of women and debauchery going on around him. This vampire is played by Meat Loaf. He decides that he is going to keep Loken, despite what Sanderson says. The coven is destroyed when the vampire hunters arrive. Loken is taken back to Brimstone, an organization that is out to stop Kingsley and they have a castle.

It should be pointed out that Rodriguez’s father is played by Billy Zane. He is a vampire and he has an uneasy alliance with Kingsley. He is a former member of Brimstone, but will not reveal to Kingsley where the castle is located. Zane is out to collect the artifacts to become the strongest vampire.

Loken is hell-bent on defeating her father. She does listen to Madsen and trains with Brimstone. Rodriguez doesn’t like it. Will she become strong enough to defeat her father? Can she recover the heart to become even stronger? Can Kingsley be defeated? How strong is Brimstone?

I have to say that I originally watched this film, because I played the first video game, which is Rayne fighting Nazis. I thought that was a great concept. This film takes place well before that and could almost be considered telling the back-story for the game. This film does bring up what the game was out to do, where the Nazis are trying to collect parts of Dracula to make Hitler immortal. The only difference for this is that Kingsley is out for them to become a vampire with no weakness. This film is quite bloody and violent, which I did like. Loken is also very nice to look at and she gets nude in the film. The scene with Meat Loaf also has a few nude women as well.

I did have a lot of issues with this film. The story to this film is not as coherent as it is laid out. This film has way too many flashbacks. An example is the film shows Loken all bloody and running, then it uses a flashback to show us what happened. We get a few more flashbacks filling in her story as a child and flashbacks showing us scenes we’ve already seen. This is jarring and hard to follow at times. Rodriguez’s death was weak. The acting in general was weak, which is sad because the cast for this film was strong. This is just a disappointment across the board. I also was confused to that fact that she is a dhampire because her mother was attacked by Kingsley, but she wasn’t pregnant with Rayne as she was a little girl who watched it happen. How does this make her part vampire? Something else that was not thought through.

With that said, I wouldn’t view this film unless you really like bad vampire films. This film has a great cast that fall flat. I think a lot of this was due to director Uwe Boll who can’t seem to just make a coherent film that is good. The nudity, blood and violence are pretty good, but not enough to save this film. It is quite boring, like the rest of the films in this series. If you’re a huge fan of the video games, I don’t think you’d even like this film, but if you’re interested to see Rayne brought to the screen, then give this a viewing. If not, there are much better vampire films out there.