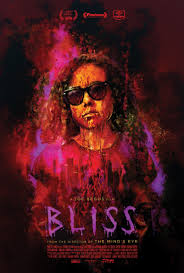 This film I saw a poster for at the Gateway Film Center and heard some buzz about this. I know that it played at the Nightmares Film Festival as well ahead of me seeing it. The person who does the programming there was impressed by it, so it went on a list for me to see. When I saw it was showing the following weekend, I decided to check it out. I’m now giving it a second viewing as part of the Summer Series for the Podcast Under the Stairs. The synopsis is a brilliant painter facing the worst creative block of her life turns into anything she can to complete her masterpiece, spiraling into a hallucinatory hellscape of drugs, sex and murder in the sleazy underbelly of Los Angeles.

We start this in the apartment of Dezzy (Dora Madison). She is a painter that is currently struggling from the synopsis. She hasn’t been able to paint in months. She’s looking over a canvas that is supposed to be turned in for a gallery opening and all she has is the base. Her boyfriend, Clive (Jeremy Gardner), asks her to give him a ride. She tells him she doesn’t have time, but he does get her to agree. The problem is though he makes her late. As their leaving, her landlord Lance (Mark Beltzman) yells at her as she’s behind on her rent and he threatens to throw her out. She does get him to calm down and promises him the check.

She then goes to see her agent, David (Chris McKenna) and he asks about the piece that she was supposed to be finished with. She asks for an extension, but he tells her that he needs something to go on to Nikki St. Jean (Rachel Avery). She tells him that she can’t do that and he drops her as a client.

This causes her to go into a tailspin and she calls up Hadrian (Graham Skipper). She asks if he is holding because she needs something to give her inspiration. When she arrives at his place, there are three guys playing poker. They are Pops (George Wendt), Abe (Abraham Benrubi) and Bobby (Josh Ethier). She goes into the back room with Hadrian and he shows her the drugs he has. She decides on one called Diablo and he gives her a sample.

We see her go on a bender that night that leads her to Courtney (Tru Collins) and Ronnie (Rhys Wakefield). This involves a lot of drug use and them having a sexual encounter. When Dezzy comes out of it, she did some painting, but she doesn’t remember it. When Clive shows up and asks her to come out for a drink. She has had issues with drugs in the past and she’s relapsing into the hard stuff that leads her down a dark path that results in her painting. He’s not happy about what he finds as he does care about her, but also into a new addiction that puts the lives of everyone around her in jeopardy.

Now I’m glad that I came in as blind as I did with this film, so I didn’t have any preconceived notions of what to expect. Where I’ll start is that this movie is an interesting allegory. Dezzy is, of course, a painter. This makes sense as many great people in the arts have battled addictions. She was clean for 3 months and it isn’t shocking that is the same length of her not being able to paint. As she falls back into this, she gets inspiration. There is a problem as she cannot use responsibly.

That will take me to the painting aspect here. I find this interesting as when she was ‘sober’, she couldn’t paint and put herself in a bad position. She never gives up alcohol and marijuana, but just the hard stuff. The moment she relapses though, she is creative again. There is another addiction that Courtney and Ronnie introduce her to. It is when she goes into these blackouts that she is productive. I like the idea that she is strung out, hangover, going through withdrawals, but despite all of this, she must keep going in her eyes.

As Dezzy is working on her masterpiece, she is hurting those around her to do so. This is another aspect of addiction, hurting those that care about you. I like that the faces in the painting seem to look like those that she hurts during her black out. I can see how drugs and her producing can affect the lives around her. She can’t give this up though as she just needs to get it out of her, even if it kills her in the process.

The last part of the story I’ll touch on is a possible supernatural aspect to this film as well. What I really like though is that when we first see it, she is on a bender. We don’t know if she is just hallucinating the things or if they’re really happening. This is a fine line to tiptoe though. Everything I’ve said can be taken as psychological and a grounded explanation. I do like that it does show us the truth of the matter and I like what the reveal is that has happened to her. It is interesting that she doesn’t have a lot of self-control, so I could buy that she wouldn’t be able to control this new addiction. I do believe the supernatural things are happening as well.

I’ll shift next to the pacing of the movie, which I think is good. I like that it doesn’t waste any time jumping right in. It builds tension through worrying about what Dezzy is dealing with. We see that each time she loses control, she is struggling when she wakes up from it. What is interesting though, we see her panic and consider staying sober. It doesn’t take long for her to change her mind. I do like how it ends and seeing the final product she is working on as well. The editing is also interesting here. It shows us her black outs and how weird things are. As I said earlier, that is how I remember some things during mine as it is quite incoherent. We get a manic pace, which is fitting here and the low runtime helps.

To the acting here, I thought that Madison was great. In the beginning we see that she’s a bit desperate. She hasn’t been able to paint in months and it’s wearing on her. We then see her relapse and descend into drug induced madness. I feel for her, even though she needs help, but she isn’t ready for it. We do get character growth; it is just negative. She is also attractive and we get to see her nude quite a bit, which I didn’t mind at all. Collins is interesting as well as Wakefield. They’re bad influences and just are free spirits. Their take on the creature in this is a curious one that is scary. Gardner is kind of a jerk, but I liked that he really does care about Dezzy, he’s just not the best for her. Skipper and the rest of the cast round out the film for what was needed, with nice cameos by Wendt, Benrubi and Ethier.

As to the effects, cinematography and soundtrack, I think they were good as well. I’ve touched on there’s a bit of a psychedelic feel while she is high. Since I’ve never taken drugs that would do that to me, I would just assume this is how it would be experience it. I feel like there’s a bit of haziness when it is day, which does feel like a hangover. That I can confirm as how it feels. Going from there, the blood and the gore we get was good. It was done practically, which I’m a fan of. I wasn’t expecting that at all. The cinematography is also well done for the reasons I’ve said. It just looks great and fits the grimy feel we need here. The soundtrack is used well and is enhances some the scenes. I could feel the sense of dread or anxiety growing. It isn’t necessarily music that I would revisit, but it works for what they needed.

Now with that said, I enjoyed this film. I wasn’t sure what I was getting into, but what I saw blew me away after that first viewing. There’s a cautionary tale here of drug use and losing control. What we see in the movie, I felt was a good representation of going too far with them, from personal experience. I like that we build to the supernatural aspect and it was interesting. I think that the acting of Madison was good and brought the character of Dezzy to life. The rest of the cast really did round out for what they needed. It has a manic pace that works. The effects were good and the soundtrack fit for what they needed, with moments where it really enhanced the scenes. I’ll admit, I love this film and was a contender for my favorite film of the year. I’m not as high as that first viewing, but this is still a good one.