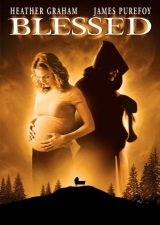 This film follows a married couple. The wife is played by Heather Graham, who is a teacher. Her husband is a writer, played by James Purefoy. She comes home and he tells her that an agent finally read his book and she decided to represent him. The bad news is that he has lost his job. They did pay him a sizable severance pay. The couple decides to try to have a baby and go to see a doctor. He is played by Michael J. Reynolds and he tells Graham that she will need to do to a clinic if she wants to have a child.

They decide to rent a cabin and go to Lakeview, New York for the treatments. The doctor she sees there is Debora Weston. She believes that the treatments will be a success, but that it may take a couple of times for it to work. We do see something odd with a metal tube that looks to be glowing red.

Graham meets a local, played by Stella Stevens, who is into real estate. Later that night, Graham hears something and wakes up. She watches as her neighbors flee in a hurry. She also sees a man wearing a hood walking down the road.

We then see that the couple stops and they are attacked by the hooded figure. He hits the woman, who is pregnant in the stomach with a stick.

Stevens invites Graham and Purefoy to a party. There Stevens introduces Purefoy to her friend, who has a publishing company. This man is played by David Hemmings. They go off and talk. While he is gone, Graham is approached by Alan McKenna. She blows him off and seeks out her husband. She does tell Stevens they are planning to return to New York City.

Graham learns she is pregnant and Purefoy is happy. They unfortunately find that their apartment in the city has been broken into, defaced and in shambles. Graham is called by Stevens, letting her know that their neighbor’s house is available if they would like to rent it. The rent also had been paid off for the next three months as well. They agree to.

Purefoy runs into some issues with writer’s block. His agent is played by Fionnula Flanagan. They visit Hemmings and he tells them that he is going to give Purefoy an advance of $100,000. Flanagan is shocked and wonders why he is doing it, but gladly accepts.

The couple is visited by two detectives, one of them is McKenna and his partner is William Hootkins. They are asking questions about the couple and if they saw anything suspicious. She tells them about what she saw the last night they were seen and about the hooded figure.

Graham then goes and meets to the coffee shop and meets a foreign man, played by Andy Serkis. He tells her that he is in the sole business, working with shoes. She sits with him and they talk for a little bit.

Graham then learns that she is having twins. Purefoy is excited, but their relationship starts to be strained when he breaks his writer’s block. She also doesn’t like Hemmings and her husband’s relationship with him. Is Graham crazy or is her pregnancy making her thinks things? Who is this hooded figure? Who is Serkis really? Is there something wrong with her babies or is it in her mind?

I do think this film does some good things. This film is very similar to Rosemary’s Baby. I really like films where we have a woman who is questionable when it comes to her mental state. We all know that pregnant women have a lot going on with their hormones as well as wanting to protect their children. The film does bring attention to us when it comes to certain things and it makes us wonder if there is a plot or not. I didn’t mind the ending as well. I do think this film is interesting in bringing up some Christian mythology and using it to add to the overall story of what could be happening. I also like that they decided for Graham to have twins as well, it really needed some things to make it different from Rosemary’s Baby.

The first thing with this film is that most of the acting is subpar. Graham overact, Purefoy who is a solid actor was not very good either. Serkis I felt did good in his role, but in general the rest weren’t. I also did not like all the film trying to show us creepy things and using sounds to show that the Devil or demons could be involved. I felt that is cheesy and trying to go for cheap scares that didn’t work.

As I have stated, the story for this one is pretty good. It isn’t completely original, but it did do something differently to try to get it stand apart. The acting though is not good across the board. The film does do well at making us wonder if Graham is crazy or if she really has discovered a plot against her and babies. This is not the best film in the genre, but it is still not the worst. I would say its average.