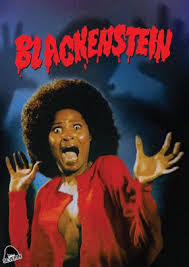 Now I’ll admit, as a younger horror fan, these were the movies I would have avoided. There was a stretch where I was a bit more pretentious and this movie would be one I’d put my nose up to. Once I saw Blacula and realized that these movies actually have some substance, despite many of them being a bit more whimsical. I would say the Horror Noire: A History of Black Horror really helped as well. This was one I saw due to October movie challenges I’m doing as well. The synopsis here is Eddie (Joe De Sue) is a Vietnam veteran who loses his arms and legs when he steps on a land mine. A brilliant surgeon is able to attach new limbs, but his jealous assistant switches the DNA injects, transforming him into a gigantic killer.

We start this movie off inside of a lab. It doesn’t tell us at first, but the man working in it is Dr. Stein (John Hart). The movie then takes us to the airport where Dr. Winifred Walker (Ivory Stone) has arrived in town. She goes to see Dr. Stein and we learn that she is a former student. Dr. Stein is world renowned as he won a Nobel Prize in science due to cracking the DNA genetics code and is doing ground breaking research. Winifred wants to work under him and he agrees. She is joining his other assistant, Malcomb (Roosevelt Jackson).

They go on rounds to see the different patients in Dr. Stein’s care. There is Eleanor (Andrea King) who is 90 and the DNA injections she is getting have rejuvenated her skin so she looks 40. She needs one every 12 hours though as he hasn’t fond an agent yet to make it stick. The other patient is Bruno Stragor (Nick Bolin). He lost his leg and Dr. Stein attached a new one. The injections giving to him have another side effect. His other leg has tiger stripes and Bruno is prone to angry outburst. He’s quite strong so when they’re coming on, he has to be put in a straight jacket.

The reason for Winifred coming here is that her fiancé is a Vietnam vet as the synopsis states. He stepped on a landmine and lost both his arms and legs. He is extremely depressed, broke off their engagement and given up on life. She wants Dr. Stein to see if he can help Eddie. He does agree to come see him in the hospital.

It is there we get to meet Eddie. An orderly, John Dennis, is rude to Eddie. There is some deep seeded hatred here and it appears the orderly didn’t make the cut to go into Vietnam. He’s bitter and taking this out on the bedridden man. This orderly leaves when the doctors arrive where Eddie is quite cold to them. He does agree to be part of this experimental treatment.

Things are going well with his treatments until Malcomb expresses his love for Winifred. She politely tells him that she loves Eddie. This upsets Malcomb and he switches Eddie’s DNA injections with Bruno’s. The side effects for Eddie are disastrous as he becomes the monstrous Blackenstein. He rampages the area around the mansion and the cops are called in to figure what is going on here.

That’s where I want to leave the recap here and get into my thoughts on this movie. Since I like to start with the positives, this is a fun update to the original Frankenstein movie. I dig that we have Dr. Winifred Walker and Malcomb having some pretty important roles. I do find it interesting though that Dr. Stein is white in this blaxploitation movie though. It is even more so that our villain is truly Malcomb, his assistant who is black, since these movies would usually have these reversed. I’ll give is credit there for being different.

Something else I liked was Eddie being somewhat of a hero. Not in the sense that he won medals, but he did serve in the military which left him in the state that he is in. I love that the movie gives us this bitter orderly and he really sounds like a lot of people I see on social media. I really don’t believe the story he’s telling about himself physically, but it is a great that he was deemed unfit to serve. He also gets his just punishment later in the movie for what he does to Eddie.

Going back to the update of Universal Frankenstein film, we get Blackenstein running amok in the area around the mansion. It was interesting that the first two couples that are attacked are white. Most of the attacks are also on white women as well. This does come off racist and I have a feeling the attack outside of the nightclub was to help offset this. I personally don’t mind it as the neighborhood that it is taking place makes a lot of sense as to who would be attacked.

Speaking of the attacks, I should briefly talk about the effects. Since I’ve said it a few times, Blackenstein looks very similar to the Boris Karloff take on the monster. The only thing that is confusing is where he did he get the outfit that he’s wearing when he changes? They did go practical with the effects. I think a bit more blood could have been used for realism, but what we do get looks fine. When Eddie is supposed to be just a torso and head, it is pretty funny they just film him in a way where they focus on the shoulders up. You could tell he’s normal under the blanket. There are some computer effects used that were pretty weak to be honest. The cinematography was fine for the most part. I just got annoyed with the constant establishing shot of the mansion exterior. It just feels that it was padding.

As for the acting, Hart is solid as Dr. Stein. He doesn’t really add a lot with his performance, but he looks like he could be this character. I really liked Stone though. She gives some good emotion and we briefly see her topless. De Sue is pretty stoic as well. It does work as he’s depressed from his plight. It also makes it hard to feel bad for him, even when he becomes a monster. Jackson plays this brooding villain well, but he doesn’t stand out. The rest of the cast was fine in my opinion.

There isn’t much to say about the soundtrack and score here. I like that they made the decision to play more soulful music throughout. That fits for what they’re going for. What I really wanted to give credit to though is the nightclub singer of Cardella Di Milo. She had a great voice and the joke that the comedian there of Andy C actually made me crack up as well.

Now with that said, this movie is a fun update to Frankenstein for the blaxploitation era of the 1970s. I think there is a bit of social commentary there, but the movie isn’t as progressive as I would expect for some of the ones I’ve seen from this subgenre. The effects aren’t very good aside from a few things here or there. Acting was pretty basic and the soundtrack just fit for what was needed. Shout-outs though to Stone, Andy C and Di Milo though. I’d rate this as below average though. There are just too many little things and not enough to really push my rating over the top unfortunately. I’d recommend it if you want something a bit more fun or you like this subgenre and you’re out to see all that you can.