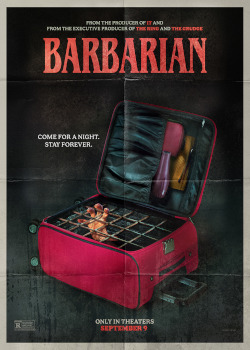 This is a movie that caught my interest from trailers at the Gateway Film Center. Now I don’t watch them, but I caught the beginning of this one. It looked intriguing and then I stopped watching. Jaime was on the fence though. There are certain things that triggering for her and she wasn’t sure if this film would go there. I found some articles for her and relayed a bit of information I could find to help make her decision. She did end up coming with me as well when we caught it opening night at the theater.

Synopsis: a woman staying at an Airbnb discovers that the house she rented is not what it seems.

We start this off seeing Tess (Georgina Campbell) arrive at the place from the synopsis. She looks tired and is frustrated to find that the key isn’t in the lockbox like the message said. She goes back out to her vehicle when a light comes on. After ringing the bell, Keith (Bill Skarsgård) answers. He lets her in and they try to sort this out. It appears that they’re both renting the same place, just on two different platforms. He is a nice guy and offers her the bedroom, offering to sleep on the couch so that way in the morning they can figure this out. The two stay up late while the sheets are cleaned as well.

In the night, something happens. Tess’ door opens and she wakes up. She sees Keith sleeping on the couch, having a nightmare. She wakes him up and he freaks out. While this happens, the door to the basement closes.

It gets weirder from there. Tess is told that she shouldn’t be staying in that neighborhood. She doesn’t think it is that bad, but seeing it in the daylight, it is even spookier than the previous night. She can see how rundown it is and there doesn’t seem to be any neighbors. It reminds me of Don’t Breathe. Tess gets chased by Andre (Jaymes Butler), who is a homeless man. What he is saying though is intriguing as he doesn’t want her to go into the house.

This is just the beginning of the nightmare when Tess discovers a hidden hallway in the basement. Keith comes back and she tells him about it. He doesn’t believe her at first, but he finds even more. There is also another story involving AJ (Justin Long), who is the actual owner of the house. He is from Detroit but living in Los Angeles. He decides to come back as well.

That is where I’m going to leave my recap and introduction to some of the important characters. What I want to establish here is that this is a movie you should come in knowing as little as possible. An article I read about it ahead of time said the same thing. With that taken care of, this opening sequence got me to thinking. This is terrifying. Tess arrives on a dark, rainy night. She notices that there are no streetlights and many of the houses are dark. She is defensive and for good reason. I feel bad that she must be this way, but to be honest, in this situation I’d be nervous. It is a fear of mine that someone else would be in the place I’m staying or comes in while I’m there. That is a good starting place for this movie.

Where I want to go a bit of social commentary this movie explores. There is the idea of gender norms. During the talk between Tess and Keith, she brings up that if the roles were reversed, she would not let him in. As a male, he feels safer. Jaime confirmed this afterwards as well. I didn’t need her, but we like to explore themes after seeing something. I love that what this couple in the movie talks about comes into play later when they explore the hidden section of the house. We also get things with the character of AJ. He is accused of something and we see how it ruins his life. What is interesting to me though are the things that he says afterwards and his actions. I think that Long was perfectly cast there since he comes off as a nice guy. He can also play a character like this which just slightly stretches his range in the best way. Then to shift over to Tess once more, there is the moment with Andre as well when she arrives back at the house. There is more to this, but that would go into spoilers which I don’t necessarily want to do. That would terrify me being chased by someone like him who seems crazy.

What I will say is that this gets wild. While in the theater, I realized that this is a modern take on the ‘old dark house’ with the secret tunnels under the house. What is hidden down there is the true horror of this. I saw coming in that Richard Brake was in the movie, so I knew he had to be involved there. The only thing that I’ll say beyond that is this would make an interesting double feature with 2022’s X. They’re not the same, don’t think that coming in. They do have some interesting parallels. Before moving away here, I did want to say there are some loose ends that I wanted explored just a bit more. There is also some comedy near the end that I could have done without.

Now to move away from the story, let me go over to the acting. I thought that Campbell was good as our lead. She is a great representation of a strong, independent woman trying to navigate this situation. I like that she is shows what real women deal with as well. Skarsgård is also good. I like him a good representation of a nice guy. The movie makes you wonder about him. I’m not going to reveal if we should or not though. The counterpart to him is Long. I’ve already said that I enjoyed his performance. Other than that, I thought Brake, Butler and the rest of the cast were good. Special credit to cameos of the voices of Kate Bosworth and Sara Paxton. Overall, the acting here is good. They show real fear when they need to and I appreciate it.

The last things to go into would be with the filmmaking. The cinematography here is great. We get some excellent shots that held my attention. They do things with framing as well with using shadows. Being in the tunnels is claustrophobic which I can appreciate as well. I’d even include the editing here to seamlessly mesh these three stories that come together. Other than that, I thought what they did with the soundtrack and design were both solid as well.

In conclusion, I enjoyed this quite a bit. We get an interesting set up and premise. From there, it just gets wilder as we go. The acting is good across the board. I thought the filmmaking was on point with special credit to the cinematography. If I have any gripes here, there are some story elements that are left open as well as some unnecessary comedy. Even though I have those issues, they didn’t ruin my enjoyment. I would recommend seeing this movie as this is up there as one of my favorites at the time of writing this for the year. I’m hoping I can revisit it as well.