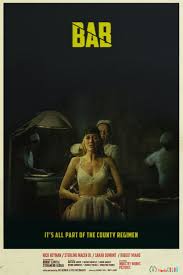 This is another movie that I never heard of until the Nightmares Film Festival. This is also one that I’m not entirely sure if it is horror either. I think that it is dark enough with some of the backdrops and with subject matter of what is happening that I’m including this as an adjunct film for sure. I also got to see this movie for its world premiere as well. The synopsis here is in a dying 1950’s town, a mysterious traveler propositions a young farmhand, Donnie (Nick Heyman), to help take down the town’s tyrannical leader in exchange for release of Donnie’s mother from a primitive mind rehabilitation center.

We actually start this movie off back in 1946. A young mother comes to an older rundown building. On the radio we’re hearing a broadcast calling for sin be cleansed. This mother is Bab (Sarah Dumont). With her are her son of Donnie (Kingston Vernes) and daughter of Bean. She tells Donnie to watch after her. He then sneaks into the building to see the treatment that will cause his mother to stay there. The boy gets spooked by the man who runs this place, Bascum (Robert Miano). He’s an older man in a back brace.

The movie then shifts into the future. Donnie is now an adult and portrayed by Heyman. He works with Brenton (David Gridley) at a farm where Donnie is the best at separating the eggs. They like to go to Miss Sheri’s (Brynn Horrocks) where they can get meat for meals. Donnie takes care of his sister, Bean (Jessica Treska) and we get an awkward scene where he is beating up her teacher. It is in the 1950’s and Bean had him over the house to help study. It isn’t appropriate, but Donnie went too far with teaching him it isn’t right. Donnie also helps out at a local motel run by Mr. Harold (Mathew Greer).

This town though is in living in fear of Bascum. He is in charge of the radio broadcasts going out. His men patrol to keep drugs and prostitution from being done within the town. Bascum rules with fear as we see amputation is the punishment for being caught. Donnie doesn’t like it, but it doesn’t affect him necessarily either. He isn’t a fan of Bascum for what happened to his mother as she is in an iron lung these days. There isn’t much of a response from her. What does push him though something happening to Mr. Harold and his motel.

Things all change when a mysterious stranger arrives in town by the name of Milt (Sterling Macer Jr.). He meets with Donnie, wanting his help in taking down Bascum. Donnie doesn’t know, but he is working with Rhoda (Suzan Crowley) to find as much information as they can before going in. The payment for Donnie is to help get his mother to a place where they can actually give her proper treatment. Milt wants revenge for something that happened to him in the past before Bascum took over this town.

Now that’s where I want to leave my recap here. This is really an interesting film. As the synopsis states, it is taking place at first in the mid-40’s, but really in the 50’s. It is interesting that this movie is coming out now as some of the ideas and thoughts for how people should live their life are being looked at currently in our society which makes for some good commentary.

I don’t want to go too political here, but I’ve seen some older generation people wanting us to go back to more of the 50’s style mindset. We see that at least in this town, it has made life miserable. Things are difficult and everyone is just working to survive. Vices are outlawed and we’re seeing what it is to live in a puritanical tyranny. Is prostitute something that should run rampant? No, but I also think that it should be legalized. I also think the aspect with the drugs, it isn’t good. My issue here is that Bascum is the government. He tells the citizens they can’t do these things and punishes them, while he’s having Rhoda over and has things hidden in a wardrobe. He also lets his men do drugs, but since they’re in power, it is okay for them.

Going along with this, we have a bleak world here. These people are fighting for their survival where it feels like a dystopian world while also being grounded in reality. Looking at it from that point of view was really interesting. There is also the constant fear that a bomb could be dropped on them. Bascum uses the siren periodically to force everyone down into their bunkers. Heck, he is even forcing everyone to have bunkers. I just feel that this fear of what his men could do and the constant dread of annihilation give it a nihilistic as well as horror feel for me.

If I do have an issue though, I feel it runs too long. We really build up the idea that Bascum is the main villain. I love all that we get there. What I did have an issue with is the last like 20 minutes just bog everything down for me. Upon seeing how it plays it, it makes a lot of sense. Donnie is a character that has a lot to overcome within himself and with the town around him. I like seeing him hit rock bottom like he does, but I did lose interest.

What was really good here though was the acting. Heyman does a great job at this character. You feel that he’s a good person. You see he means well for everything that he does from raising Bean to helping Mr. Harold. There are his flaws as well that he’s got an anger problem. The opening sequence makes sense to the issues he has developed. I like the growth to what we get at the end. Macer is good for this mysterious character he is. I like Miano and his crew. They are so villainous and I love the corruption of religion that is coming with it. Treska is solid in her role to help break down Donnie while also giving him purpose. The same could be said for Dumont as well. Overall I’d say the acting was good.

Really the last things to go over would be the effects and soundtrack. We don’t get a lot of the former. What we do get is subtle enough. I think the blood we see is good. The cinematography is well done on top of it. There is a filter that makes everything look dirty and bleak. Going along with that, we get a timeless feel like still knowing it is a period piece. That is all well done. Aside from that, I thought the soundtrack worked really well for what they needed and fitting the movie overall.

So now with that said, this is really an interesting movie. I can’t really say it is a horror movie, but I think we get enough elements to consider it being adjunct. I think the time period that it is set is good with the 50’s. The back drop of annihilation from bombs while living in fear with this religious zealot really keeps that feeling of dread for me. The acting really helps to bring this to life and I think the rest of worked well in creating this world. If I did have an issue, it would be that it runs a bit long and I lose interest near the end. Regardless, I still think this is a good movie. I can’t recommend it to everyone, but if this ticks off things you enjoy, definitely give it a viewing then.