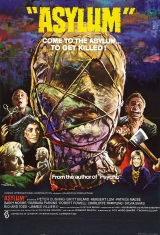 This film begins with foreboding music as a car drives to a mental hospital. We see the name of the doctor who runs it on the sign as B. Starr. A man gets out of his car, played by Robert Powell. He enters. He is brought to the doctor who is in charge currently, played by Patrick Magee. Magee tells him about the place and that the doctor in charge has lost his mind and being held upstairs. Magee is in a wheelchair and states that he lost the ability to walk when he was stabbed in the back by a patient. Powell asks to see Dr. Starr. Magee makes a wager with Powell, if he can go upstairs, speak with the patients and decide who the doctor is, then he can take over the facility if he does so correctly.

He goes upstairs and meets with Geoffrey Bayldon. He is the orderly. He tells Powell that he cannot tell him anything about the patients aside from their names. He takes him to meet with the first patient. This film is an anthology of different stories. We see each one played out with the final one being the story that ties it together.

The first patient he meets is played by Barbara Parkins. She has her back to him as she tells her story. Parkins is seeing a married man, played by Richard Todd. Todd is home waiting for his wife to arrive, she is played by Sylvia Syms. We learn that she is rich and Todd wants to divorce her, but she won’t allow it. He ends up killing her in the basement, cutting her body up and putting it inside of a new freezer. His plans are to run away with Parkins, but his wife was into rituals from Africa. Her body won’t seem to stay dead. Can Parkins and Todd put her to rest and run away together?

The next patient is played by Barry Morse. He was a tailor. He had a shop where he also lived with his wife, played by Ann Firbank. Their landlord, played by John Franklyn-Robbins, comes to tell them that he needs their rent or he will evict them. He gives them a week to come up with the money. Right after a man comes in and wants a suit made for his son, the man played by Peter Cushing. He tells Morse that he is into astrology and gives him the plans of how to make the suit down to the schedule, the material and how to do it. He offers to pay 200 pounds, which will save his shop. There is something very weird about this suit though. Will Morse make it right and will it complete the ritual like Cushing wants?

The patient after this is played by Charlotte Rampling. At first she thought that Powell was a lawyer and is upset when she learns that he is not, but tells her story anyway. From the beginning, she doesn’t think she is sick and feels fine. Her brother brings her home; he is played by James Villiers. She is upset to see that he has hired a nurse to look after her; she is played by Megs Jenkins. We learn that Rampling has a problem with pills. She claims to be cured. She is upset that she is given a sedative and needs to take a nap. After taking care of her, Jenkins receives a call that her mother is ill. Rampling is still awake and her friend Britt Ekland visits. They are coming up with a plan to help her escape. Rampling still is popping pills, which angers Eklan. Will they get away?

The final patient is Herbert Lom. He is a doctor. He has created a bunch of life-like dolls. He believes that he can breathe the essence of life into them.

After seeing all Powell is quite upset. He speaks with Magee about what is going on here. While this is going on, Lom actually brings the doll of himself to life and it is making its way downstairs. Powell believes he knows who Dr. Starr is. Do you know who the doctor is? What is really going on in this asylum? Can they be cured or are they lost causes?

I have to say that I really like films like this. I love the anthology type, especially when they are done correctly and have a story to tie them all together. This film definitely does that. I thought the stories were interesting and are told quickly. The acting is good as well. This film does bend reality a little bit, so keep that in mind when watching this. I also really liked the twist at the end, I didn’t see it coming. The film also did something I like that all the patients’ first names begin with B, to help keep the secret who really is the doctor.

I don’t really have a lot negative things to say about this one. I do think that being how fast the stories move, they are not fleshed out completely to answer why things happen as they are. Not saying that I need everything to be explained to me, as I am a person who likes to figure things out before they are revealed. I just think that the film could have been a bit longer to add more detail. As it stands, you just have to take some of the stories word for what happened or you don’t get why something was done. This doesn’t ruin the film by any stretch, but something I personally do not like and it did hurt my rating.

With that said though, I did enjoy this film. It has four good stories that are brought together by the final tale. The acting was good. The stories move fast and help to prevent the film from dragging. If you are a fan of anthology horror films, I would definitely give this one a viewing. Also if you like 1970s British horror films, then this one is pretty solid from the era. I would recommend giving this one a viewing, even if you are not a big horror fan.