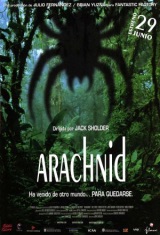 This film begins overlooking the ocean. A waterspout appears and some fish are caught up in it. We then see that an invisible ship is causing this and hovers over top of it. We then see that a stealth plane is flying around the area. It collides with the ship and they both crash onto an island. The man who is flying the plane has ejected in time and he is caught in the trees with his parachute. Once he is on the ground, he sees an alien. It is still some what invisible, but it is immediately attacked by a giant spider. The man is attacked as well.

We then shift to a clinic in Guam. A woman arrives, played by Alex Reid. She asks at the front desk for a doctor. Before she gets there, we see someone who is dying in a room. The doctor is played by José Sancho. His assistant is Neus Asensi. They are trying to go to the island the man who is dying is from to find out what spider bit him and is causing him to die. There are other natives that are living on the island.

We then meet a former Marine who will be on the mission as well; he is played by Chris Potter. Reid is a former Air Force pilot and will fly them to the island. They decide to meet at the airport.

Upon arriving, there is a spider expert that will be coming as well; he is played by Ravil Isyanov. Potter is joined by another former Marine, played by Rocqueford Allen, as well as Luis Lorenzo Crespo. They are bringing some heavy firepower to be safe. They also have some natives from the island to be guides; the two are played by Jesús Cabrero and Robert Vicencio.

During the flight, Potter tries to befriend Reid, but she is not having it. They approach their destination and their plane malfunctions. Reid has to crash the ship on the beach. Sancho and Asensi think she is not as good a pilot as she claims, but Potter points out that the engine is fine and that is was a natural magnetic anomaly that must have caused it. Sancho, Asensi and Reid do not get along from this point on.

Isyanov goes off to find some specimens. He finds one and while he is securing it, something above him drips a thick liquid onto his hat. It begins to smoke. Crespo joins him and shoots into the bushes above his head. Isyanov is not pleased with what he does. As they leave, neither of them notices the giant insect that falls down.

They begin their adventure into the woods. Isyanov finds a giant spider that should not be as big as it is and takes it to study. Crespo is attacked by ticks that burrow into his skin. Reid goes off to relieve herself and when she does, Potter follows. Allen goes after both of them. Reid tells Potter she does not need him looking over her and falls into a hole. Both men get her out, but something took her boot as they do. She falls onto Potter and they are stuck together with what looks like spider webbing. After they detach, Potter retrieves her boot. Something almost takes his hand.

They find the village and it is empty. Isyanov takes a better look at the spider while they are there. He has never seen anything like it and is more advanced than any spider he has ever seen. The ticks end up killing Crespo from the inside. Allen puts him out of his misery and kills the giant ticks when they flee his body. The natives find some blowguns, darts and the poison they use to hunt.

That night their camp is attacked by what looks like a giant scorpion. After they fight it off, losing one of their native guides, it is decided they need to get off the island. The village and its people are dead. Allen and one of the other natives will go to find radio signal for a rescue mission. The rest are going to go to the beach to fix the plane.

This plan fails almost immediately. The native with Allen gets sprayed with acid and is killed. Isyanov finds the giant spider that killed the alien. It puts him inside webbing, it has paralyzed him and he is now fused to it with spider eggs inside of him. The group finds and speaks with him. He tells them to go and they are attacked by it as well.

They run off into the woods, but can they get away? Is there a way to stop this spider that is not of this Earth? Will this spider find a way to make the perfect offspring? Will there be enough survivors to get off the island before it is too late?

I do have to say that coming in, I thought this film was going to be cheesy, but it was not as bad as I thought. The giant spider does look pretty realistic when they are fighting against it and I liked that. I thought the way that most of the mutated creatures on the island acted was pretty real as well. Now being that they are more advanced, they will not completely be normal acting and that needed to be considered. The acting isn’t the greatest and the story isn’t either, but both are enough to keep me at least interested. I think this film does pay some good homage to the late giant monster films of the past.

My biggest issue with this film is the use of CGI and computers. The waterspout in the beginning was horrible, the space ship and the alien were both as well. Anytime they wanted to make a creature move fast, this type of technology was used and it looked fake. This really annoys me and I prefer what was used in the 1950s over what is used in this one. Some decisions by the characters didn’t make sense, some of the dialogue was weak and there is some bad acting as well. Not a lot, but enough where it takes me out of the film and I noticed it.

Now with all that said, this is a decent giant monster film. I will say that the acting and the story are mediocre. The giant creatures actually look good until they are made to move fast and then they are ruined for me. The use of computers in this film looks fake and clearly don’t fit the real locations used. I would say that this film would fall in the middle of the pack in this genre. If you a big fan of these types of films, you might enjoy this one, but if not then I would definitely tell you to avoid this one.