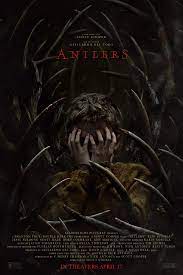 This was a movie that I was excited to see, but it got caught in the pandemic pushback. I was actually going to see this early as I believe Fright Club was going to show this as part of their monthly screening at the Gateway Film Center. That didn’t happen unfortunately as things shut back down. Jaime and I did go to the theater to see this though which was exciting. The synopsis is in an isolated Oregon town, a middle-school teacher and her sheriff brother become embroiled with her enigmatic student, whose dark secrets lead to terrifying encounters with an ancestral creature.

For this movie we start off seeing Aiden Weaver (Sawyer Jones). He’s playing outside of a mine when he hears something that spooks him. He runs back to the truck and his father comes out. His name is Frank (Scott Haze) and asks Aiden if he is okay. The boy confirms it and states he heard something. He wants to go in with his father, but Frank tells him he can’t and goes back in. We see the reason when he goes back in. Frank and his partner are cooking meth. They are clearing out as the mine is to be reopened. They hear something and go to check it out. Whatever it is, it attacks them.

Frank has another son of Lucas (Jeremy T. Thomas). He is in the class of Julia Meadows (Keri Russell). There is something off here and Julia is struggling to control her class. It doesn’t help that the principal, Ellen Booth (Amy Madigan), makes an appearance. Julia is teaching about mythology, fairy tales and folklore. We will get to see that this area looks like it is dying and the children aren’t doing great at paying attention. Julia is dealing with her own demons. She seems to be a recovering alcoholic that was caused by trauma from her father. She lives with her brother of Paul (Jesse Plemons) who is the sheriff. This job takes its toll on him, but it seems like no one else wanted it. There is resentment between the siblings as Paul feels like Julia abandoned him to deal with their father. She also harbors guilt from this.

There is an interesting duality here with Lucas. We see his long walk home from school. There’s an odd scene during this where he kills a skunk. This boy is practically living alone. His father and brother are locked in the attic. Lucas is bringing them food in the form of roadkill or animals he’s been able to kill. Both are infected with something and becoming more animalistic. He isn’t helped either at school when dealing with a bully of Clint Owens (Cody Davis).

Frank’s partner is found by Warren Stokes (Graham Greene), who is the former sheriff. Part of the body he came across while walking in the woods and the other part is in the mine. Paul is at a loss here when the coroner states that an animal didn’t do this. The savagery looks like an animal, but the markings are human. Paul seeks out Warren to see if he knows what is behind this, but what it revealed he can’t believe. The truth might be in Native American folklore and deal with the entity of the wendigo.

That recap there should be enough to flesh out the synopsis a bit more and where I want to start is why I was excited about seeing this movie. I knew coming in that this movie was going to feature the creature of the wendigo. I was introduced to this entity when reading Stephen King’s Pet Sematary. It didn’t stick with me since I read it so long ago. The other would be Wendigo, a movie I believe from Larry Fessenden that my sister rented years ago. The most prominent take on this ‘entity’ would be the movie Ravenous though. None of these have been an excellent representation of the creature being the focus, but parts of the lore are used with the idea of satiable hunger as well as it poisoning the mind.

What I wasn’t necessarily expecting here was a movie that was dealing with trauma on such a deep level. The area that they’re in is impoverished. Jaime leaned over to me during our watch and asked if this was in West Virginia, but we learned that it is Oregon. I understood the confusion as this is a mining town. When that dried up, so did the town. We have Frank along with his partner making meth to ‘survive’. The idea of addiction is tearing the Weaver family apart. We learn that Lucas and Aiden’s mother has passed away. This movie is using a good allegory of Lucas needing to grow up to survive and I’ll be honest, it is heartbreaking. Seeing what he has to do and dealing with bullies at school was powerful to see. It was well done for me. I’ll even say that Thomas, despite being a child, does well as this quiet boy who has a lot going on and is just fighting to survive. His look worked.

To mirror this though, we have Julia. We see that she is a recovering alcoholic in a couple of different scenes that made me physically feel horrible. She looks longingly at liquor bottles. We get glimpses of some of things her father did to her and she is still bothered by them. It isn’t easy to get over. Paul was left with him as Julia fled. There is a tension between them from this, but they still love each other. Julia wants to so badly help Lucas and I commend her for it. I do like having Paul as the other side here though, in a sense telling her you can’t save everyone. I thought this was handled well with Russell having a solid performance and the same for Plemons. He’s such an odd actor to me since I first saw him in Breaking Bad and then I went back and watched Friday Night Lights, the television show. He just fits the roles he takes on so well.

I think I’ll then move over to the acting. I’ve already touched on our three leads so I’ll go to a few of the supporting cast members. Greene is a guy I’m a fan of and I thought he was good here as our ‘expert’. I’m glad they actually casted a Native American in the role as well. Haze is good as Frank. He’s a character that once I figure him out, I despise. We do get some redeeming things as we go though. Rory Cochrane is an actor I’m a fan of so I was glad he was here as a deputy. Aside from that I thought Madigan was fine along with Jones and Davis with the rest of the cast rounding this out for what was needed.

The last things to go into would be the effects, cinematography and the soundtrack. For the former, we get some good practical effects. This is mostly used with the aftereffects of attacks and they were good. It is bordering on being gross without fully crossing that line. We also get CGI, but I will commend the cinematography. They’re great at just giving you a glimpse before cutting away. There are some things at the end we see as well, but I like the concept of it. I had no issues there. Aside for the soundtrack, it didn’t stand out to me, but it did fit for what was needed in building the atmosphere of the scenes.

So then in conclusion here, this is a solid movie to me. I think it is exploring the idea of trauma and how it can affect people. It is interesting that duality with Julia dealing with this idea and then sees something similar happening to Lucas and wanting to prevent it. There is the backdrop of the wendigo here. I personally would have liked this to be the focal a bit more, but it doesn’t ruin what we are getting here. The acting across the board I thought was good. The effects were as well, including the practical and the CGI in that statement. I do think the cinematography helps a lot as well. The soundtrack also fit for what was needed. I would say that overall this is a good movie and would recommend giving it a viewing.