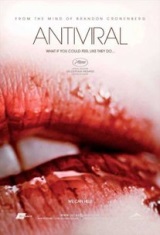 The film follows a worker at the Lucas Clinic; he is played by Caleb Landry Jones. The first scene we get is him sitting outside of a billboard with a thermometer in his mouth. We then get to him pitching some viruses from a beautiful celebrity, played by Sarah Gadon. He convinces the kid to get herpes that she has, even so far as getting it on his lip as if she kissed him.

We learn that the place has some tough security. We also see that Jones is sick with something and takes a sample of it in a disgusting way. We learn that the samples are made to not be contagious. This is done with a machine that uses facial recognition to make it to infect those who pay for it and only them.

We see Jones inject himself with something at work from the samples he asks for. He makes a viable sample that can be reproduced. The machine he has is illegal and he sells it to a ‘bootlegger’ who runs one of the stem cell meat places, he is played by Joe Pingue.

After this, Jones goes back to work and talks to some co-workers when they see their boss is talking to the police. It turns out another co-worker was caught with a machine similar to the one Jones has. The guy the police are looking for is doing the same thing. Their boss tells Jones to go to Gadon’s hotel. She has some new virus that she is willing to sell to them.

He is met at the door by Shelia McCarthy, who is her publicist or something similar to that. She does not recognize him as he is not the usual guy, but allows him in. Jones takes the sample and seals it. He has a way to break into it though and then injects himself with it.

It turns out that Gadon is dying. What she is infected with is killing her and now Jones has it as well. Jones tries to make a copy of it, but the sample ruins his computer. He goes to see Pingue about getting a piece to fix it. He does not seem to be too thrilled that Jones will not share what he has.

The film takes a weird turn as everyone wants a piece of Jones. Pingue takes him to another guy who takes a bunch of blood samples to create more of the virus to sell, this against Jones’ will. He then hears that Gadon has died and he is picked up by two different guys. They take him to place where McCarthy is. We learn that Gadon’s doctor, played by Malcolm McDowell, is trying to keep her alive, but they are using that she is dead to draw out who created this virus. It turns out that the virus is a variation of something she already had and it is weaponized.

Will Jones be able to crack this virus before it kills him? Will he be able to save Gadon as well? He has to do this as the virus takes more of a hold and makes it harder and harder for him to function.

This film is scary to me for a couple reasons. First, I feel like we are already obsessed with celebrities and what they do. I think if we are not careful, this could be how the world is one day and that terrifies me. The next point is that it is scary what these people will do to be close to their favorite celebrities. There are places where you can command video images of them and tell them what to do. They eat the meat of their favorite celebrities which Jones says is cannibalism and he is right, even though the meat is never technically alive.

My problem with this film was that they did not really explain enough of the technology to allow us to fully understand it. Is it imperative to enjoy this one? No it is not and I know that it is made up so it is not completely understood as well. Again, not a huge deal, but that is an issue I had. I was not a huge fan of the ending, but I understood that as well and I respect what director and writer Brandon Cronenberg did.

I would recommend giving this film a viewing if you are into medical related horror films. This one is disgusting and the thought of what people are doing is really creepy as well. Not the best horror film out there, they do not fully explain everything, but the film is pretty solid despite that. Jones does a great job I think and the supporting cast plays their role well. If you can stomach it, I would give it a viewing.