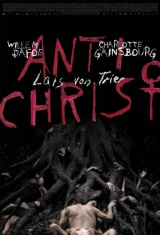 This was a film that I randomly checked out when I was working through Fangoria’s top 300 horror films of all time. I didn’t know much coming into it, but I had seen couple of the writer/director’s other films, Melancholia and Dogville. I knew from those films that this would look amazing and probably have some brutal realism. I’m updating my review after my third viewing, where I saw this in the theater as part of its Horror 101 series. I’ve given it another one as a potential pick for the Summer Challenge Series for the Podcast Under the Stairs.

Synopsis: a grieving couple retreat to their cabin in the woods, hoping to repair their broken hearts and troubled marriage, but nature takes its course and things go from bad to worse.

We start off with the prologue as this film is broken into five parts. We meet our two main characters, He (Willem Dafoe) and his wife, She (Charlotte Gainsbourg). They are making love in the shower and then take it to their bed. We see that they have a son, Nic (Storm Acheche Sahlstrøm). They do not hear that he is awake and do not see him as he climbs up to a windowsill and falls out.

We then shift to them leaving the funeral. She collapses as they do. He visits her in the hospital and we learn that he is a psychologist. He feels that her doctor is an idiot and doesn’t like the idea of her taking the medication she is given. He isn’t supposed to treat his family, but he’s arrogant though and thinks he knows what’s best for her.

He pushes her to get rid of her pills, which she flushes down the toilet. He also pushes to help her through her grief. He wants her to deal with it, not to dull her senses with medication. He does learn that she was writing her thesis and was doing it out in a cabin they own in the woods. While doing this, he learns that she fears the woods and calls the place Eden.

He is awoken in the middle of the night as she is banging her head on the toilet bowl. He stops her and it is then decided that they are going to go to the cabin. While on the way, he does an exercise that shows us important landmarks out to the cabin. He does get her to realize her fears before they get out there.

It doesn’t work at first. She panics on the bridge, needs to rest before they get to the cabin. While she takes a nap, he looks around and finds a deer. The problem though is the deer has a stillborn baby still hanging out from inside her. It runs away.

They finally make it there. We learn more and more about this couple during their stay. He begins to lose it a little bit. The first thing that happens is acorns fall from the tree above the cabin. It sounds like hail and it keeps him awake. The next morning, he wakes up with his window open and his hand is covered what I believe are ticks. He freaks out trying to pull them off.

He continues to question her to learn more about what scares her. It turns out that she fears nature. She is more scared of nature of humans. She thinks that she has overcome her issues, but we see that the isolation might have gotten to her the last time she was here and that it might be happening again.

That is where I’ll leave my recap and I want to say that the more I watch this, the more I think I understand. This one has a quite interesting story behind it. The grief of losing their child is hurting them in different ways. It also is driving a wedge between them as well. She is taking it hard. She blames herself and resents he because she doesn’t think he cares. She thought this in the summer before he passed away that he neglected them. I do believe that it is bothering him, but he is just showing his grief in different ways. She also blames herself.

There is also the aspect that he is arrogant. Despite knowing he shouldn’t be treating his wife, he does it any way. There is hubris here. I think the idea of the treatment he is trying is good. Instead of dulling the pain with drugs or by doing things to mask the pain, he wants her to face what she is dealing with. The issue though becomes that going to Eden is not the best course of action for her. I also should say that I do think medication is good to an extent. It shouldn’t used a crutch though to ignore what they’re going through.

This also has good allegories as well and symbolism. I noticed there are three figurines that bear the name of the chapters of Despair, Grief and Pain. Each of these chapters reflects the stage of depression that she is dealing with as well. There is also the thesis that she is working on that is reflected in things that happen to them. Calling the place that they go to Eden is ironic in that they are like Adam and Eve. There is also talking of the corruption of man with comes back to that story as well. There feels to be a bit of misogyny being explored as she spells genocide with a gy like you would with gynecology. I’m not sure the significance there, but she is painted as the villain.

To the acting of the film which is amazing. There are only three credit cast members. Dafoe was great. As I stated, he comes off as so arrogant that he can solve his wife’s problem. He doesn’t realize that being as close to her as he is that he isn’t seeing the detriment it is doing to her. Gainsbourg is equally amazing. I can see why von Trier likes collaborating with her, as she is in his other films. Her depiction of grief is heartbreaking and seeing her try to cope while being unable to explain her descent into madness. She did a phenomenal job. We also get to see her and Dafoe nude as well if you were curious. Sahlstrøm was fine in the small parts that he was needed.

Next, I’ll cover the effects of the film, which are brutally great. They were done practically and it still makes me cringe even though I know what is coming. There is genitalia mutilation and there is violence on top of that. It is crazy to say though, it makes sense to the story and is done artfully. Von Trier also likes to use vivid colors, matte backgrounds that give the scene a surreal feel as well as using slow motion. It helps to build that feel the film needed. It was interesting to watch this with a commentary on and he is part of it. This movie was made when he was in a deep depression so there is a deeper aspect to all this.

The last thing to go into would be the soundtrack. The use of the music to build suspense as well as give an even creepier feel. There are long stretches that don’t have any type of score with it. It accentuates the feel of the scene when the music is introduced and that is masterfully done.

In conclusion, this isn’t a film I would recommend to everyone. First, if you like arthouse films, then give this a viewing. If you like von Trier’s films, I would say you have to see this one. I have seen his other works and I could tell at once he made it. I do have to admit that I am a fan. He does a great job of mixing the drama, psychology and horror together for this. It has great acting with a good story. The performances drive it. The editing and the music are also good to help the overall feel. I will warn again that there is graphic violence that had me cringing even with multiple watches. If you can’t handle that, I would avoid this. This is just a powerful film dealing with loss and descending into madness.