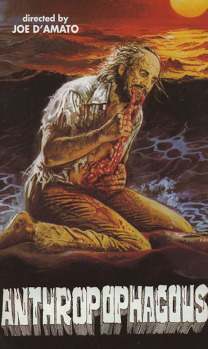 This is a movie that I didn’t know about until getting into podcasts. It is one that that didn’t come up a lot, but I knew quite a bit ahead of coming into it. Part of that is it being on the ‘Video Nasties’ list in the United Kingdom. This went on a list of movies that I would get to and now doing so for the podcast I’m a co-host on, Side Quest. The only other thing I knew was that this featured Tisa Farrow and George Eastman. Queuing up, I realized that Joe D’Amato was the director as well.

Synopsis: a group of friends and a hitchhiker become stranded on a tourist island where they are stalked by a disfigured cannibalistic killer who is prowling the island after killings its residents.

We start this movie with a couple walking through a town. They come to a beach. The woman strips down to her bikini while her boyfriend puts on headphones to relax. She goes into the water and swims out to a boat. She is attacked. Her boyfriend is then murdered by someone with a butcher knife.

It then shifts over to a group on a cable car. There is Maggie (Serena Grandi) who is pregnant. Her boyfriend is Arnold (Bob Larson). With them is Daniel (Mark Bodin) and Carol (Zora Kerova). They’re on the way to meet Carol’s brother, Andy (Saverio Vallone). While on this car, Arnold bumps into Julie (Farrow), causing her to drop her camera. Julie overheard them that they’re going on a tour of the islands and wants to know if she can join them. Daniel and Arnold don’t think there is anything wrong with this idea. Carol doesn’t like it, mostly because she has eyes for Daniel who is intrigued by this new woman. She does get a bad feeling as well.

They meet up with Andy and he agrees to Julie joining the group. Together, they figure out where this island is and set a course for it. Julie reveals that she goes there to spend time with the daughter of a rich family. She was late and missed the boat to get there. It appears that it is a tourist island, but mostly there are just families that live there year-round. The island as self-sufficient as it can get. They set sail. Carol does tarot readings to pass the time and the cards point toward disaster. She doesn’t want them to go to this island and thinks it’s a bad idea to bring Julie with them.

When they arrive there, the island appears deserted. Maggie sprains her ankle getting off the boat and must stay back. I should point out that this island has unpredictable currents from day to day. It could be pushing things out to sea one day and then pulling back in toward shore the next. As our group explores, they find the telegraph machine is broken. This is the only way to communicate off it. It appears that someone did this on purpose. They also can’t find anyone aside from this strange woman. The group soon discovers that their boat is no longer dock. Andy thinks that his assistant did this to prevent damage as a storm rolls in. This means they’re stranded. There is someone or something else on this island and comes for group one by one.

That is where I’ll leave my recap. Where I’ll start is that this is an interesting movie in that it feels like a slasher film. Now Halloween and Black Christmas were both out. This feels like the former one. We have this monstrous person stalking our group. We get a couple kills to kick this movie off before getting to meet our characters and then stranding them on the island. This is a sweet spot for me. I enjoy horror that takes place on a boat as well as ones on an island. It is difficult to get away and that makes it scarier. This isolated village with virtually no one also makes it more eerie. I think this is a great setting.

Where I want to delve more is why I think this is a slasher film. This is the same year as things like Terror Train, Prom Night or Friday the 13th, which was a clone of Halloween. We aren’t getting the giallo idea of a black gloved killer. It has a classic setup. This also doesn’t show us who the killer is, but it also doesn’t hide it and make us guess. We know it can’t be any of our characters as they weren’t on the island yet. There is this mysterious woman, Ruth (Rubina Rey), but it isn’t likely. It was funny to watch this with subtitles on, like I normally do, because it reveals that the killer is Klaus (Eastman), from the opening scenes. I didn’t realize until sitting down to write this that anthropophagus is a word. It means cannibal or flesh-eater. That is a giveaway as well. We don’t get our first glimpse of him until around the middle of the movie, but from that point on, he just picks people off one by one.

There’s not much more to the story, so I’ll shift over to the effects. There is one iconic scene. It wasn’t as bad as I thought it was going to be though. I did want to say that. I can see why that would put this on the ban list, especially when this came out. Seeing it with modern eyes, it is a cool effect and gross. I’ve just seen some things more extreme. Other than that, the effects were done practical and looked good. With more high-definition video, I could see the flaws in it. I’m not going to hold that against though. This goes for it and can get brutal.

I’ll then go over to the acting. Farrow is good as the lead here. I think the voice we hear isn’t hers, but that doesn’t shock me for the era. She is solid in her role here. Vallone is also good along with Grandi, Margaret Mazzantini, Bodin, Larson, Rey and Kerova. None of the actors are great, but they are distinct enough characters for a movie like this. I know who each one is and a bit about them. The best performance though is Eastman. He’s such a big guy and the make-up done on him is creepy. He’s the focal for sure.

The last things to go into would be with the filmmaking. There is the cinematography which I think is good. I like that they set up that this is on an island. They play up them getting stranded when their boat drifts away. It then does well in showing just how isolated our group is. This island is quite big, which makes it even more eerie when there is just our group, the strange woman and the killer on it. I’ve already said how good the effects were. The last thing would be the soundtrack. There is a very synth feel to it. This comes out in 1980, but it still has that feel of the earlier decade for sure. I dug it, but I don’t think everyone will. It adds more to the atmosphere for sure.

In conclusion, this is an infamous Italian movie. This feels more in line with slasher films that were cloning Halloween and it comes out the same year as classics of this subgenre. We have a great and vicious villain that picks off this group that gets stranded on its island. That group is distinct enough. We get some good kills and one that for sure was a reason it landed as a ‘Video Nasty’. I’d also say that the cinematography is solid and the soundtrack helps build the atmosphere. Not a great movie, but one that I enjoyed quite a bit with this first viewing.