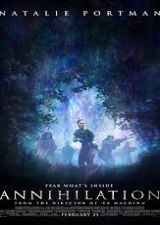 This film starts showing us a lighthouse. Something from space crashed into the base of it and something engulfs it.

We then shift to Natalie Portman. She is being interviewed by Benedict Wong. She recounts the events that happen to her.

She is married to Oscar Isaac. He is in the army and goes on secret missions. He has been missing for almost a year and no one has given her any information about what happened to him. There is another man, David Gyasi, who wants her to move on, but she ignores it.

While she is painting her bedroom, Isaac comes home. She is so happy to see him, but he seems different. She panics as well when he drinks some water and there is blood in it. They are then in an ambulance when they are pulled over. Portman is given a shot of something into the neck.

She wakes up in a clean room. She is visited by Jennifer Jason Leigh. Portman is given minimal information at first. We learn about the mission that her husband went on. There is a Shimmer. It is a field that can be crossed and it has been around for 3 years. Orginally it was just around a lighthouse, but it has now covering the swamp and into the body of water by it. This continues to get bigger, but they really don’t know a lot about it. Anyone that goes in doesn’t come back out. The first was one to be is Isaac and he is different. He is currently in almost complete organ failure.

Portman stays at the base and learns that there is going to be another expedition going into it soon. It is headed up by Leigh. Also going in are Gina Rodriguez, Tuva Novotny and Tessa Thompson. Rodriguez invites Portman to their table and they get to know each other. Portman decides to join with them. The group has their different tasks with the group. Leigh is a psychologist. Rodriguez is a former medic. Portman is a biologist. Thompson is a physicist and they also have an anthropologist.

The go in and the when they wake up the first morning, they are disoriented. They know the communication devices are not working as well as their compass. They continue on and come to a shack. It is there that find that the flowers are growing together on the same vine, but they are different. This is unheard of. Thompson goes inside and then is then pulled back in when she tries to leave. It turns out that it is an alligator that attacks her. It is killed and they investigate it. It has shark-like teeth, which doesn’t make sense as species cannot crossbreed.

They then make it to the former base that was watching over the Shimmer and decide to make camp there. It is here they find a video camera. On it is the unit that Isaac was a part of. There is some disturbing footage of what happens to one of the soldiers he was with. They then find his body and what happened to him.

What is this Shimmer they are inside of? Can they solve the truth of what caused this? What secrets is Portman holding? Can they survive the other creatures they encounter inside of it as well?

This was a film that I was glad I got to see in the theater. It was beautifully shot and was amazing to see on the big screen. There are some a really a great concepts here. I love that some kind of alien influence has crashed on to Earth and it is changing everything within its field. I find this interesting, because it does make for some interesting creatures and reminds me of multiple-dimensions, which is something I’m fascinated about. I did have an issue here. The issue being that it seems that everything that changes is within the Shimmer’s territory. The alligator though has shark teeth and I don’t think there would be sharks in the area for the change to happen. I do love the deeper underlying story as well. We see what we think is a happy life, but the film slowly reveals the truth. It helps make even more sense about the characters. There is also the aspect of them descending into madness trying to survive and figure out what is happening. I also liked the ending, but I do feel like I need see to him to completely understand what happened.

The acting for the film was really good. Portman is the star of the film and is really solid. Seeing the change in her character was great for me, because are presented with something completely different from what we get in the end. Isaac is quite subdued in the film and doesn’t get a lot of screen time. It makes sense in the end though. Leigh is solid as a woman who is quite reserved. The more we learn about the expedition and those on it, it really helps to develop her character. I also really liked Rodriguez, Novotny and Thompson. They all play different roles, but it does well to round out the film in my opinion.

This film uses a lot CGI effects and I didn’t see anything that didn’t look real. There could have been some practical effects, but I’m not too sure on it. A lot of the things that we see in the film not only looks amazing, but looks so real. Some of it was really creepy which helps the feel of the film. The editing of the film was really good as well. It is solid how they transition between what happened before going into the Shimmer, during and the interview after she has survived her time. It helped to build tension and I was engaged in trying to figure out what was happening. The score of the film definitely fit the scenes and to help build the tension as well.

Now with that said, I would recommend this film, especially if you enjoy science fiction horror film. The story was quite interesting to me and delves into some subjects I really enjoy. I also love the deeper underlying story that helps to explain things within the Shimmer as well. There is a plot hole with some of the species that they deal with for me and I’d like to see this film again to fully comprehend the ending. The acting was really good across the board. The film uses a lot of CGI and I didn’t have any issues with it. They looked really good to me. I thought the editing does well to reveal the story as well as build tension. The score of the film also helps to do this and was paired very well. I thought this film was great and definitely worth a viewing if this sounds good.