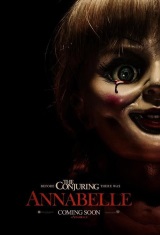 This film is a prequel to The Conjuring. This film begins with the nurses that came in contact with the doll Annabelle. They are telling their story to Ed and Lorraine Warren about their experiences with it. The film then goes to the previous owners and where the possession of the doll began.

We meet the main characters, a married couple played by Annabelle Wallis and Ward Horton. Wallis is pregnant and is she due to have her baby soon. They are good friends with their neighbors, played by Kerry O’Malley and Brian Howe. Wallis is cautious talking about their baby since this other couple had a daughter, but she ran off with some ‘hippies’ and they have not heard from her.

That night we learn that Wallis is a bit oversensitive due to her pregnancy. We also learn that Horton is a medical student and he will be a doctor soon. The stress of the baby and school is getting to him, but he is coping. He does put his foot in his mouth and has to apologize. He does so by showing the gift he had gotten for Wallis. It is a rare doll that she has been looking for, but unable to find.

That night, Wallis is woken up by a scream from next door. We got a quick image of what happened. Their neighbors are being attacked and there was blood that splattered on the wall. Wallis wakes up Horton and they go next door to check on it. Horton goes inside and comes back out to tell Wallis to call an ambulance. She had left her door open. When she makes the call, we see that there is someone inside of her house.

Wallis goes into her bedroom to get her robe and that is when she hears the person in the baby’s room say they like her dolls. A man then appears from the closet. They attack her, stabbing her in the side. Horton shows up and helps fight off the attackers until the police arrive. The man who stabbed Wallis is shot and killed. The woman kills herself, with some blood dropping onto the new doll’s face. The blood runs into its eye and it takes it all in.

We learn that the woman who killed herself was O’Malley and Howe’s daughter. The man was her boyfriend. She had run off with a cult, they are informed of this by a detective played by Eric Ladin. Wallis being cleared medically, just wants to move on from this ordeal. She is put on bed rest though.

Weird things begin to happen in their house. Wallis’ sewing machine runs by itself, the rocking chair that the doll was put into rocks on its own and it all comes to a head when Horton goes out of town. Before he goes, the doll is thrown away. Stove-top popcorn is put on a burner, but turned off. After he has left, the burners all turn on and a fire is started. Wallis tries to flee, but something pulls her back in. Some neighbors show up and save her though.

Wallis ends up having her baby and Horton is excited. Wallis tells him that she doesn’t want to go back to that house. Horton tells her that they do not have to. They move to Pasadena, California.

They still go to the same church, where Tony Amendola is the priest. They move into an apartment building where they meet a woman that runs a bookstore, she is played by Alfre Woodard. She immediately tries to befriend Wallis.

While the couple is unpacking, they find the doll that Horton said he threw away. Wallis decides to keep it, the problem is weird things begin to happen in their new place as well.

Will they realize it is the doll that is allowing these things to happen before it is too late? Can it be stopped? Can anyone help them? Will they be able to get away?

I have to say that the scariest part of this film is the doll itself. It truly has a scary look to it and I am still trying to find out why anyone would want to bring this into their house. This was before it was possessed too. I think the idea of this film is pretty creepy, because a lot of dolls can be kind of a scary thing, especially when you are alone with them. There are some scary parts and some of this comes from the baby being in the middle of the situations. I will give credit to the filmmakers, because when you use animals and babies, it adds another stressful part to horror. I think the overall story isn’t bad, but there isn’t much reveal as Wallis does research about what is going on. I would have liked a little more to be honest.

Now I have to say that I felt this film was boring for the most part. I did feel bad for Wallis and did connect with her, which is good. I didn’t mind Horton, I just felt that this film took too long for things to really start happening. This could be in part to having the first real action happen early on then we didn’t get more for some time. I feel that much of the scary things were subdued and being a prequel to The Conjuring, I wanted more. I did like the back-story of this doll though.

With that said, I didn’t mind this one still. It isn’t a bad demon-possession of an object film. The acting isn’t bad, the story is pretty good and the scariest thing about this film is the concept. I will admit that wanted more being the prequel to a film I really liked. As I have stated, this one isn’t all that bad, but it is boring. This definitely hurt its rating for me though. I would give this a viewing if you like The Conjuring and if this sounds good. If not, I would avoid it.