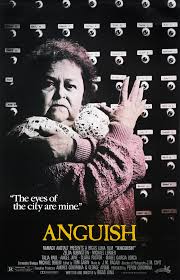 This was a film that I never heard of until I believe it got an updated release a year or so ago. It really did sound intriguing and I decided to make this a featured review for my first normal podcast episode for 2020. My theme was to check out movies I had never seen and I made a very long list with a randomizer and this one was selected. The synopsis here is a controlling mother uses telepathic powers to send her middle-aged son on a killing spree.

We start this with a disclaimer stating that: During this film you are about to see, you will be subject to subliminal messages and mild hypnosis. This will cause you no physical harm or lasting effect, but if for any reason you lose control or feel that your mind is leaving your body – leave the auditorium immediately.’

It then shifts to the home of Mother (Zelda Rubinstein) and John (Michael Lerner). She has an affinity for snails and things that are spiral. Her son keeps birds, which we get a weird scene where one gets out and they have to free it from behind a cupboard to get it back into its cage.

John is an orderly at an eye doctor and we get an odd scene where he puts contacts in a woman’s eyes and this causes her to freak out. It is explained to her that John is extremely myopic and an uncontrolled diabetic that is going blind with an overbearing mother. This doesn’t take the worries away from the woman who storms out. John goes home where his mother then hypnotizes him. He then goes there and murders her along with her husband. We then see that this is actually a movie where Patty (Talia Paul) experiences an anxiety attack and wants to leave while her friend, Linda (Clara Pastor) is engrossed in what she is seeing. Others experience similar things, including a man, Àngel Jové, who is getting more and more agitated.

Much like many of my reviews, this doesn’t have the most complex story, but there’s a lot here going on. The first thing I wanted to cover is the disclaimer at the beginning. I thought that was an interesting thing to start with, as it puts the notice in your head. When the parts of the movie that the hypnotisms are happening, I’m paying more attention and they’re quite engaging as well, so that helps. There’s more to this disclaimer about if someone talks to during the film you don’t know, do not engage with them or give them your ticket, as there is psychology help after if needed. It is a gimmick, but I like the seeds it puts there.

To go over the first part of the movie with John and his mother, I found this to be quite creepy. She is overbearing and knows how to hypnotize him. It is fitting as she uses the spiral record to do so, but she also loves snails with their shell and there’s a moment when she is upset and is carving a similar pattern onto wood. She thinks her son is the greatest surgeon, when he’s nothing more than an orderly. She is also psychically connected to him as he does the things he has to for her. I think it is interesting that the theater John goes to looking for victims are showing the 1920’s version of The Lost World. I’m assuming this is partly due to being public domain, but also being that he’s lost in what he’s doing.

Shifting to the movie that the people in this theater are watching, this is the first movie that we started out seeing. This is really a meta approach here, making it a movie within in a movie. As their watching though, it is inducing anxiety and disorientation to the patrons. Patty at one point goes into the bathroom and his hearing mother’s voice. They’re all there seeing a horror movie called The Mommy. There are other parallels between the two with what is happening in that movie and with those that are in the theater as well.

I’ll move to the pacing here, which had me hooked from the beginning. It doesn’t take too long to get surreal, which is the best way I can describe this. I knew that it was people watching that movie, so I wasn’t shocked. I did feel there was a part as this develops though that I did lose a bit of interest. I thought it was building to something really good and then lost what it wanted to do. What it finally ended up doing at the very end did bring me back in though for sure.

I think that the acting really helps all of this as well. I grew up with Rubinstein in Poltergeist, so it is interesting to see her in this Spanish production as a villain. On top of that, Lerner is an actor I’ve seen before in a more secondary role. Much like with Mother, I found it interesting to see him in this role and I thought it worked. Paul I felt bad for. She really didn’t want to be in this movie any longer and Linda was ignoring her. Seeing her breakdown was pretty powerful. I can’t blame Pastor though. As a cinephile, I don’t like to be bothered if I’m that engrossed. I also think there’s some social commentary here of those watching this film without knowing what is going on around them and how sucked in we get for sure as well as just wanting to watch John as well as Mother do these horrible things to people. That is prevalent with Jové which I also thought did good. The rest of the cast rounded this out as well for what was needed.

As for the effects, I thought they were good. This really focuses on eyes, which I think plays back into my last point about audiences seeing things while not doing anything about it. There’s eye trauma that had me cringe a bit. The movie does cut away though so we really see the beginning and end of these attacks. The eyes that are used looked pretty real though to be honest. I also thought the blood looked good and the rest of the gore that we did get. The cinematography was really good as well.

The last thing to cover is the soundtrack. I thought that it was used very well, especially in the hypnotizing scenes. It really had my anxiety going up, which is effective in my book. I also like when people start to talk to the screen and it is synced up where it seems they’re talking back. This is partially good editing, but I was impressed either way.

Now with that said, I’m glad I finally checked this one out. There’s some really meta things about a film like this that came out over 30 years ago. I really like the commentary here about use as an audience with what we’re seeing and how we don’t notice what is going on around us. This becomes quite scary that people have really shot up theaters so seeing people attacked in one is unnerving. I think that the writer and director, Bigas Luna, strategically used The Lost World. He also constructed a film that got my anxiety going through images and sounds. The acting was really solid across the board and I thought the effects were too. I found this to be a good movie for sure and would recommend giving this one a viewing, especially if you’re more into meta horror.