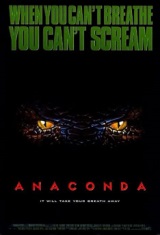 This film was one that I’m pretty sure I caught on the movie channels not too long after it was released. I’ve always been a fan of these creature feature films where animals attack humans. I’ve seen this one a handful of times and will acknowledge, it isn’t great, but its definitely a lot of fun for sure. The synopsis here is a “National Geographic” film crew is taken hostage by an insane hunter, who forces them along on his quest to capture the world’s largest, and deadliest, snake.

It all begins in a boat on the Amazon River. There’s a poacher (Danny Trejo) that’s trying to call for help on a radio, but he cannot raise anyone. We see through the eyes of something that chases him up the radio tower on his boat. While up there, he kills himself with a hand gun.

We then shift to a documentary film crew that is going down the Amazon. They are looking for a Native American tribe that lives in the remote jungle. The director of the film crew is Terri Flores (Jennifer Lopez). She has a past with a doctor of anthropology, Dr. Steven Cale (Eric Stoltz). It seems they’ve lost touch, but this trip might help to rekindle. He’s an expert on tribes that live in the Amazon. Terri’s camera man is Danny Rich (Ice Cube), her sound guy is Gary Dixon (Owen Wilson) and the production manager is Denise Kalberg (Kari Wuhrer). The man on camera and narrator is Warren Westridge (Jonathan Hyde). He is kind of rude, as he tells Denise to take his bags to his room, which she informs him that isn’t her job.

Their barge is captained by Mateo (Vincent Castellanos). Early on we learn the different aspect of the characters. Hyde is uppity and has refined tastes, bringing expensive wine and golf clubs. Wilson and Wuhrer are seeing each other, with both of them acting somewhat childish about it.

As they begin their journey, they find a boat that is tangled some roots. The stranded man is Paul Serone (Jon Voight). He tells them that he is a snake catcher, which Terri calls him out for being a poacher. There is a moment where Serone and Mateo look at each other, which they seem to know who the other is, but nothing is shared. Serone just asks if they can take him to the next village so they can help him free his boat.

It actually turns out that they have might need to work together. Serone reveals that he knows the tribe of Native Americans they are looking for. He offers to help him. He doesn’t reveal what he is actually trying to do though. The barge comes upon a snake totem and Serone suggests they take a path at a ford. Dr. Cale disagrees, stating that his logic is off and that way should be flooded. They take the other route.

Their barge gets stuck in some foliage and Dr. Cale goes into the water to free them. Before he can, he panics and begins to convulse. When he is brought back on the barge, his mouth is opened to reveal a wasp. It is large and poisonous. He can’t breathe due to the stings, but Serone saves his life by giving him a tracheotomy with a knife and a pen casing. It is then decided that they have to go down the ford he said if they want to get to a hospital in time to save Dr. Cale.

The problem is that this other way is blocked by a wall. Serone has dynamite and wants to blow it up. Terri contends that the wall is there for a reason and that they do not know what. She is overruled to save Dr. Cale’s life. We end up in the area where we saw the poacher in the beginning, but there’s something else that is stalking them in the wild.

As I stated above, I’ve seen this film a handful of times. It definitely is a fun film, but it also has its flaws. I do really like the premise though. It isn’t anything new as we’ve been seeing films with this idea for a long time. I like that a documentary film crew is going to the wilds to try to find this tribe. Even more than that, I do believe that we could get giant animals like this in isolated areas. It really is quite believable, especially with how difficult these places can be to reach. I like that there’s no genetic engineering or anything man has done to influence them, this is just nature allowing it to do its thing.

I really like the idea of Serone as well. He plays on the crew’s gullibility. He’s lived in these areas for awhile so he really knows things that they don’t. When Dr. Cale is incapacitated, there is really no one to check him. He only reveals what you need to know as well. Going even farther, there is an interesting dynamic with Westbridge. He is very rude when he first comes aboard the boat. This is flipped when Serone takes over by commanding him around. I really dug that. There is also another interesting one as we see that stress ruins society. Gary sees what Serone is saying and joins in with his logic. If you know me, I’m nihilistic and it doesn’t take much for society to break.

I want to move now to the pacing of the film, which is where I think there are some issues. The film only has a runtime of 69 minutes. It does seem to drag a bit. While watching this, I was thinking and my assessment is that the build up to the film is too slow. We get a lot of action in the later part of the film, but I’m partially checked out by then so it doesn’t have as much of an impact. It is interesting though, because I like the characters. I do think that it ends with a pretty solid flurry though.

Next I want to cover the acting, which for the most part is actually pretty solid. Lopez is really good here. She is looking great and I like her character. She is looking out for her crew and doesn’t care about the film they’re supposed to me making when things take a turn. Cube is also really good. It interesting as he is a watered down version of characters we’ve seen him in the past, but it works for me. Voight is actually really good, which should surprise you. He makes a really good villain and I think part of that is he’s naturally an asshole. The only issue I have is his horrible accent in the film. Stoltz, Hyde, Wilson and Wuhrer as well as the rest of the cast are solid and round out the film for what is needed. I do need to point out that Wuhrer is gorgeous.

This brings me to the effects of the film where they’re hit or miss. I think the practical effects look good. The look of the snake is fine. It does look real and it moves that way as well. The only issue I have is that the head looks awkward at times as it seems closer to the characters, but the film just kind of ignores that. The real issue here is that pretty much all of the CGI doesn’t hold up. I’m sure the first time I saw it; I was all in on it. With some time and reflection, it’s not very good at all. The film is shot well which is something it has going for it.

Now with that said, this film is definitely a fun creature feature. I think that it has a story that isn’t new, but something that is still enjoyable. It does kind of look at society and I really like how Serone plays with this crew. There is a bit of a pacing issue, which doesn’t make sense with how action packed the second half of the film is. I did somewhat check out if I’m honest. I do think that the acting is good for the most part, Voight’s accent is bad. The effects of the film as I said are hit or miss, with the practical being mostly good and the CGI not so much. The soundtrack of the film is fine and does fit for what is needed. I would say don’t come in expecting a great film. This is definitely a film that if you want to have some drinks with friends, it really works there. It is just slightly above average for me though.