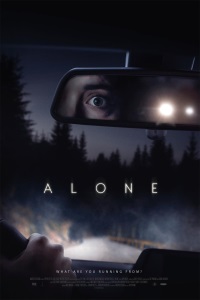 This was a movie that I was looking for a Featured Review over on Journey with a Cinephile: A Horror Movie Podcast and saw this was playing at the Gateway Film Center. I checked up a bit to confirm it was horror and from what I read, it fit the bill for me. Jaime and I decided to give this a viewing that night as well. The synopsis here is a recently widowed traveler is kidnapped by a cold blooded killer, only to escape into the wilderness where she is forced to battle against the elements as her pursuer closes in on her.

To just build on what the synopsis is stating, we’re following Jessica (Jules Willcox). She is packing up her life into a mini-trailer that she can tow with her car. There is the feeling that she is running from something and isn’t until later we learn what that actually is. I did notice early on that she is wearing two rings around her neck, her engagement and wedding ring. Before moving on, it should be established this is taking place in Oregon.

While on the road, she gets behind an SUV that is going slow. She tries to pass, but when she does it speeds up. There is a near-miss with a semi-truck. The driver then decides to tailgate Jessica, honking and flashing lights. This causes her to go more into a panic and she pulls off the side of the road, allowing them to pass.

She calms down and later gets gas. Jessica finally calls her dad, which he is voiced by Shelly Lipkin. She reveals what she is doing and he is shocked. Things get a bit weird though while she is talking to him and she sees the SUV from the highway go by. Speaking that is a bit off the highway in a small town, this spooks her where she struggles to go to sleep that night.

The next morning as she goes to hit the road, a man knocks on her window. He is Marc Menchaca and he is the driver of the SUV. He apologizes for what happened and although Jessica accepts it, she is weirded out by what is happening here. She takes off and continues her journey. Later, she comes to the same SUV blocking most of the road and the guy is in a sling. He asks her to help him push it off to the side of the road and give him a ride to the next gas station. She offers to help in other ways, but he is insistent. She finally drives off, leaving him.

During all of this, Jessica keeps avoiding answering calls from her mother. She finally calls her back when she stops off at a rest area. This is cut short when the SUV pulls up. Jessica panics as the guy walks toward her vehicle. It gets tenser when a van stops, blocking her progress and she panics. He catches up and knocks on her window, stating that she almost hit him when he was going to the bathroom.

It all culminates when she loses control. There’s a flat on the U-Haul trailer and the SUV isn’t far behind. The man gets out and attacks her, where she wakes up in the basement of a cabin. We get to learn more about this guy as Jessica does what we can to escape and survive.

There’s where I want to leave this recap of the movie. This is definitely an interesting film, but I will say, we are getting some tropes that we’ve seen quite a bit of. That’s something that I’m not going to say ruins the movie though. To really get into this, Jessica is dealing with the death of her husband. It appears that she wants to start over so she just packs up and leaves for a fresh start. This is really the worst decision that she makes as it puts her on the path of the man who is after her.

Now I state it that way, because what makes this scary for me is the fact that she does a lot of things right and it still goes wrong. The writer of Mattias Olsson and director John Hyams know the history of abductors like this. I noticed when we first met the man that he only had one arm. He does actually have, but one is in sling, much like what Ted Bundy would do. It is disarming toward people to see them hurt like they are and shows vulnerability. Despite this though, Jessica knows something is off. She doesn’t help him or get out of her car when he stops on her on the highway. She flees immediately when he comes into the rest area. She even calls 911 when a van comes up on her very fast. I just love even though it scares me with the idea that she is making the right decisions, but no matter what she still gets put into a bad situation.

For this movie, we really get two different types of movies meshed together. The first part is a road horror akin to a Duel or Joy Ride. I’d put it closer to the former in how it all starts with the man following her, but we get personality of our villain like in latter. It then changes into a lost in the woods to survive movie. This is why I say it is tropes we’ve seen before, but I do like the conventions that they’re playing with.

Much like you’d get in a slasher film, I like that we have a broken character of Jessica who needs to find her strength. This is something closer to a rape/revenge film, taking out the rape aspect. I do like seeing that. Jaime told me this is something that really scared her and made her uncomfortable, as this is a big fear for her. I do want to give credit to Willcox for her performance. To bring this full circle, she is broken when we meet her and through this survival, she has to find her strength. We know its there as she is moving to take back control of her life.

I really do need to go over Menchaca and Anthony Heald, the other two actors we really get to see. Menchaca I don’t think I’ve seen before. I like the idea that we’re getting real aspects pulled from kidnappers and killers to make this character. It makes him feel clinched, but his performance in the role I think helps. His look is just creepy. Heald is an actor that I normally despise the character he plays, but his performance fits well. Here he is Robert, a hunter that Jessica encounters. I like how things play out and I will admit he frustrates me. I can’t fault him though as the logic is there. Aside from these two, the rest are mostly just hearing their voice and they do well for what was needed.

The last thing for me to go over would be effects of the movie. This is one where we don’t get a lot, but what we do is really good. The bit of blood and the bruising on characters looks realistic. There’s also a scene where a stick gets lodged in a foot. This made me cringe and squirm. If you can do that, you got me for sure. The cinematography though is amazing. They do some really long shots and takes where they play with focus to where you can see only the foreground or background. This is effective in building tension for sure in my opinion. This is probably my favorite aspect is how well it is used.

Now with that said, this movie was one that just popped up on my radar and I’m glad that I got the chance to see it. The concepts aren’t new, but I like that they combine a couple of types of films I enjoy and have two great performances to drive it. The movie is intense and really does a great job at building tension as well. Something I didn’t really go over would be the soundtrack and how that helps to drive it as well. There aren’t a lot in the way of effects, but it doesn’t need them either. What we get are practical and work really well. The cinematography is also amazing in my opinion. For this, I’d rate it as an above average movie, just bordering on good and one that I would definitely revisit to see how it holds up.