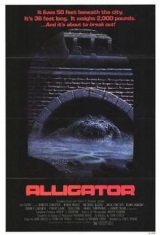 This film begins at a tourist trap in Florida that has alligator wrestling match. The show is coming to an end, when the man gets his foot caught and the alligator knocks him down. It then attacks. The animal doesn’t stop until it is beat by other men that work there. We see that a little girl and her parents watched this happen. She is really interested in the alligators and wants to have her own. She convinces her dad to get her one. Soon after her dad comes out in a fit and flushes it down the toilet. It ends up in the sewer.

We then cut to a pet shop. A man is buying a dog and we learn that his other one was stolen. He is a cop and played by Robert Forster. The man who works at the pet shop is played by Sydney Lassick.

Later Lassick is patrolling as a dog catcher. He finds another dog and it is captured. He takes them to James Ingersoll who works as a lab tech in a pharmaceutical company. He tells him that he needs more puppies.

Forster is called to a water treatment plant, because they found a severed arm. He is then called to look a dog that was found dead. The dog is a rare breed so they call the owner who reported it missing. She said it looks like her dog, but it is too big to the one she had.

Lassick is taking the dogs that have died to get rid of the evidence. He dumps them down in a sewer, but when one of them doesn’t make it into the water; he goes to down to dispose of it. A giant alligator attacks him.

His leg is found in the same place as the arm was. A press conference is called and Forster is forced to talk at it by his boss, Michael V. Gazzo. We learn that Forster was a cop in St. Louis and his partner died. He doesn’t like to be in front of the cameras and a member of the media grills him, this guy is played by Bart Braverman. Forster cuts the press conference short.

He decides that he is going to go into the sewer to find out what is doing it. No one wants to work with him. Finally a street cop agrees to go; he is played by Perry Lang. They investigate the sewer and run into the monster. They try to get away, but Lang is eaten before they can get out.

Forster wakes the next day in the hospital. He asks about Lang to learn that he has died. He also learns that he has been calling out about alligators in the sewer in his sleep. Gazzo doesn’t believe him and Braverman comes in to give him grief about losing another partner. Braverman ends up talking with the nurse and learns what Forster was claiming.

The two cops go to the local expert on reptiles; she is played by Robin Riker. They ask her if it is possible to have a 50 foot alligator living in the sewer and they are told it isn’t possible. Gazzo thinks something else happened and Forster still clings to what he saw.

We also learn that the leader of the corporation that Ingersoll works for is played by Dean Jagger. Ingersoll is doing experiments with hormones to make animals bigger to help with hunger. We learn that they cut out the larynx of the dogs they use, which is what happened to the one dog they found dead. Jagger also has the mayor in his back pocket; the mayor is played by Jack Carter.

Braverman goes down into the sewers and is killed by the alligator. As he is attacked, he snaps pictures of it. His camera is found and everyone finally believes Forster. An operation is set-up to drive the alligator out, with Riker’s help.

They go forward with the plan to drive it out to where a bunch of cops are waiting. It doesn’t come out like they planned though. Instead it breaks open the sidewalk and kills all those that get in its way. Carter doesn’t think the police can handle it and hires a big game hunter to kill it, played by Henry Silva.

Will Silva kill the alligator? Or will Forster and Riker find a way to stop it before it kills too many in the city?

I have to say that this is a pretty good large animal movie. Alligator for the most part is done with a real animal. The scenes of where it attacks people are good as well, even though those are done by a rubber one. I think what this film does best though is to have a lot of the attack scenes happen off screen so it doesn’t look fake. The story is a little farfetched, but not enough to ruin it. The acting is pretty good to go with it, even though that gets a little corny at times.

What I didn’t like about this film are the parts of the story that aren’t realistic. This film is basing itself on the urban legend of people flushing alligators down the toilet and then surviving in the sewers. How it gets big is okay with me. There are a few things that happen in the film too that I don’t think are very realistic and that brings my rating down too. This doesn’t completely ruin the film though in my eyes though.

If you like large monster movies, then I would give this one a viewing. Using a real alligator when they could was definitely something I enjoyed. The acting and the story helps make this more enjoyable as well. Not the best film out there, but one of the better ones from the genre. I would recommend giving this one a viewing if you like films like this.