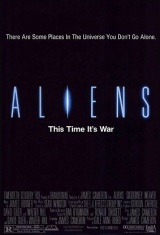 This film is one that I saw before the original. It was in a regular rotation for me and my sister growing up. What is interesting though is that it didn’t start from the beginning on the taped VHS he had. It wasn’t until college that I finally saw this movie all the way through. I’ve since then giving it a few viewings. Most recently it was with Jaime as this appeared on our poster for the top 100 films on the Internet Movie Database. The synopsis here is fifty-seven years after surviving an apocalyptic attack aboard her space vessel by merciless space creatures, Officer Ripley (Sigourney Weaver) awakens from hyper-sleep and tries to warn anyone who will listen about the predators.

As the synopsis states, we start in the escape vessel where Ripley is still in deep sleep. A salvage ship found her and she is taken to a spaceship. It is there that she meets with Burke (Paul Reiser who relays information to her, including that her daughter has passed away. It is taking time for her to readjust as she has nightmares from her encounter.

Part of what she has to do is inform a board about what happened on this planet. They don’t believe her though and part of the reason is that it has been colonized since she went into her hyper-sleep. They found nothing of what she claims to have happened. She loses her license with the company. To make ends meet, she gets a job working on the docks as a loader.

In the extended cut, we shift to this planet where a family travels toward a destination. They are subcontractors and check out a ship that’s crashed. It is the same one from the first movie. The mother freaks out as something has attached itself to her husband’s face and their daughter sees everything. She goes by the nickname of Newt (Carrie Henn).

We cut back to Burke coming to visit Ripley along with Lieutenant Gorman (William Hope). They’ve lost contact with the colony and the company wants her to go with a unit of marines as a consultant. If she does go, they will restore her to her status. She declines at first, but Burke leaves his card. Ripley has another nightmare of aliens and decides to go.

This unit is led by Lt. Gorman. Under his command are Corporal Hicks (Michael Biehn), Private Hudson (Bill Paxton), Sergeant Apone (Al Matthews) and Private Vasquez (Jenette Goldstein) to name a few. They have an android along with them by the name of Bishop (Lance Henriksen). Learning of this upsets Ripley with what happened last time. He tries to put her fears at ease, but it doesn’t work. The marines are tough and ignore Ripley when she tells them about the alien race they will encounter. They think they can take out anything.

The group is filled in on their mission and arrives on the planet. They find it empty. All of the colonists are missing. That is until they find Newt. She’s been hiding out in the ducts and Ripley is able to get to her. They try to figure out what happened here, but she is mostly in a catatonic state. The unit expands to find that all of the colonists are kept in another location. They go there to find out what happened to them and get much more than they bargained for. Ripley thought her previous ordeal was bad, but this is much worse than she could ever imagine.

That will be where I leave my recap. Something I wanted to delve into first would be that growing up, I preferred this sequel over the original. I have come to realize they are two different types of movies. Where the first one is all about suspense, the fear of being trapped while they are stalked by the alien, where this is one is more of an action film where they have to battle to stay alive. There is a lot of action in this one that is good. Jaime even prefers this one for that reason. As a more purist horror fan, I’ve come to love the original more.

As a sequel, this movie does what I want from one. We have Ripley, our lone survivor from the original so we have that familiarity there. I like that instead of a crew that isn’t trained in killing, we get a group of space marines. Seeing the xenomorphs lay waste to them makes it even scarier for me since they’re more capable of handling threats. It is great to see Ripley do more of what she did previously since she is more resourceful. She also knows how dangerous they are compared to her counterparts.

The last part for the story I want to delve into here is that not everyone considers this to be a horror movie. This is more of an action, adventure, sci-fi movie for sure. I would still put this into the horror movie category though, especially with how the aliens came to be and how they tear through our characters as well. It just isn’t the first genre that I would put it into.

That should be enough for the story, so I’ll take this over to the acting then. Weaver is great once again as Ripley. She is this role and we see growth for her. The most recent view that I did was the theatrical cut. I noticed it left out a bit of her back-story which I think is a misstep. It explains why she clings to Newt like she does. Speaking of which, Henn isn’t great. She’s also a kid so I won’t harp too much there. Biehn is solid here. He just works so well in action movies like this. Reiser I think is good as this character that we don’t fully trust in the beginning since he’s a company guy. Where he ends up makes a lot of sense. I like Henriksen as Bishop. Paxton does a lot of overacting here that does wear thin. The role of Hope is an interesting one. From there I’d say Matthews, Mark Rolston, Goldstein and the rest of the soldiers are good.

So then the last things to go into would be the effects, cinematography and the soundtrack. For the former, I like the look of the xenomorphs here. We are expanding on what we got in the previous one which is good. The familiar ones are back and we get more of them. There is also an added bonus during the third act that is interesting. The cinematography is well done, but knowing that James Cameron was behind the camera, it makes sense. Other than that the soundtrack fits the movie for what is needed as well.

In conclusion here, this movie is still solid to me. It isn’t as good as the original, but I like for my sequel to build on what made the previous one good. We are getting more of the xenomorphs, a higher body count and just more interactions in general. I don’t think the acting is as strong, but not by much. The effects are good along with how this is shot and the soundtrack fits for what they needed here. My stance on this one has come down the older I’ve gotten. I still enjoy this one quite a bit and think it is a good movie.