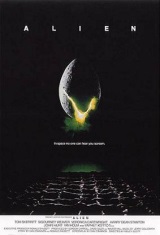 This film is one that I’m not entirely sure when I saw it all the way through for the first time. I regularly watched its sequel, Aliens. I’m thinking it was in college. Since then though, I’ve seen this one more than any other in the series. I’ve seen this at least once in the theater as well and now on 4K with Jaime as it is on the poster of movies we are working through. The synopsis is after a space merchant vessel receives an unknown transmission as a distress call, one of the crew is attacked by a mysterious life form and they soon realize that its life cycle has merely begun.

For this, we begin by getting background information of the story. We are following a spaceship, the Nostromo, which is coming back from a mining mission. They are approaching a planet where a beacon is going off. The crew are awoken early and told by their company to check it out. They are not sure if it is an S.O.S. or not though

The captain is Dallas (Tom Skerritt) and his second in command being Ripley (Sigourney Weaver). They try to land on the desolate planet, but their hull is punctured by jagged rocks in the process. Brett (Harry Dean Stanton) and Parker (Yaphet Kotto) go about trying to fix the damage while Dallas leads a team of Kane (John Hurt) and Lambert (Veronica Cartwright) to check out what is sending the beacon. Ripley monitosr from the ship along with the help of their chief science officer, Ash (Ian Holm).

The planet is desolate and hard to see. They move deeper into the spaceship where they discover a large dead alien. Its chest has been ripped open from the inside. They can tell as the ribs are broken outward. Kane goes deeper to find eggs and an odd fog around them. There is movement inside one. Something emerges and attacks him.

Dallas and Lambert bring him back to the ship and demand to be let in. They need to get Kane to the infirmary before whatever has attached to his face kills him. Ripley reminds them of their protocol about decontamination and that they need to quarantine to ensure it doesn’t infect the rest of the crew. She is under-minded by Ash though and they’re admitted back on to the ship.

Dallas and Ash remove Kane’s spacesuit and assess what has attached to him. They cannot remove it, because if they try it tightens its grip around his neck. The thing has blood that is acid and it feeds nutrients to Kane, keeping him alive in a coma. They try to figure out something to do to save him, but before they can the thing dies and he wakes, starving.

At the meal, everything seems back to normal and everyone is having fun until we learn what happened to the alien that was flying the spaceship. Kane meets the same demise as an alien escapes from inside him through his chest. It is small at first, but as the synopsis states, this is just the beginning.

That is where I’m going to leave my recap and I’m also going to assume that most everyone has seen this movie before. It is definitely an interesting idea. What makes it so great is the world that Ridley Scott, the director, along with Dan O’Bannon and Ronald Shusett come up with. What I mean here is that we have these blue collar workers in space. It almost feels like Dallas is a truck driver with Brett and Parker being mechanics. It feels quite grounded despite being in the future. The characters feel natural to people you would know they are just in space.

Then from that set up, we have the horror elements. I’ve heard many different theories on this movie from it not being horror, to be a haunted house or a slasher film in space. I can definitely see the last two for sure. Once this Xenomorph, as they will be called in later films, gets on board, the tension is constantly raising until it ends. People are being picked off here. We don’t even necessarily need to see things happening, but we do with some quick cuts. It allows our brain to fill in. It is stated in this movie that we have the perfect killing machine which is terrifying.

What I’ve picked up on this time seeing the movie is that there is an interesting social commentary here. There is a company that these people are working for. I don’t recall if their name is stated here, but it is a major corporation regardless. There is a computer by the name of Mother (Helen Horton) that they communicate with. I love there is a secret directive here that only Ash is privy to. Throughout the movie there are little hints that he might not be able to be trusted and it all comes together as the tensions rise.

That should be enough for the story so I’ll go to something that is quite strong here which is the acting. Skerritt is great as our captain here. I like that we feel for a good portion of the movie he could be our hero. He’s faced with some tough decisions for sure. The true star of this is Weaver. It is hard to technically put her in the ‘final girl’ category, but I love how strong of a heroine she is. We just have a strong cast across the board after that. Cartwright, Stanton, Hurt, Holm and Kotto are all great. I will give credit to Bolaji Badejo and Eddie Powell who are the alien in the movie. They both do great as well.

From here let me go to the effects, cinematography and the soundtrack. For the former, they’re on point. The cinematography helps here as well. We have this suit that looks quite real and it is amazing for being 1979. The actors inside definitely help as well. What is also impressive though is how real the spaceships look. They have a lived in feel along with grittiness to them. It doesn’t feel like you’d get with other space movies where things are white and clean. This feels like a spaceship being held together with band-aids and grease. I think the cinematography definitely aids here, especially with making this feel like the future, while also feeling grounded. The soundtrack also helps to build the atmosphere as well.

So then in conclusion here, this is a classic. I might not have grown up with this movie, but I can see why it has withstood the test of time. We have a futuristic movie that feels grounded. This can be seen as a haunted house or a slasher film that is set in space with an alien. The acting is great across the board. The effects are on point for me which are helped by the cinematography. The soundtrack also helps to set the atmosphere that is needed here. This is as close as you can get a perfect film for me. If you’ve never seen this, I could recommend giving it a viewing for sure.