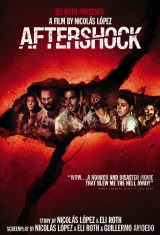 This film takes place in Chile. We see the group that we will follow is out at 4:30 in the morning at a club on a Tuesday. We get a bunch of images of them dancing, drinking and having a good time, until they party themselves out.

We get on the next day at noon while they are taking a tour of a vineyard. The man they call Gringo is really enjoying it, he is played by Eli Roth. The other two are still feeling the effects of the night before. The other two actually grew up together, but could not be more different. One is shorter, chubby and has a rich father, so he just coasts through life; he is played by Nicolás Martinez. The other is a former fat kid and his ex-girlfriend has cheated on him so he is constantly on his phone, worrying about her, he is played by Ariel Levy. At the end of the tour there is kind of funny scene where we see Martinez work his magic to get the tour guide, who is good looking, to come to a club.

Roth then goes off about how we need to have different applications on your phone to meet a woman and he misses the old way of doing it. They go to a big concert and Martinez promises he will meet a lot of women there.

At this club we get introduced to a trio of girls. There are half-sisters who one is beautiful and out of controlled played by Lorenza Izzo, while the other is smarter, more reserved and carrying a secret who is played by Andrea Osvárt. The other one in their group is a Russian beauty played by Natasha Yarovenko.

The two groups converge and they party together. Izzo hits it off with Martinez, while Roth and Yarovenko find common ground in that they both are parents. The funniest is that Levy is on his phone the whole time, complaining about his ex-girlfriend while he is talking to Osvárt.

At the end of the night Martinez invites them to this huge party that is on the next day, but the trio of girls is leaving. Izzo wants to stay and is not ready. Osvárt tells her that they are not changing plans. Izzo then calls her dad and that makes up their minds, they are staying for the next day’s party.

They spend the day together having a blast. That night they go to a crazy party at a club. Izzo gets trashed and angers Osvárt. Martinez sends a picture to Levy’s ex from his phone, making him mad and he has a friend who is an amazing dancer who takes Yarovenko from Roth.

The night cuts short when a devastating earthquake rocks the club. The place falls apart, killing a lot of people inside. The group takes some bumps, but do survive the initial disaster. They hit the streets and try to get to safety. The problem is tsunami sirens go off and continue to sound off periodically. There are other aftershocks that keep reeking havoc on the city. To make matters worse, a prison collapses and frees all of the prisoners.

Along the way on their attempt to flee, more bad things happen. They pick up some others on their way including a fireman played by Marcial Tagle. They also have their run in with a prison gang. Can they survive this disaster and make it out of the city alive?

What I really liked about this film was that the disaster aspect was very realistic. We see the panic; we see the change in people as they try to survive and how it becomes every man for himself. They really show what most people would do and how it brings out your inner character. What I also liked was that no one was safe from being hurt and from being killed. I had in my head who I thought would be the main character and with that said, no one is safe from being taken out. You do not see a lot of films willing to do that and I really enjoyed it.

What I did not like about it is that the characters are really generic. We have the party girl who does not know her limits. We have the single dad who is trying to have a good time because his ex-wife is. There are quite a bit of clinches and I was not bothered when they died. The other problem I had was the effects were a little bit cheesy and some did not seem real. Some of the parts seemed a little convenient as well. Does not ruin the movie for me, but does hold it back.

This is a decent disaster movie where a group of people trying to survive. There are a lot of problems that arise from the prisoners to scared survivors protecting what they have. There are some good death scenes, but some of them seem a little bit convenient and not overly realistic. With that said, this one does not drag on too much. I would give this one a viewing if you are fan of low budget horror or like disaster films. Not the best out there, but not horrible. Also I would say give it a viewing if you like Roth and his films.