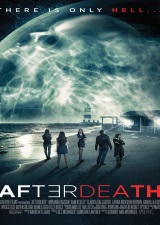 This film starts with someone waking up on a beach. There is a message written in the sand, but it is difficult to make out. Later we learn that it says ‘Even the Good are Damned’. We are seeing it first person so we are not sure who the person is. This person is attacked by a shadow, smoke creature. After it leaves, we see we are following a woman who is played by Miranda Raison. She sees an old beach house and she goes for it. There is a message outside of the door that is written in Latin. We also learn later on that it is something about getting a second chance. Raison hears music coming from the house.

She sneaks inside to see that there is a three-some going on. The male involved is played by Sam Keeley. There is also Elarica Johnson and Lorna Nickson Brown. There is alcohol as well. Raison turns off the music and interrupts. They introduce themselves and then we hear something coming from another room. The three who were having sex seem annoyed. Raison goes into the room to find Daniella Kertesz is trying to slit her wrists and moaning. The problem is that no blood is coming out. Raison stops her and has her join the rest in the other room.

It turns out that they have all died. They were at a club that collapsed killing them all. There is a painting on the wall that shows the club and a bunch of faces that are screaming. The painting is done though were no one is recognizable though. Raison wants to find a way back to being alive, but Johnson pushes back against her stating that she has ruined the fun.

Raison gets on Keeley’s nerves as well. He calls her out on being in management on to how she is acting by taking control. When she first came into the house during the sexual encounter, she saw the smoke creature flying around the room, but no one else did. She knows that has something to do with what is going on.

There is a lighthouse that keeps shining its light periodically on the house and it hurts all those inside. It is immense pain and Keeley tells Raison that is the worst part of being there. Kertesz disappears and we learn this is something that seems to happen periodically as well.

It turns out that different parts of the house are something different to each person there. The living room, kitchen and furniture are the same in Keeley’s college house. One bedroom is the same as Brown’s parent’s, the bathroom that of Johnson, the other bedroom that of Kertesz when she was growing up and the exterior is that of a house that Raison’s mother owned when she was a child. There is also a face on the window that her mother drew to tell her that she was pregnant back then as well.

Raison then convinces Kertesz and Brown to leave the house to make it to the lighthouse with her. Keeley and Johnson decline to go. During their walk, Kertesz disappears and no matter how far they walk, they never get closer. They get to a certain point and they are turned around back to the house. While they are gone, Keeley and Johnson decide to have sex again, but are attacked by the shadow creature.

They know they cannot escape that way and decide since they are dead to admit their sins to see if they can find a way to use that to return to life. Raison believes that Kertesz keeps coming back, because she is tittering between life and death. This seems to be true when she brings back a bracelet her father gives her.

Telling their sins doesn’t end well when Keeley gets mad when Raison calls him out on a rape case he was accused of. He storms out of the house and is raped by the shadow creature. There is also another painting in the house of the exterior with a bubble around it. The painting also features several more with the bubble getting smaller and smaller. Raison also realizes that the shadow creature attacks when they commit sins.

Can they figure out how to escape this place and return to life? What sins are they committing to force them here? What secret is Raison holding? Can the afterlife be beaten?

I want to lead off stating that this film has a great concept. This film is great that these people are stuck together with vices around them, but they shouldn’t use them as that is why they are condemned to hell. It actually is terrifying to think of some of things they are doing damn them from going to heaven. This is a tough film to do where there really are only two locations they house, indoors and outdoors. This is definitely a character driven film, but I think the acting was good enough to pull it off. I also really liked that no one wanted to admit what their sins were as it clearly makes them look bad. I also like that this has an element from the Saw films that being patient would allow them a place in heaven.

Unfortunately though this film could have been better and it was not executed as well as it should have. What is a tad frustrating to me is that I’m not sure what could have made it better. I am a big story guy, so knowing that helps me to enjoy a film more. I wanted to know more about really where they were and about the shadow creature that comes when they sin. I wasn’t a huge fan of the shadow creature being captured and then telling them what it knows. It comes off a bit convenient and cheesy. I also get that is what I wanted to know more and that was the device they chose to reveal it.

Now with that said, I liked this film despite the mediocre rating I gave it. I wanted to rate it higher because it does have a great concept and the acting with it was good as well. There was just too much left unexplained for me and it did get a little bit boring at times as well. It does give a different perspective on the afterlife and religious beliefs on it. I would say to give this a chance if it sounds interesting, but I personally feel that the film took a great concept and missed the mark unfortunately.