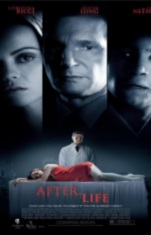 This film begins with Liam Neeson as he prepares a corpse for a funeral. He speaks to the dead.

We then shift to a couple as they are making love, the woman is Christina Ricci and the man is Justin Long. Long stops, because Ricci doesn’t seem to be enjoying herself. They go about getting ready for work.

Long is some sort of businessman while Ricci is a school teacher. She comes into her classroom and finds that one of her students is being bullied by two other kids, the kid being bullied is played by Chandler Canterbury. He thinks one of the chickens in the classroom is dead, but Ricci reassures him that the chicken is just scared.

Ricci is unhappy in her life and she dyes her hair red. She then goes to a funeral at Neeson’s funeral home. Afterwards, she meets Long for dinner where he is planning on proposing to her. Long goes about his spiel, but Ricci thinks he is breaking up with her. She storms out of the restaurant. We see her as she drives, it is raining hard, she tries to find her cell phone in her purse and there is a van behind her that is driving erratic. There is a bright light and she screams.

She wakes up on a table in the funeral home of Neeson. She asks why she is there and he tells her she is dead. She doesn’t think this is possible, because she is talking to him and moving around. Neeson tells her that she is dead and after some arguing, he gives her an injection.

Long tries to find Ricci the next morning since she didn’t stay over. He calls her and gets no response. He goes to her school and she isn’t there. He finally goes to her mother’s house where he learns that she is dead. Ricci’s mother is played by Celia Weston. She resents Long and believes he took Ricci from her.

Weston comes to the funeral home and asks to see her daughter. She is stoic, but clearly she is shaken by what has happened. Ricci doesn’t move or say anything while she is there.

Ricci still believes that she is alive. She argues with Neeson that she can’t be dead. He continues to tell her she is. He shows her a copy of her death certificate, but she still is convinced that she is alive. They continuously argue this. She tries to escape. She tears up the room she is kept in. She also has nightmares of the other dead bodies that are in the room. She even goes through a door to see a younger version of her, telling her she didn’t live life.

Neeson has the ability to see and talk to the dead. He tries to convince them that their time is up and make peace with their fate. He also doesn’t believe that people live. He thinks they just exist and have been dead for quite awhile. Ricci does escape the room and tries to leave the funeral home, but she ends up seeing herself in the mirror, looking like a corpse. That helps her make peace.

When Long cleans out her desk and tries to give up, Canterbury tells him that she is still alive. He claims to have seen her through the window. As it turns out though, he has the same gift as Neeson. Long is upset by what he hears and hits the kid, but when he realizes what the kid claims could be true, he is determined to prove it.

Ricci isn’t quite so sure right before her funeral when she looks into a mirror and it fogs up with her breath.

Is Ricci dead? Are all the people that come to Neeson’s funeral home alive and is he killing them or does he really have this gift? Is Neeson killing those that aren’t living life or is he really helping them find peace? Is Canterbury like Neeson?

I really like the concept of this one, because you don’t know if Ricci is dead or if Neeson keeping her in a suspended state when people are around. We never see her get embalmed and he always gives her an injection when someone is coming to the room, including when she goes out to her funeral. It is open to your interpretation and Neeson could be teaching Canterbury to do what he is doing. Along with the good acting of Ricci, Neeson and Long, the story helps this one flow very well.

The only issue I had with this one was that the scenes seem a little forced. Neeson comes into the room with Ricci to work on her, but every time he leaves without doing anything, because they are arguing. I know he can’t, because it will mess up with her moving. It does re-enforce that she is alive and he needs her to come to terms to make it easier to get her ready.

I would recommend this film if you want a scary concept of preparing someone to be buried alive by convincing them they are dead. Or it could be considered a film where the person who gets the dead ready for their funeral mentally ready to move on. Either way, the acting moves the story along very well. The film is open for interpretation, so if you are into drawing your own conclusions, I would recommend giving this one a viewing.