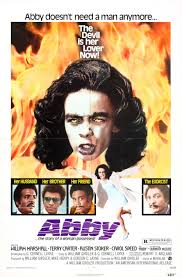 This was a film that I heard about through podcasts and it has an interesting back-story. It appears that it was pulled from being shown really as is feels like a blaxploitation version of The Exorcist. I didn’t even realize after coming in to write this that it was directed by William Girdler. I decided to watch this for my podcast as I wanted to celebrate Black History Month and the sub-genre this falls into, I gave it a watch. The synopsis is a marriage counselor who becomes possessed by the demon of sexuality when her father-in-law frees it while on an expedition in Africa. He returns home, along with his son and a policeman, to perform an African exorcism on her.

We start this movie off with Bishop Garnet Williams (William Marshall) on a send off party with his students. I will admit, this is a ham-fisted way to introduce Bishop Williams to us. He is a doctor of theology, amongst other things, and going to Africa for an archeological dig. This takes him to Nigeria where he finds something that is in honor of Eshu, the Nigerian god of sexuality. It is opened and something flees from it. We see it as smoke and wind, as well as flashes of a spooky face.

Back in the United States, a family is moving into a new home. We have Rev. Emmett Williams (Terry Carter). He’s the son of Bishop Williams. There does seem to be a kind of strained relationship that is introduced to us. Rev. Williams is married to Abby (Carol Speed). Helping them to move in is her mother Miranda Potter (Juanita Moore) and her brother who is a detective, Cass Potter (Austin Stoker).

That night Emmett is woken up by something in the attic and there’s some loud sounds as things are falling. He wakes up Abby and she scolds him for doing so. The two of them make love, but the next morning, something seems to be stalking her in the shower. We then get scenes where she has a violent coughing episode in church while her husband is giving his sermon. She also has outbursts.

Abby is taken to the doctor for tests, but they can’t find anything wrong. Emmett reaches out to his father who is still in Africa. At first, Garnet really doesn’t see anything as too serious, but soon realizes he might be the cause of what is going on. Abby becomes violent and her family starts to fear the worst.

I guess I really should cover the elephant in the room for this film. As I said, it really is a knock-off of The Exorcist. It is the reason I’m assuming it hasn’t had a proper release as the courts ruled this was the case. It is really hard to not see the similarities with just some twists on it. We have Garnet who goes over to Africa and unleashes this entity. It takes over someone and makes them act out of character. There’s the sequence where they get tested, being told there’s nothing wrong and that mental illness could be the next step. We also see the perversion of religion. There are flashes of the demon’s face which were spliced in at different times. The exorcism scene is kind of similar as well, but again all of these things are done with a blaxploitation twist. It is interesting though that they were done the same year, so the only explanation for if things were taken would be that Girdler and Layne had read the novel and this came out later in the year, so possible the movie itself.

Despite the similarities, I like the changes this film does. Not making it necessarily better, but we’re getting to see some different aspects for sure. The first thing is that Abby is an adult woman. She is married and she is a beacon in the church. She just got her license to be a marriage counselor, but even more than that, she volunteers a lot of time there and is a God-fearing woman. On top of that, she’s married to Emmett who is the local minister. I really dig that this movie is having the demon wanting to get revenge on Garnet, who released it as well as someone who could also possible defeat it as well. Instead of having the loss of innocence of a child, we have the corruption of a woman who is living within the rules of her religion. The demon is perverting that.

Going along with this idea of religion, being that it is showing the culture of African-Americans and I use that term here as Garnet is studying over in Africa. I like that it is combining their past of this African deity of mischief and sexuality with that the more modern culture of black people and their newer Christian beliefs. This is embodied a lot by Garnet as well. During the exorcism scene, he is wearing his Catholic priest garb, but then also dons more traditional African priest clothing over top of it. I took this as marrying the two together in order to save Abby.

Taking this to the pacing, I thought it was well done there as well. It benefits from only running 87 minutes, but I also think that they remove filler as well. There’s a deep story here where Garnet is proud of his son, but there seems to be some animosity toward his father. It doesn’t necessarily delve too much, but I would assume it is because his father is so wrapped up in his work that he’s semi-neglected him. By coupling that strained relationship with the perversion of Abby and the two needing to come together, that also including black culture from the past to the present as well. I think we see the progression of what happens to Abby and where things end up. The ending was solid for what we were building to.

Something that wasn’t great across the board though was the acting. I’m not going to come down too harsh for the caliber of acting and the budget they were working with. That’s not to say we don’t have good acting. I’m a big fan of Marshall and I just love his presence on the screen. It is great to see him go from Blacula to Garnet here and I just believe him to be this prestigious and respectful man. Carter is also good and I like the growth of his character. Speed is also really good as well. I love seeing her normal and then what happens to her through the possession. She as a few moments of overacting though that stood out to me. Stoker is fine in support. The real issues come from the other supporting actors. They just feel amateurish and I think in part of that is how things are written to be introduce things. Also props to Bob Holt who voices the demon as well, it was quite creepy to be honest.

As for the effects of the movie, there doesn’t seem to be a lot actually. I like the make-up that was done for the possessed Abby. They lightened her skin and put in contacts which made her look pretty creepy. We get the use of smoke and some other random effects. They don’t really stand out, but for a movie like this, they don’t really need to. It is effective for is being used. I also thought the cinematography was well done also and I had no complaints.

Now with that said, this movie was better than I was expecting. I knew that this is considered the blaxploitation version of The Exorcist. I can see that here, but can also see that this is pretty different in what they’re working with as well. It has some interesting concepts that are explored and they actually ticks off some of my boxes for things I really like to see play out. The acting from the stars is good, but there are some slight issues with supporting players. Not a lot in the way of effects. It doesn’t necessarily need them though. I never got bored and thought it built the story in an interesting way. The soundtrack was fine for what was needed and if I’m going to comment on anything, it would be the creepiness of the demon’s voice by Holt. I’d say this is above average. It has some minor flaws, but overall an interesting piece of cinema.