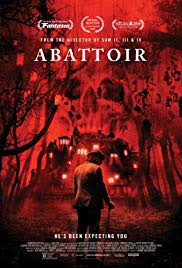 This film was one that I had been intrigued about after hearing podcasts talking about it. The concept was quite interesting so I finally decided to give it a viewing. The official synopsis is an investigative reporter teams up with a police officer to solve the mystery of why a seemingly good man murdered her sister’s family.

We kick off with getting a little bit of a back-story, but it is given us to in a way that is hard to follow. We see a man from behind who has long hair and we can hear a bunch of jumbled up talking. It then shifts to a reporter talking to her boss. She is Julia Talben (Jessica Lowndes) and she is currently is a real estate writer for the newspaper. She is shot down by her boss for the article she tried to write and pretty much told to stick to what she does. She walks out with a police officer, Decland Grady (Joe Anderson). I think they are an item, but being where she works, she has to keep it quiet.

She goes to her sister’s house where we learn that they were adopted. They are doing what they can to figure out where they are from and who their birth mother is. It is during this that we see a man sneak into the house. Julia goes up and visits with her nephew, who has had quite a bit of surgeries and it is expensive. She gets him a skateboard and promises to always protect him. That night though, the whole family is murdered and the killer calls Julia, while she’s with Decland.

After the funeral, Julia really wants to solve what happened to her family. She wants Decland to get her in to interview the murderer, but he doesn’t think it’s a good idea and he’s not sure he could regardless. She freaks out when she gets back to the house to see it has been sold, which happened way too quickly. The two of them go inside and hear something upstairs. They go to find that the room where the murders happened is missing.

She visits the man that handled the sale of the house and gets the name Jebediah Crone. She looks into similar things that have happened and there is a pattern. A number of murders and deaths are happening. The places that they occur are bought, the rooms are taken and then the houses resold at a loss. This pushes her to find even more information about a town named New English. It might be the answers she is looking for in regards to her own past as well as whom this Jebediah is.

This film definitely has an interesting concept in that murder/suicides happen in different places. There is something that is connecting them all, which I also found interesting. That aspect of the film really sucked me in. When you first hear that rooms where the murders happened, I was intrigued how that was going to play out. Actually seeing it though was believable. The reason that they are taken was solid. It is inever more intriuging that an abattoir is actually another name of a slaughterhouse.

That actually brings me to the character of Jebediah. He is played by Dayton Callie, who I know from Sons of Anarchy. I really liked the role that he played for the film and his character’s interesting back-story. I won’t really get into it, as it goes into spoiler territory, which I try to avoid if at all possible. All I will say he is a religious zealot, but there is a twist on it that I really liked.

This film also has this weird feeling where I wasn’t sure of the time period. The opening sequence of Jebediah and then meeting Julia makes it feel like this film was from the 1950’s. A lot of this came from the building that she works in, how she is dressed and even at first Decland. Once she gets to her sister’s house, I could tell that is was taking place in modern times. I thought this was an interesting way to go with this. When she actually goes to New English, there were aspects there that seemed like it was stuck in the past. I’m actually fine with that happening, as that makes the setting much creepier. Having it be like that in other parts though took me out of the film.

Next I want to cover is the pacing of the film. I felt there were some issues here. I found myself bored at times. Part of this is that it really takes took long after the initial murder for anything to happen. I really like when you get things that help move along the story and give the film some kind of excitement. Even at the major reveal at the film, I really just couldn’t get back into the film. I will give that I loved the bleakness of the ending, it was just a too little, too late.

As for the acting of the film, Lowndes I thought was solid as the main actress. The film did a great job at introducing her as someone who is tenacious and we get that throughout. This is actually her downfall, which I like as well. It is something I can connect with her on. She is also quite attractive. Anderson is fine as the cop in this film. He does go a bit over the top, but it doesn’t hurt anything. I was confused as to what his real relationship was with Julia though, as it was wasn’t fully fleshed out. Callie like I said earlier was great in his role. Lin Shaye is in this film as Allie. I was glad when I saw her name appear and I thought she was fine in the film. The rest of the cast round out for what was needed, especially John McConnell who plays the sheriff in New English. The rest of the townspeople there definitely add to the creepiness.

Effects for the film were also good in my opinion. We don’t get a lot until later in the film. At the reveal is a structure that is crazy. I thought it looked quite real and was impressed by that. There are also things inside of it that are done with CGI. I thought it looked fine. The only thing practical seemed to be some gunshot wounds, which looked good. I would definitely say that the effects were one of the stronger aspects of the film.

Now with that said, this film was slightly disappointing to me. The concept they used I thought was good, from the rooms being taken and what happened to Jebediah. I liked the concept of Julia’s character as nothing will stop her as she tries to find out the truth. The problem for me really came with the pacing of the film. It just kind of loses its way and I lost interest. There was also an aspect of what time period the film is taking place that was a bit jarring early on. The acting and the effects for the film were good in my opinion though. The score of the film really didn’t stand out or hurt the film as well. I would recommend this film only if you are a genre fan, as I found this to be slightly above average.