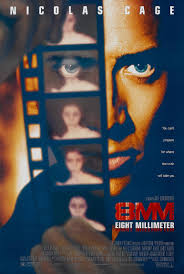 This was a film that I remember when it came out. I would have been 12 years old and I believe that my father saw this. He didn’t keep a lot away from my sister and me, but I do know that this one he didn’t want us to see. It took me quite awhile to finally check this out and thanks to the Podcast Under the Stairs, I finally did. The first watch was when I was on the People’s Council. I’ve now given it a second watch as another potential pick for the show.

Synopsis: a private investigator is hired to discover if a “snuff film” is authentic or not.

We start with seeing Tom Welles (Nicolas Cage) in Miami. We gets photographs of him as he goes to a local place and then we see him at another airport, in a less luxurious place. Through this we learn that he is a private investigator hired by a senator to see what her son-in-law was doing. He is known to be good as well as discrete.

At home, he’s married to Amy (Catherine) and they have a daughter together. Tom was supposed to have given up smoking, but it seems that when he works, he reverts to chain smoking and this bothers his wife. We also see that he lies to her about it.

A call comes in and it leads Tom to meet Daniel Longdale (Anthony Heald). He’s the attorney for a powerful family where the husband recently passed away. His wife is Mrs. Christian (Myra Carter). They opened the late husband’s safe where they found normal documents and an 8mm film. Tom watches it and what he sees bothers him. It is a snuff film. Mrs. Christian can’t live with the thought that it could be real and they can’t go to the police with the scandal that would ensue. She hires Tom to see if he can figure out if it is real or not.

Tom going away puts a strain on his marriage as he just got back. She knows this is his job and he convinces her that working for these powerful clients will pay off in the long run. Until then, he must go. There’s not a lot to go on with the film he’s given, but the more he watches it, the more clues he finds. This leads him down a dark path of S&M, pornography and what happened to Mary Ann Mathews (Jenny Powell).

Upon watching this, I can see why my father didn’t want to me to watch this at the age I was when it came out. The film isn’t overly graphic. There are some things here that back then I don’t think I would have understood and the film has a lot of nuisances where it took me until being an adult to fully comprehend. To be honest, he probably thought I’d be bored as well.

With that out of the way, I like the mystery of this film. I think my favorite aspect is that there are moments early in that Tom tries to get out of this job, but Mrs. Christian needs this peace of mind so she asks him to continue. Once he puts a name to the face of the possible victim he can’t let go and I think this works well. It makes to set up Tom’s back-story, because in doing so we see what he is working for. There is part of that where he’s projecting his daughter on to this young woman who is missing. There’s no one advocating for her aside from her mother, Janet (Amy Morton), who is a broken woman in her own right. There’s an aspect here that the deeper he investigates, the more he loses his humanity. It’s almost like to solve this; he must become an animal like the animals that did it.

I also like how quickly Tom can think on his feet. I’m sure that he is rehearsing a lot of this before he meets with people, but he thinks fast and lies without even thinking. I do feel that is a bit problematic to his good character here though. I like my hero to be a little bad, as it is more akin to humanity. The lies that he tells to get information makes it interesting as a lot of these people don’t really follow-up with what he’s claiming. One of the times is when a nurse violates HIPPA. He said he was a cop and I can believe that. It is over the phone as well.

Something else with the story I wanted to explore is the elites. We don’t get to meet Mr. Christian when he is alive, but there is his wife when she hires Tom. She has almost unlimited funds to have him investigate this film. I like that he doesn’t take advantage of her. He is trying to get in with them for more work down the line. We know from the moment we see parts of the movie that it is real. It is said that someone like Mr. Christian would pay for this. They don’t play by the same rules that we do. This also feels like the dark web before the internet took off. You had to know someone to obtain movies like this. Or the case of this one, get it made. Conspiracy theories like this run even more rampant now, especially for those in the government.

If there’s anything that I had an issue with would be the length. It clocks in just over 2 hours. I should set up first, it never gets boring. It builds tension and I could feel it in my chest with every new piece of evidence he discovers. I just think that there is a lull early on when he has very little to go on. Once he gets to Mary Ann’s house, from there he just keeps finding things. I love the climax and the decisions that are made. There’s an abominable human nicknamed Machine (Chris Bauer) and I absolutely loved his responses to Tom’s questions. I wanted a bit more from the ending, but it is fine for what he dealt with in the film. From the changes to the character, I wanted it to be bleaker.

That moves me next to the acting, which I thought was good. There’s quite a cast here and I didn’t realize that. Cage is good. There was a couple times where we got him over the top. It is only early on that I thought it didn’t fit. I like how he plays it and it worked for me. There is an interesting transformation for sure. Joaquin Phoenix appears as porn shop worker, Max California. I thought he was great. It is interesting that he shows what happens to people in life when their dreams fail and I saw part of myself there. He is smarter than what he’s doing, but he’s stuck. We also have James Gandolfini as Eddie Poole and Peter Stormare as Dino Velvet. Both are sleazy guys in the industry. They both were solid in their roles. Heald plays that arrogant role so well and he does it here. I liked Keener as she brings humanity to Tom as he is losing his. Bauer, Morton and Powell were all solid as well, rounding out the film for what was needed.

Next would be the effects, which surprising there’s not a whole lot. I thought the look of the 8mm movie was good. We do get blood, which I thought was fine. There’s not a lot of it. The rest of it I would say was practical. I’m always on board with that so no issues in this aspect. I do think the cinematography is solid. It makes sense since Joel Schumacher was the director.

The last thing to cover would be the soundtrack. I thought it fit for what they needed. We do get a lot of instrumental industrial music which does fit the motif of the bondage lifestyle we’re seeing. The rest of the score fit the scenes and late in the film it helped to amp up the tension as well.

In conclusion, this is an interesting film that I’m glad I can knock off my list of ones I hadn’t seen. It is interesting having Tom as he tries to advocate for this missing girl while he loses his own humanity to solve what happened to her. It raises the tension with each new clue he finds and discovers the dark truth of it all. I did want a bit more from the ending, but it doesn’t ruin it. Acting helped to bring the characters to life, as there’s quite a solid cast here. There’s not a lot in the way of effects, but what we got was practical and looked good. The soundtrack fit for what was needed, especially ramping up the tension as it goes. Despite its dark subject matter, I think this is a solid mystery for fans and non-fans of the genre alike. This was a good film in my opinion.