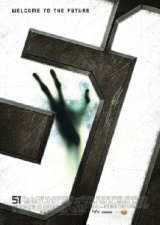 In this film we begin with a news report about Area 51 and that it will be opened for some people from the press to get a tour. We then shift to the base and the man who will be taking them on the tour is played by Bruce Boxleitner. We also meet two soldiers with very different backgrounds, the female being played by Rachel Miner and the male by Jason London.

From the press, one is a man who is on TV for a major network. He is known to fall into the trap of not reporting news that makes a difference, but what he is told to do, he is being played by John Shea. The other is a blogger who is known to get in and find the truth; she is played by Vanessa Branch.

While they’re on the tour, Boxleitner is showing things that aren’t relevant to try and prove there is nothing going on inside the base to make the public see that they were wrong. The film shows us one of the aliens known as Patient Zero. It looks weird, but we learn that is has the ability to change into any person that touches it.

Patient Zero looks calm, but attempts an escape, which with its abilities is quite easy. While it does this, it seems to be searching for something and in the process releasing 2 other aliens that are less intelligent, but much more aggressive.

Can the people and soldiers survive while ensuring the aliens do not escape? There is another alien inside the base that can help, but the truth behind Area 51 might hinder that.

This is your typical Syfy channel film. The acting isn’t good from actors and actresses I know are pretty decent at what they do. The aliens aren’t all that scary looking and I’m a firm believer in hiding the monster is sometimes better than showing it. The action sequences aren’t that great either. There are countless times the soldiers on a top secret base shoot each other. I understand that a couple times in this film make sense, but it got to be a little much.

With that said, this film did have promise with a decent premise, but it fell flat on its face for me. I feel the problem was bad writing and the need for horror films to show the monster instead of trying to build suspense without it.

I wouldn’t recommend viewing this film. I only did because it is part of the 8 Films to Die For and I have vowed to watch all the films in these series. If you are into that, I would give a view to say you did, if not I would avoid this one, it isn’t very good.