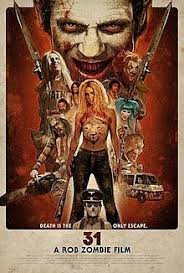 This was a film that I remember hearing about, but didn’t get around to seeing it when it dropped. I was turned off a bit when I heard a lot of negativity toward it. I still added it to my list of films to check out as I like to decide for myself. I thought the title was interesting and especially when it came out, in that this takes place on Halloween. The synopsis is five carnvial workers are kidnapped and held hostage in an abandoned, hellish compound where they are forced to participate in a violent game, the goal of which is to survive twelve hours against a sadistic gang.

We start this off with a monolgue from Doom-Head (Richard Brake). His face is done up with white paint and there’s blood around his nose and mouth. We finally see that he’s talking to Pastor Victor (Daniel Roebuck). He pleads to be let go, but is murdered instead.

It then shifts to a group of carnival workers. We know that it is Halloween in 1976 and they’re traveling through the desert. They’re led by Venus Virgo (Meg Foster) and with her is Charly (Sheri Moon Zombie), Roscoe Pepper (Jeff Daniel Phillips), Panda Thomas (Lawrence-Hilton Jacobs), Levon Wally (Kevin Jackson) along with two other women and their driver. They stop off to get gas at Lucky Leo’s (Tracey Walter). While Roscoe fills them up, a woman shows up and flirts with him. She is played by Elizabeth Dailey and she seems really concerned if they’re going hunting or not.

This group gets back on the road until they come to a roadblock of what looks like scarecrows. They get out to move them and are attacked by people. They then wake up in a grand room where Father Murder (Malcolm McDowell) is dressed up as a French aristocrat from back in the day along with Sister Serpent (Jane Carr) and Sister Dragon (Judy Geeson). The odds are revealed on Charly, Roscoe, Panda, Venus and Levon to survive this night They also meet the first person that is going to hunt them, Sick-Head (Pancho Moler). He is a little person who is dressed like Hitler. The goal is for the group to try to survive 12 hours while they’re hunted by a gang of clown like killers called ‘The Heads’. They’re separated and each given a weapon, but this game becomes darker as they go.

Now I wanted to go a bit vague with this recap, because to be honest there’s not a lot to the story and it really doesn’t take too long to get into it. I really love this concept though. This actually feels a lot like the game Manhunt that I used to play in high school, but just inserting the idea of these killers we get here. I like that there are bets being made, but I do have issues as well. The three people we see who are running the game are rich, but who are making the bets? Just them or are others watching this? I think that they could have gone deeper with this with more story actually.

I do think that the killers being clowns are a bit misleading as well. Yes, all of them are wearing white face paint of some kind, but that’s really where it ends. The names aren’t the greatest, but that is really me knit-picking a bit here if I’m honest. I don’t get why they have a Hispanic man who is a lover of Hitler. The rest of them make more sense, but that one really just confused me. I do love the idea of these killers having personas a la The Running Man.

This is also writer/director Rob Zombie making another attempt at making grindhouse cinema. I do have to give him credit, with the filters used, it does look that way and before they head into the game, it does feel of the era. It is also brutal with the extreme violence and some of the gore. I actually think though the film needed to either deepen the story or go more gory to actually work better for me though.

Going from what would work better, I just found this to be boring for stretches. There were a couple times the film cuts away from showing us the blood that this film really feels like it needs. It also just didn’t capture me to really follow where we were going. The ending doesn’t fit the build of this game they’re going for, especially with how they build up Doom-Head. It just kind of feels like it wants to do more and doesn’t deliver. I also feel that they establish our ‘heroes’ are very trashy people. I really don’t care about them as it feels like bad people vs. worse people, which is an issue I have with previous Zombie films.

That moves me to the acting here. Sheri Zombie is fine, but I think this is just another vehicle for Rob to show us how good looking she is. I think her performance is just kind of there and doesn’t really add a lot. Phillips I think is best of the ‘heroes’. I wasn’t overly impressed, but he doesn’t hurt the film either. Jacobs, Foster and Jackson are all fine in their roles, but don’t add a lot. McDowell I felt was underused and being with Carr and Geeson are fine in support of him. I just think we needed to know more about them or the game to work. Brake though was absolutely amazing. His monologue to start the film was a bit out of place, but he is the one bright spot for sure. The rest of the killers are fine and round the film.

I’m going to shift this next to the effects of the movie, which when they’re showing it look good. Blood and what not looks realistic, but there are times that it does cut away and that hurts a film like this. I think the setting they’re in is quite creepy and you never really get a good idea of the size of the building they’re in. I think that really gives it a disorienting feeling. The look of the killers is pretty interesting, except I’m confused by Sick-Head’s concept. The film though is shot fine as well.

Now with that said, this film I think had some really good potential, but really just falls a bit flat for me. I like the idea that on Halloween, a game like this run, but I really think we needed to know more. Who is watching? Is it just these three rich people or others? I also think it is a misstep to make the heroes as trashy people as they are as it doesn’t work to root for them against the villains, even though Doom-Head and Sick-Head are as worse than they are. I think the acting is fine aside from Brake, who is great. The movie is really just kind of boring unfortunately and the ending is anticlimactic. They cut away from some of the death scenes, but when they don’t, it does look really good. The soundtrack is fine for what is needed, but it really didn’t stand out to me overall. I was quite disappointed with this one. I still think this is slightly above average, but I would really only recommend it if you’re a fan of Zombie. Overall though it’s definitely his worst film from what I’ve seen.