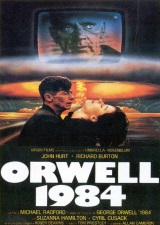 The official synopsis for this film is in a totalitarian future society, a man, whose daily work is to re-writing history tries to rebel by falling in love.

I want to lead of stating that I regret not reading this whole book when I was in high school. It is amazing that the writer of the novel, George Orwell, wrote this back in 1948 (transverse the last two numbers why it is set in 1984). He had witnessed the far left of the political spectrum under the Nazis and the far right under Communism to create the world for this film. I want to say that the story to this is something that is scary to think could happen. Looking at how society is, it would be extremely difficult, but if the government could control the media, it could easily happen. These citizens blindly follow what it says, which we have a lot of people do now. Now if the government could control what comes out in it, which is what would happen. They have even made it illegal to think against or search out your own opinion. That is a scary world to even consider. I felt the acting for this film was good. John Hurt was amazing in his portrayal of Winston Smith. Suzanna Hamilton was good as Julie and Richard Burton was solid as well as O’Brien. The supporting cast did well for what they needed to do as well.

I don’t have a lot negative to say about this film. I think that some of the things from the novel would have helped to explain more. I read part of the novel awhile ago, but I still remembered that the world is broken into three countries, Oceania, Eastasia and Eurasia. We also see that the world is ruined, but I don’t recall the film stating that it was due to Atomic War. These don’t directly influence the film too much, but something that helps set the stage a little bit more. The film also cut out a sub-plot that the novel had, as it dealt much more when he was in captivity than the film did.

I am adding this film to the horror film research for a few reasons. The first is that this would be a terrifying world to live in. There is no privacy for the general population. They can’t think for themselves or against the government, as it is a crime. It is even a crime to fall in love. I also am adding this because they torture Hurt to try to fix his madness of thinking and acting out against them. The torture scene is fairly tame, but doesn’t change the fact.

Now with that said, I would recommend seeing this film. It really puts into perspective why it is good to have citizens to have rights like free speech and ability to make decisions. This world is not one any of us would want to live in, especially since the ruling class has all of the perks and the works do what they are told and kept in line with fear, poverty and starvation. The acting is good and the story is as well. The film does run almost two hours, but I would say give this a viewing if you don’t think the media should be allowed to investigate and keep those in power in check.