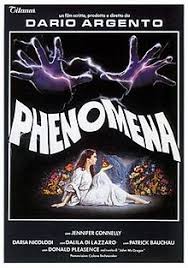 Now for this film, I had sought it out as I am a fan of Dario Argento and I decided to see all of his works. Something that really intrigued me to see this that this film was that it starred a young Jennifer Connelly as well as Halloween Donald Pleasence. The concept also was something that hooked me. The synopsis is a young girl, with an amazing ability to communicate with insects, is transferred to an exclusive Swiss boarding school, where her unusual capability might help solve a string of murders.

This film starts with a young lady going trying to get onto a bus, but she misses it. Instead of waiting for the next one, she goes to a nearby house. She goes inside when no one answers her and we see something chained to the wall. It gets free and chases her. She goes up to a point where it overlooks a waterfall. She is killed. We then see her head fall into the water.

We then shift to Jennifer Corvino (Connelly) arriving in Switzerland. She is the daughter of a famous actor and she has been accepted a very nice boarding school. On the way there, we see that she really likes insects, which freaks out the woman that is riding with her.

They arrive at the school and the headmistress is Dalila Di Lazzaro. We see that she isn’t very nice. Jennifer is rooming with Sophie (Federica Mastroianni), who is in awe of who her father is. The Headmistress comes in and confiscates a poster of her father that Jennifer was going to put up. Sophie also hides her cigarette.

We then shift to Professor John McGregor (Donald Pleasence). He is an expert on insects, especially ones that burrow into dead flesh. He is visited by Inspector Rudolf Geiger (Patrick Bauchau) who is the lead investigator on the murders that are happening in the area. A head was found and Professor McGrgor is able to figure out how long ago the murder happened due the insects that were found on it. He is also wheelchair bound and has a chimpanzee that helps him around the place.

Jennifer has an episode that night, where she is sees things and sleep walks. She goes out onto a balcony where she sees a woman get murdered. She falls from where she is and continues on into the night. She ends up getting picked by a car and the two men take them with her. She flees from it and ends up at Professor McGregor’s house. The two of them hit it off before she returns to the school.

She doesn’t want to stay there though. They run tests on her and think that there is something very wrong with her. It is here that her roommate gets murdered. She was supposed to be watching Jennifer to ensure she wasn’t sleepwalking, but snuck out to meet her boyfriend. Jennifer learns she can talk with insects and finds a glove of the killer. Professor McGregor enlists her aid, since he knows how about insects and has her take a fly with her to find where the first girl was murdered.

Who is the killer? Is it someone at the school she is at? Or is it someone else? Can Connelly uncover the truth before she is the next victim?

After seeing the film, I think it does some things really well. This one is really a supernatural giallo film, which Argento was one of the best with. I like the concept of this being a murder mystery, but to help solve it where there aren’t a lot clues we have a young woman who can talk with insects. I thought the film might be hinting at during some portions that she could see what they see, but that doesn’t seem to be the case. I’m actually glad that wasn’t the route they went. This concept wasn’t overly fleshed out though either.

From there I also didn’t really care for who the killer ended up being at the reveal. I thought the person who masterminds a lot of this would have been more interesting, but the killer themselves didn’t do a lot for me. There are also not a lot of murders in this film either. The chimpanzee aspect I wasn’t the biggest fan of either. It came off as a little bit too gimmicky in my opinion.

Moving from the story, takes us to the pacing of the film. I think the editing of the film was a little bit off to me. It kind of runs a little long and meanders a bit. The tension does get built for the climax, but it didn’t feel as tight as it could have. It is probably has something to do with the film could get a bit repetitive with the talking to insects.

The acting though was pretty solid. Connelly I thought did a really good job. This is one of her earlier films, even before Labyrinth and I liked to see her. She was cute back then. Daria Nicolodi did well, but she doesn’t get a lot of screen time. Pleasence really doesn’t get a lot in this film either. He is a pretty solid actor and his role was somewhat lackluster. I just expect more from him. He wasn’t horrible by any stretch. I’d say the rest of the cast round out the film well for what they needed.

The effects of this film were good. This is something I expected though from an Argento film. The murder weapon that was used was quite interesting to me. We get some interesting kills that looked pretty real to me, so I liked it. There are even some cool scenes of focusing in on the eyes of characters, which I’m also a fan of.

The score of the film was solid. The Goblin did a good portion of it and I was a big fan of them. Not the best soundtrack for an Argento film, but still definitely better than most films out there. It still has some songs that I will listen to when putting on my playlist from Goblin.

Now with that said, this film is still pretty solid. The concept of the film and how they try to solve it are interesting. I thought it could have been fleshed out a bit more and maybe done away with some of the concepts that didn’t work for me. I do like how the film ended though. I thought the acting was pretty solid for the most part, especially from Connelly. The effects of the film were good. There were some good visuals. I do feel the editing could have been tightened up. The score was also something that was really good. Overall I’d say this is an above average film that is a supernatural giallo. If you are into Argento, Italian films or these types of films, give it a viewing.