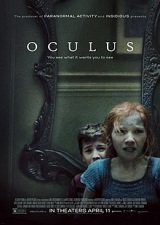 This is a movie that I was intrigued to see the first time that I did. I rented it from Family Video and watched with it with my ex. It was one I liked more than she did, but we both enjoyed it. I then gave this a rewatch and it came up quite a bit for me. It is one that I’ve now seen a third time for the Podcast Under the Stairs’ Summer Series. The synopsis is a woman tries to exonerate her brother, who was convicted of murder, by proving that the crime was committed by a supernatural phenomenon.

So, for this movie, we follow two siblings who have led very different lives. The first one is Kaylie Russell (Karen Gillan). She works with her fiancé, Michael Dumont (James Lafferty), at an auction house. There is one item that Kaylie is very interested in, which is a large, odd mirror. The item is sold at auction.

Her brother is Tim (Brenton Thwaites). He is being released from a mental institution where he was kept most of his life after he killed his father as a child. His doctor is Dr. Shawn Graham (Miguel Sandoval) and he’s pleased with the progress his patient has made. The only thing he is concerned with is that he has gotten help for what he thought happened to his father, where his sister hasn’t. Dr. Graham wants to make sure that his patient leads a normal life going forward. Tim is released and his sister is there to pick him up.

Kaylie tells him that she has got the mirror in her possession for a couple of days and she reminds him of the promise he made to her when they were younger. She wants him to help her destroy the power this mirror has. Tim doesn’t remember his promise and believes he was a sick individual. He believes that Kaylie might be experiencing the same things, but she has not sought help to fix it.

Intercutting with this, we get them as children. Kaylie is portrayed by Annalisse Basso while Tim is Garrett Ryan. They are moving into a new house with their parents, Marie (Katee Sackhoff) and Alan (Rory Cochrane). He has his own software business, so they are moving into the house so he can have an office to work from home. Marie is a stay-at-home mother and runs the house. The same mirror that was sold at the auction is bought by Alan and placed in his office.

This mirror has haunted her life for some time. She has a detailed plan set up and she intrigues Tim enough to hear her out. She has multiple cameras set up and they’re on different power sources. She has food, water and timers to set up to keep her on track. She also has different things the mirror can feed on. Something else she does for her record as well as for Tim and us, the audience, is fill in the history of the mirror. It becomes a nightmare and a battle to prove if this mirror is behind what happened to their family as children. Or is Kaylie losing her mind trying to prove it. Interestingly, we see the events from their childhood intercut with it.

That is where I’ll leave my recap and I’ll start by saying this is a great concept. It features two things that scare me. One is looking into a mirror and seeing something that is not there, or movement from the reflection that is different from what the looker is doing. The other is things appearing and moving behind a person without them noticing. I thought both were great in helping make this film have the eerie feel it has. I should say that here, we get an atmosphere that is terrifying.

I think I’ll shift slightly and bring the effects here next. There is some self-mutilation that had me cringing, but not too much which is good. They look to be mostly practical with some CGI used here to enhance. I like the look of entities from this mirror having mirror eyes. What they did with Marisol Chavez (Kate Siegel) was good. I don’t have any compliments here.

Moving back to the story, I like what they did in setting up the history of the film. Tim is questioning things that Kaylie is saying, but I love that she has an answer for him at every turn. This makes it interesting for me because it feels like arguing with a conspiracy theorist. The rational part of us agrees with Tim. Since we are watching a movie, we know that Kaylie is right. As it goes on though, I’m questioning things since this mirror blurring the lines of reality. I thought this was well done.

Going along with this, I want to pull in the editing. We get to see the events of the past play out while it is being intercut with the present. The first time I saw this movie, it confused me. With these last couple viewings, it is genius and I’ll give credit to Mike Flanagan for what he’s doing here. It is interesting, because the events of Tim and Kaylie as children are mirrored into what they’re doing now. Much like the mirror that perverts things, they’ve switched roles. I can appreciate what they’re doing it and it works so well in my opinion.

I will go then to the acting, which I thought was good. Gillian is great here as the sibling who hasn’t gotten help. We know what we are getting, but we still question if she has descended into madness by not getting the help that her brother has. I like the duality that Thwaites presents having been in a mental hospital. They play well off each other. I liked Sackhoff and Cochrane as the parents. Basso and Ryan are good as the children in the past as well. I liked to see Sandoval and Siegel here, as they’re both solid actors. I’d say the rest of the cast rounded this out for what was needed.

Then the last thing I want to go into would be the cinematography. This is something else that I thought was great. Flanagan has such an eye. I’ve already said I liked the effects and the editing; he frames shots so well that these work for me. I’m not shocked that he’s had the career that he has had seeing what he is doing here. It is great.

With that said, I would recommend giving this film a viewing. It is a solid haunted house movie with the mirror being the cause. As said, the acting is good, the overall story is solid and it has a great back-story. The overall atmosphere is eerie, especially since it clouds what is real and what’s not. The soundtrack is good and there is just enough self-mutilation to add some gross-out element. It can get a bit confusing, so you need to pay attention as it shifts between past and present, as well as meshing the two. This is one that holds up for me after multiple viewings and I can appreciate it more. I think this is a good movie, bordering on great.