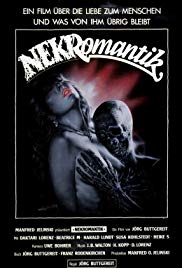 This film is one that I never heard about until getting into podcasts. I actually heard one of my favorite shows to listen to cover this as well as other films from the director, Jörg Buttgereit. It definitely was one that made me nervous to check out, but also excited me. This was actually the midnight movie on Friday at the Nightmares Film Festival, so my first viewing was on the big screen. The synopsis is a street sweeper who cleans up after grisly accidents brings home a full corpse for him and his girlfriend to enjoy sexually, but he realizes that she might like the corpse more than him.

We start this off with a woman that is urinating outside. She gets back into the car with her husband and the two of them end up getting into an accident, with both being killed. Through this we meet our main character who is a street sweeper for a company called ‘Joe’s Cleaning Agency’. Our main character is Rob (Bernd Daktari Lorenz). He doesn’t really get along that well with his co-workers, but when he returns home, we see that this is the perfect job for him. He steals body parts and keeps them in jars. He also lives with his girlfriend, Betty (Beatrice Manowski), who also shares the same interests.

The film then goes a bit artsy here where we see an interview on television of a psychiatrist on how people can overcome their fears as well as seeing a man killing a rabbit. He then skins it. The next images are of a man who is hunting and accidentally kills a gardener. The body is discarded in a pond nearby.

This brings Rob and his crew to clean this up. He gets the idea to bring the body home for him and his girlfriend to have fun with. A steel pipe is added and the two of them have an interesting encounter with the corpse. Things take a turn for the worse though. Rob’s co-workers don’t like him and he didn’t wash his work jumpsuit. He’s taken to the boss where he’s fired. He tries to find solace with his girlfriend, but she is upset he lost his job. Rob tries to pull it together, but the nightmare has just begun.

Now I had to go a little bit lighter on the recap here since there’s not a lot to the story. We get some long, interesting takes of things that are pretty horrific if I’m completely honest. I won’t kink shame someone for being into necrophilia though. It was pretty gross to watch if I’m going to be honest. I’ll parlay this into the effects, since they’re really good. I could tell that the body was fake, the thing though is they make it so gooey that I lost myself there. It didn’t necessarily sit well with me, but I’m weirdly glad I got to see it. There are other things that were done practically and don’t necessarily look real, but the movie has such an arthouse feel that it works. I do think that it is shot very artistic and despite what we’re seeing, it looks great.

To shift back to the story though, I didn’t catch on until I read up a little bit about this film that the killing of the rabbit was supposed to be Rob’s father and seeing his beloved pet murdered. We later see this sequence shown in reverse. My take on this, was that peeling the skin from the rabbit and returning it was Rob taking off his inhabitation to explore his sexuality and then when his life falls apart, returning his protection to the depressing ending. Betty left because he can’t stand up for himself and we also see that when he’s bullied at the theater in the film as well.

I’m going to move this into the pacing of the movie. It only runs at 75 minutes and to be honest, that’s a perfect length. The story is quite basic, but it is all about the visuals here, which I don’t recommend for everyone to check out. It is odd though, because of how beautiful the images are actually shot, despite their nature, and coupling that with the music. The lovemaking scene has such a song that would fit for a normal sexual encounter, it is almost sensual. What is really being shown is quite the opposite, but it definitely works. This one has an extremely bleak and depressing ending, but it really works for what the film is giving to us.

The last thing to cover would be the acting. It is quite amateurish, but I’m forgiving of that when you’re dealing with an arthouse film. It isn’t about the performances. It is about the images that we are seeing. I do think that Lorenz fits the role of Rob very well. It is interesting that bringing home this corpse makes his world fall apart and the depressing nature of him really did fit. Manowski and the rest of the cast really don’t have big roles, but definitely fit in the downfall of our main character for sure.

Now with that said, I need to re-iterate that this film isn’t going to be for everyone. It has some really taboo subject matter and the arthouse take on it makes it grotesque while still being beautiful. There’s a gritty look to it that makes it feel even more real as well. I think that the effects, even if they don’t necessarily look real, there’s just a surreal feel and it made me question if what we’re seeing. I have to give credit for that. The soundtrack doesn’t necessarily fit in the general idea, but oddly it does in this artsy type way. There’s not a lot to the story, but it doesn’t really need too much to get by what the film wants to convey. Personally I have to say that I enjoyed this in a non-traditional sense and overall this is an above average film.