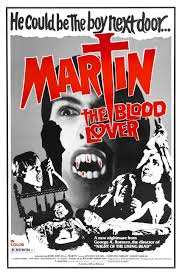 This was a film that I really had wanted to see for some time. I finally got the chance when it came to my local theater as part of their Horror 101 series. This is quite an interesting film I have to say. The synopsis is a young man, who believes he’s a vampire, goes to live with his elderly and hostile cousin in a small Pennsylvania town where he tries to redeem his blood-craving urges.

We kick this off with people getting on to a train. We know that it is bound for Pittsburgh and then on to New York. We see a woman get on and a man who is watching her. He is our title character Martin (John Amplas). The woman is riding all the way to its final destination. She settles into her car. Martin also prepares for something else. He fills a syringe with something and breaks into her car. He waits for her to exit the bathroom and sticks her with what is in the needle. She goes to sleep and he slits her wrist to drink her blood. He sets this up to look like a suicide though.

Martin gets off in Pittsburgh and we meet his older cousin, Cuda (Lincoln Maazel). He has strict rules for him as Cuda thinks that Martin is a vampire. He constantly calls him nosferatu. It is through interactions that we learn Cuda is extremely religious and is Catholic. He also believes that their family is cursed with multiple vampires with Martin the youngest. They have to take care of him or a curse will fall on him and his family.

Also living in the house is his cousin Christina (Christine Forrest). She has a boyfriend, Arthur (Tom Savini). She knows it really isn’t going anywhere, but there’s nothing else. Martin works in Cuda’s store and Christina tries to help him. She isn’t religious and doesn’t believe the things her father is saying.

Through work, Martin meets Mrs. Santini (Elyane Nadeau). She is a sad housewife who comes on to Martin as he isn’t very talkative, but he treats her with respect. We also see that Martin stalks victims when he needs to drink blood. His cousin Cuda warns him not to though, or he will have to take care of him.

Now what I knew coming into this film is that Martin might be a vampire and he might not be one. I always thought it was a young man who was confused and trying to find himself. I also knew that it was grounded in reality, which was something I was quite intrigued to check out. These both are pretty close to what I thought.

The first thing I want to talk about is the vampire aspect of this. I found it interesting that Martin thinks he is a vampire as does Cuda. He believes that he is 84 years old, which is young for a vampire. The interesting thing with this film is that it is edited together with black and white scenes which look to be over in the old country. I’ve heard this family is Polish, but it could also be Romanian, I don’t think the film ever specifies. The film never comes out and confirms if this information is right either, which is a classic George A. Romero move. For whatever reason though, I don’t mind this. I personally don’t think he is a vampire, but I could make the argument he is.

Going from here, the reason I don’t think this he is a vampire is because the film is split into two different worlds. We have Cuda who represents the dying older generation. The film goes deep with this in that the town they are living in is dying. There is no work and it is only the older generation clinging that it is a great place to live. They are also deeply religious and we see the parallels in events that Martin remembers from the past. On the other side, you have Christina, Arthur and Martin. The first two want out of the town and are based more in science. Martin is too, but he does think he is a vampire. He debunks what we know in the movies and that vampires are magic. He states it is a sickness that he needs blood to satisfy, which really could possible be a thing. Like anemia is just the lack of blood or the lack of iron in one’s blood.

The final aspect of the story that I wanted to touch on is Mrs. Santini, Martin’s victims and the women in the film in general. There is a blend of independence and the old way of life. The train victim (Francine Middleton) is a woman who is traveling from Indiana to New York by herself. The housewife (Sara Venable) that Martin stalks is having an affair. This is a woman in what I assume is in a loveless marriage and she taking matters into her hands. Mrs. Santini is also in a loveless marriage. She wants to have an affair with Martin, but she also feels guilty about it. Part of this is she is Catholic and that is their MO. She is trying to be independent though. The film also seems to be questioning the sanctity of marriage. Christina is very independent and is willing to use Arthur to get out of unhappiness of her father and the town as well. I also see the aspect of the modern women that can make decisions for themelves.

This brings me to the pacing of the film. It is crazy to read there is a 2 hour and 45 minute cut of this film as the one available to view is 95 minutes. I thought the pacing of the film was great. It moves along at such a good pace. On top of that though, the editing of the film is amazing. Cutting things that Martin is experiencing in the present with things he those the past was great. On top of that though, some of the things are modernized and you can see the parallels. I have heard that the black and white is what he perceives things to be, which just makes him an unreliable narrator. I thought the ending was great and the reason it happens is wrong, but not completely.

Acting for this film was also great. Amplas was a guy I seen in other Romero films and didn’t realize it. Romero is also a guy who will cast the best guy and actually rewrote this script because of that. Amplas plays this role perfectly and he seems like a guy who is inexperienced and just simple. I do question if he is really 84 years old and vampire, but I believe that he believes it. Maazel was solid as the older generation who bases their belief in religion. It is to the point where they invite the new local priest, Father Howard (Romero), over for dinner. Forrest did really good in her role. It was fun to see Savini in this film, without his trademark mustache I might add. I thought the rest of the cast round out the film for what was needed as well.

Next would be the effects of the film. Savini did them, but this is still his early work. It is interesting that the blood used in this film looks better than it did in Dawn of the Dead, which came out the following year. The effects in the film were practical and looked really good. The film was also shot very well, which I figured knowing that Romero was the director. He uses some interesting angles which really give the film more character.

Now with that said, this film is really good and I’m glad that I finally got a chance to see it. I’m a big fan of grounding the vampire mythology in realism in a way that Romero can. The film also seems to be tackling some deeper issues in it as well, which is something I’m also a big fan of. I thought the editing of the film was great, the acting was right up there as well. The effects were done practical and looked good. Score fit the film in an odd way and definitely helped to build up the mood they were going for. I really liked film and I would recommend checking it out. It is a lesser talked about Romero classic and a good film.