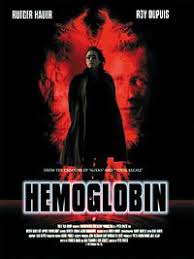 This was a film that I had originally heard about on a podcast when one of the reviewers had said this film wasn’t as bad as its rating said. My sister recommended this as well so I decided to give it a viewing. The synopsis for the film is a man travels to an island with his girlfriend in search of his relatives, but he finds maybe more than what he wanted to know.

Now the synopsis is a bit misleading, as the couple is actually married. The man is John Strauss (Roy Dupuis) and she is Kathleen Strauss (Kristin Lehman). They go to this remote island where he was supposed to have been born. This is actually something I really liked. We first see that John has some anomalies about him. He has two different colored eyes, he has a blood condition that is getting worse and he suffers from seizures. Part of why they are coming to this island is to get some answers as to why he is experiencing these and for answers.

The beginning of the film actually gives some background information too. We see a woman by the name of Eva Van Daam (Gillian Ferrabee). There is narration over top of it that this Dutch royalty has been engaging in inbreeding. This is being outlawed so she takes her whole family to flee being persecuted. We also see that her and her twin brother are making love as well. What I really like about this is that there is factual history about royalty engaging in this and there have been genetic issues that have arisen in these families because of it. It is an interesting concept for this film.

John and Kathleen reach somewhat of a dead-end. The daughter of the innkeeper where they are staying recommend they go see the old nurse that is living in the Van Daam estate. This leads them on the path to discover more about John’s past than they might want to know.

Going along with this, there is an issue with the cemetery. The innkeeper is Byrde Gordon (Joanna Noyes) who also runs the funeral home. It appears that she is using caskets that aren’t very good and the bodies need to be exhumed and reburied. While they are doing this, they see that something is getting into these caskets and some of the bodies are missing. They find holes in the ground that lead to something.

The last thing I want to touch on with the story is that I found it interesting this is based off a short story by H.P. Lovecraft entitled The Lurking Fear. I am intrigued to check out the story to see how much of this what was he wrote and what had to be added to make the film that we saw.

This film does have some pacing issues though. We get quick glimpses of things, but there is quite a bit of time in-between. The story is interesting, but even that is broken up so it takes too long to get going. We don’t even see the creatures in this film until almost half-way through. It could actually be even longer than that. I think the film could have done better in this aspect to help keep interest. The ending was a little bit anticlimactic as well.

As for the acting, I thought it was decent. Dupuis was fine as the sickly husband. What I found interesting to him is that he very weak. He does get urges that even scare his wife, which I did find to be a little bit odd. At that point they had not uncovered much, but he was acting out of character. I think that should have been held off for a bit. Lehman was fine as the concerned wife. It was nice to see her topless as well. I do need to give a shout-out to the alcohol doctor, Rutger Haur, who ends up learning what is causing this. He is a solid actor and does some really good things in the horror genre. The rest of the cast round out the film fine, but none really stood out.

There wasn’t a lot in the way of effects for the film. There is a little bit of blood and that I thought that looked good. The creatures in this film have odd weapons. The film is edited in a way where when they attack it looks pretty realistic. Much of that was hiding it like they did, which I thought was a good choice. The creatures themselves look really good as well. They were quite creepy to be honest and I could see years of inbreeding making them possible look like this and forcing them underground due to persecution. By being underground, they develop an issue with light as well, which also would happen.

Soundtrack for the film really didn’t stand out to me. It doesn’t hurt the film, but I never really noticed it. I do have to give it credit for not taking me out of the scenes which is a plus.

Now with that said, I can’t recommend this film unless you are a Lovecraft fan or if this sounds good. The film has some issues. I think the concept behind the film was good, but the overall execution was not. The most glaring was the film is boring for most of it. It tried to build a mystery and I really didn’t feel it. The subplot of the cemetery I get why it was used, but it doesn’t add all that much. The ending was also anticlimactic. The acting itself was fine, but no one really blew me away. The effects were good. The soundtrack also left something to be desired, but it doesn’t hurt the film. I would say that this film was below average in my opinion with some good aspects.