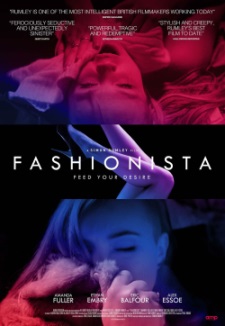 This was film that I heard about through the podcasts I listen to, so I added on a list of films to see. I heard that it wasn’t necessarily horror, but it definitely still intrigued me to check out it myself and make a determination. I do feel that it is close enough to horror so I’m writing this. The synopsis is a woman who uses clothes as an emotional crutch discovers her life isn’t as ideal as she thought…

I do like that this synopsis was pretty vague. The story isn’t overly complex, so this should be short. We follow a woman, April (Amanda Fuller) and her husband, Eric (Ethan Embry). They live in an apartment that is jammed pack full of clothes. We can see that they are hoarders and that April needs clothing. She is particularly about what she wears and even though they don’t have a lot of money, she is into fashion. I’m not entirely sure though that Eric is a hoarder. This is the surplus of their store, which is a thrift shop.

April starts to believe that Eric is being unfaithful. There are some red flags and he is going off on a lot of business meetings. She thinks it is their cute, young employee Sherry (Alexandria DeBerry) he’s seeing behind her back. April calls Eric out when he wants to move to Dallas to open up a second location with Sherry. She thinks it’s to be with her to and she confronts Sherry about it as well, who tells her that is not the case.

There is something more to all of this though. April is seeing things and isn’t the most stable. She actually starts to see Randall (Eric Balfour). He gives her a budget to buy new clothes and we see he’s into some pretty dark things the deeper that April gets into all of this.

Also going with this is Alex Essoe. She is in a mental hospital and we see as she is getting released. How does she factor into all of this?

This is going to be a really hard film to review without spoiling, but I’m definitely going to do my best. As I kind of alluded to, I can see where people would say that this isn’t horror. I personally think it is for a couple of reasons. The first is the nightmare quality of the film. April is really struggling to keep it together. First it is thinking that Eric is cheating on her. Then it is the dark things that Randall gets her involved in. All the while she is using clothes as her crutch to keep it together. She has an obsession with them to the point where she spends all of her money. This descend into madness is one thing that you see quite a bit in horror.

The other aspect is going back to the nightmare quality of this film. It is an arthouse film, so keep that in mind prior to seeing this. We see the vision and dreams that April has which include her and Eric covered in blood as well as seeing some odd ritual happening. It definitely made me feel uneasy. The film also has a couple of moments of revenge as well, both of which I can’t blame the person committing it.

Editing is something that is quite interesting in this film as well. We get a narrative that is kind of straight forward, but at times we jump ahead to show us images of something that get explained later. This threw me off at first, but once I figured it out, I didn’t mind it. That makes this a film one you really need to pay attention to, to ensure you don’t lose your way. It culminates in an ending that I loved.

A film like this really needs to have acting, which it did. Fuller I thought did a solid job. She seems so sure of herself at times, but we see that it is shaky. She goes through some heavy things in this film to be happy and it takes it toll on her. I love what happens at the end of the film with her as she finally grows into the strong woman she is supposed to be. Embry has a smaller role in this film, but man he is a great actor. I like the grittiness of his character and he fits into what this film needed. Balfour is another guy I like. He doesn’t do a lot, but he just has a natural charisma for being a sleazy character. He gets to use that in this and it’s great. I wasn’t sure how Essoe fit into this film, but when I figured it out, I thought it was perfect. DeBerry was cute and I thought her as well as the rest of the cast rounded out the film for what they needed.

As for the effects of the film, this is something it really excels at. Knowing this was an arthouse film, I noticed early on that when April is losing touch with reality, the world loses color except for certain things. It normally is clothing or make-up, which is fitting. That is what she clutches to, so of course, they would maintain their color when the world is falling apart around her. There’s a bit of other effects in the film, which I think were done practically. The film is also shot beautifully.

This then brings me to the soundtrack. It is quite electronic if I’m remembering correctly. It really stands out when the film is doing almost montages of showing us images. It really helps to establish that surreal feel that I really liked from the film. It probably isn’t a score I would seek out to listen to, but it was fitting for what the film needed.

Now with that said, this was film I knew very little about and came in to experience it. I really did enjoy it. It doesn’t have the most complex story, but seeing April deal with addiction and her life as things around her fall apart is interesting. It is a story that isn’t unrealistic. She gets herself into quite the scary situation. The editing is straight forward for the most part, but we do get images and things that happen later. It is acted very well and I was impressed across the board. I thought the arthouse aspect of the film was good and adds a surreal feel. The film is also shot beautifully and the score fits for what they needed. Now not everyone will find this to be horror, I felt that it is close enough. I found this to be a good film that I enjoyed checking out. I would only recommend it if you are into these types of films.