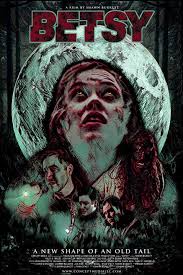 This film I actually got see at the Nightmares Film Festival. It was the last film to be shown, so I can say a big part of me was powering through. Not that this is a knock against the film, but I was somewhat delirious. The official synopsis for this film is after surviving a vicious assault in the city, Betsy (Kelci C. Magel) moves to the country in hopes of starting over, but as she begins to recover, something begins clawing its way into the moonlight.

We kick this film off in Dayton, Ohio. Betsy is walking to her car when something attacks her. We only get a glimpse, but the person looked animalistic. She is able to get away and survives the attack.

To get back on her feet, she moves in with her friend Kayte (Marylee Osborne) who also owns a coffee shop. Betsy starts to work there. She also is going to a support group where they help people like her who have gone through similar traumatic events. One day while she is working a couple of cops come into the coffee shop. They are Dusty (Justin Beahm) and James (Ryan Stacy). They are meeting with their friend Colin (Joe Kidd), who takes a liking to Betsy immediately.

What I did like about this film is it is working with some deeper subplots that are pretty prevalent in today’s society. Betsy is trying to deal with being attacked. In her case she is bitten by someone, but this can be seen as an allegory for being sexually assaulted. This attacked has changed her in more than one way. Now I know she doesn’t want it to define her, but at this time it really is.

Another issue that this film seems to be focusing on is moving on after an attack like this. She has a great friend in Kayte, who is there to help. She is also pushing her to bring some normalcy back to her life as well as getting back out there to meet people. Betsy does seem somewhat ready, but while watching this I thought that Kayte might be pushing a little too much too quickly. It is a film so they have limited time, but these are things I thought of. This also works out that Colin seems like a nice guy. Things do take a turn though when her animal urges with the full moon coming take over.

I also wanted to point out that the first attack that is done by her as a werewolf is a scumbag who has a criminal record for hitting his ex-girlfriend. When we see what he tries to do to Betsy, it justifies what she does. On top of that though, it seems like he has probably done this before as well. I don’t necessarily condone violence, but this is really you reap what you sow.

Now I will say that I did have some issues with the pacing. It has a low running time, so it never really drug for me. The problem that I really had was I think it takes too long establishing everything and not enough time with dealing with her as werewolf. The ending isn’t happy, but it also doesn’t really feel like a good conclusion. It almost seems like it is trying to set-up a sequel more than anything. I’m not always opposed to this idea, but I do like my films to have an actual conclusion. There also was a bit of an issue with the timeline that every one gives in talking about the attack on Betsy. I get that it wouldn’t necessarily be exact as people just generalize, but when it is in regards to the next full moon, it did kind of annoy me.

I really didn’t have any issues with the acting though. I thought for a lower budget film that they were pretty good. Magel I thought does well in that she starts off as shy. Even more so due to the attack that happened to her, but as the full moon comes; she has a more aggressive nature. This was a good character arch and I believed it. Osborne was good as the friend. I give her a lot of credit for what she is trying to do to help. Beahm and Stacy were both solid. I don’t really buy that Sam is the chief of police and it doesn’t seem like there are anymore cops in the area. I do like their research and not believing what they find at the attack. Kidd was also good as the guy who is trying to help Betsy as well. The rest of the cast round out the film just fine for what was needed.

The effects I didn’t really have any problems with either. I’m pretty sure they were CGI, but there aren’t really a lot of them. Some were done practically, like the look of the wounds and I thought those were fine. The film did a solid job of hiding the attacks though and having them happen off-screen where we see the aftermath. I think this is a good choice if you can’t make them look real. The look of Betsy as a werewolf was good in my opinion. She s bipedal if you are curious as well. It plays just fine on the camera. The blood looked good and I also thought the film was shot well.

Now with that said, I thought this film was pretty fun. It was filmed on a lower budget and I think they did very well for what they had to work with. I like the concept of the film, but the undertone is what makes this one a little bit different. It brings up some issues that are very prevalent in today’s society. We are actually rooting for her with one of the kills. I thought the acting was fine for what was needed. There were some pacing issues that I had with the film, but it doesn’t ruin it. I do think they should have tightened up how it ended as well. The effects were fine. The score of the film didn’t really stand out, but I didn’t have any issues with it either. I did find this film to be above average. If you like lower budget horror films that are solid or are into werewolves, I would give this one a viewing.