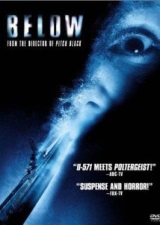 This film takes place on the American submarine U.S.S Tiger Shark during World War II. They are above water and see that there are British survivors ahead of them. The man in charge is Bruce Greenwood. He is met by his first mate, played by Matthew Davis. They see that there is a ship coming toward them, so they are in a rush to collect the survivors.

They do and then dive under. Another member of the command crew is Holt McCallany, who is in charge of identifying ships. He also is an accomplished in the use of the yo-yo. The survivors they collect are a woman doctor, played by Olivia Williams, a navigator, played by Dexter Fletcher and a patient who is out cold at the moment. This gives the crew a bad feeling because a woman on board is considered bad luck. Fletcher also tells them they are destroyed by a German u-boat.

They are constantly trying to keep away from the ship that is above them. They have to be extremely quiet and they are at first. That is until a record player starts on its own. McCallany believes that it is Fletcher or the other patient that turned it on. Davis is also scolded, because the crew feels he is talking too much to Williams.

It is then brought to the attention of Greenwood that the patient is actually a German soldier. He believes the German is the one trying to tip off the ship and a showdown ensues. Greenwood has a gun on him and when the German goes for a knife, he’s shot. Williams realizes now that Greenwood is not a good man. Two of his men are told to wrap the body of the German up, one of them played by Jason Flemyng.

They end up using it to play a joke on Williams and she is irate. She then learns that there is something going on with this submarine. There was a captain on this vessel before, played by Nick Hobbs, but he fell overboard and hit his head. Williams finds the patrol log and finds some of his entries. She might have stumbled on to something, especially since there is a picture of Hobbs with the singer from the record player, his favorite. She is scolded by Scott Foley for being out of her cabin.

It should be pointed out that there are some other members of this crew that are important. One is named Chief and he’s played by Nick Chinlund. He keeps this ship running and he knows all about her. There is also Zach Galifianakis, who is Weird Wally. He tells stories and believes in the supernatural.

The record player comes on again and this time Greenwood breaks it. The ship is above them and starts to drop depth charges. They take some hits, but they luck out when the last one lands on their deck and bounces along it until it moves harmlessly away. The ship isn’t done yet as it does major damage with a dragging hook.

Williams continues to look into what happened with Hobbs. She ends up speaking with Greenwood about it and he tells her that Hobbs wanted to open fire on the survivors, but he was overruled. That was when he fell overboard. Williams believes what he says, but asks how he hit his head.

The crew begins to see Hobbs, or what they think is him. What really happened to Hobbs? Who is responsible? Is the submarine having normal malfunctions or is it something else? Will any of the crew survive?

I had not heard of this film coming in and found it to be quite interesting. The concept is scary even without the prospect of having a ghost. Most of the film takes place with the submarine under the ocean, which gives it that claustrophobic feeling which can be scary. To build on that, there is a German ship above them that they have to be quiet or they are under attack. They also are constantly having things break or go haywire. I also really liked the mystery of this film as we figure out what really happened. I felt the acting was good across the board as well. What I also really like is that we never learn if they are being haunted by the ghost or if everything that is happening is just mechanical failure.

I did have some issues with this film though. The first thing would be that I don’t feel like the crew would do what they did to Hobbs. It is possible, especially being stuck in a submarine where stir crazy is something that could definitely happen. It would be hard to believe they could get away with it though. The film does introduce some kind of ghost that seems to be something that is out at sea. I would have liked to learn more about this, but it doesn’t hurt the film, just a personal thing for me.

With that said, I would recommend giving this film a viewing. This film makes you question what is real and what isn’t. The acting is good and they are trapped within the claustrophobic confines of the submarine. With the carbon dioxide levels rising they are seeing things. Is there are a ghost or is it hallucinations? The story, mystery and concept are all good as well. I would view this film at least once. It is a hidden gem that had little publicity.