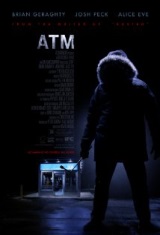 This film begins at work with a man played by Brian Geraghty talking on the phone to a client. He is telling him that he has spent most of his retirement 401k on investments that has lost money. The man is clearly upset and Geraghty tries to tell him that he can try to make it back. He gets hung up on.

Behind him is a friend that he made, played by Josh Peck. He gives him flack for what he has done and tells him that his crush, played by Alice Eve, is leaving the job. He tells him he needs to ask her out. Geraghty doesn’t.

Both go to an office party and there Geraghty goes and talks to Eve. They actually hit it off well, but Geraghty is too nervous and misses his chance. She has a look on her face that she is bothered by it. Geraghty goes outside thinking she forgot her hat and ends up convincing her to let him give her a ride.

The problem becomes Geraghty is supposed to give Peck a ride home and he can’t get out of it. The three drive toward Peck’s house and him being drunk makes it awkward and he wants to get food. He needs to stop at an ATM first.

It takes a while at this indoor ATM. All three of them come inside to see what the problem is. When they go to leave though, there is a man wearing a parka staring at them. He doesn’t say anything and doesn’t do anything. He just stares at them. A man with his dog ends up in the parking lot and he kills the guy.

Will they escape? Will they figure out what he wants?

This film had me interested the whole time until the ending. This guy who is keeping them inside is creepy, he doesn’t say a word and we never find out what he wants, that’s what made this character scary, but it also ruins it for me. The ending never tells us what the purpose of what he is doing.

I would still recommend this film if you want to see a creepy thriller. I had problems with the ending, because I feel it makes the whole thing we saw somewhat pointless. The planning this guy puts in is amazing and the fear of not knowing is great for the characters trapped. What they go through was enjoyable to see, I just wanted more in the end. Not a horrible film, just a horrible ending.