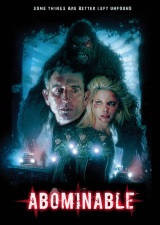 This film begins with a man being awoken by something outside; he is played by Rex Lin. His wife also is awaked by it and she is played by Dee Wallace. They go outside with a shotgun and their dog to find that one of their cows has been attacked by something. It is torn open. Wallace asks if a bear did it and Lin informs her that it was something else. They hear a roar and their dog runs off. They run back to the house and hear the dog cry out. Whatever is outside attacks the house, but finally gives up.

We then see two men in a station wagon. One is in the car and he is wheel chair bound, he’s played by Matt McCoy. The other one is a nurse played by Christien Tinsley. We see that Tinsley was asked by a doctor to take McCoy to his house up here. It turns out that he and his wife were rock climbing, but an accident occurred, killing her and paralyzing McCoy.

They stop off to get gas and supplies. Tinsley goes into the store to pay and meets with the clerk played by Jeffrey Combs, who is smoking while on an oxygen tank. Combs is very odd on top of that.

Next they arrive at the house and McCoy has a flood of emotions. He didn’t want to come on this trip, but his doctor thought it would be good for him. Tinsley does inform McCoy that he didn’t get him soy milk so he would need to make his shake with regular milk. McCoy reveals that he is allergic to milk and Tinsley in a huff states he will go back to get him some. McCoy tries to change his mind, but he leaves anyway.

That is when a jeep full of young women shows up. There is Haley Joel, Karin Anna Cheung, Natalie Compagno who is getting married soon, Ashley Hartman and Tiffany Shepis. Hartman immediately gets on her phone, much to the displeasure of her friends. McCoy comes out onto the porch and watches them.

Tinsley is gone for much longer than McCoy expected. He hears something in the woods so he goes to check it out with binoculars. Hartman comes out to call her boyfriend. McCoy goes to clean the lens when he sees something move. He then notices that the young woman is gone. He tries to yell across to the house that she has been taken, but Cheung comes out to call him a pervert and lowers the blinds. McCoy tries to send an e-mail to the police telling them what he saw, but Tinsley comes home and prevents him from doing so. He tries to convince him of what happened, but he didn’t actually see it and Tinsley makes a deal that if she is not back after dinner, then he will go talk with them.

We then shift to Lin, Combs and their friend Lance Henrisken. Lin is out to hunt down the creature that killed his livestock. Combs claims to have a map that will lead to its lair and that his grandfather has seen this creature. Henriksen goes out into the woods to look for it. He finds a cave and then finds Hartman inside. Her stomach is torn up and then something pulls her deeper inside. He flees back to the camp and they try to fight it with their guns, but they fail.

McCoy gets the idea to text the phone by knowing the woman’s name and a website on his computer. It goes through and the girls find the phone. They read the message and they try to figure out what to do next.

The film then shifts to the police. The sheriff is played by Paul Gleason. He has two deputies, played by Phil Morris and Chad Smith. Morris did get the e-mail from McCoy and asks if he should check it out. Gleason tells him no and that they will try to call the house when the phone lines are working again.

There are some harsh words shared between Cheung and Shepis, with Shepis getting a drink thrown into her face. She strips down and gets into the shower when McCoy sees the eyes of the monster in the woods. He wakes up Tinsley, who is passed out from drinking too much. He takes the binoculars and doesn’t see anything. He does see Shepis in the shower. The creature then attacks her when she gets out, pulling her through a window. McCoy again tries to show Tinsley, but he decides to sedate him. McCoy outsmarts and injects Tinsley. He then sees the creature outside his window, causing him to fall out of his wheelchair and knock him out.

Will they be able to get away from this creature before it is too late? How many more victims will it claim?

I do have to say that I liked the idea of combining Rear Window, having a man who is wheelchair bound, with a monster film. I thought that was a good concept. This film also uses the idea of the ‘The Flatwoods Monster’ and making it into a Sasquatch. I was a big fan of bringing horror film veterans Henriksen and Combs as well. I will say that monster does look a little bit fake, but it could have been much worse to be honest. The film also has some violent and bloody deaths. Shepis also gets nude as well.

I do have to say the acting is subpar for the most part. The story is a little boring and the pattern the creature attacks doesn’t make too much sense to me. I also don’t understand why the girls do not have a curtain for their bathroom. It does have a reason for the film for something to be seen to progress, but it also allows McCoy is spy on a nude Shepis. I also didn’t like that Henriksen stumbles upon the cave for the monster pretty easy, you’d think he’d be found by now if that was the case. I also didn’t believe that the police would not send someone out after the e-mail; they aren’t busy to begin with. On top of that I’ve never heard of the program that sends text messages that McCoy uses to the phone. The phone I don’t think would ring like it did when getting a text. Plus the monster knocks down the power pole, yet everyone still has power, just no telephones. As you can see, there were quite a bit of issues that were not thought out.

Now I originally watched this film, because my sister is a big Shepis fan. I would only recommend seeing this film if you are into bad horror films. The acting is subpar, but it does have a good concept. The story and screenplay are a little slow. There are a lot of things that don’t make sense to me as well. The monster doesn’t look horrible, but I will give it to the film in having some pretty violent death scenes. There are definitely much better animal attacking human/sasquatch films out there than this one. Shepis does get nude, but when she is in one you’d have to try hard to find one she is not.