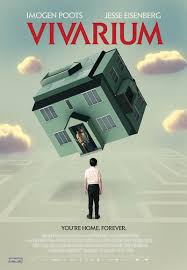 This was a film that when the trailer was shown before quite a few movies that I saw with Jaime, I knew that I wanted to see it. With the pandemic and the Gateway Film Center being closed, I was bummed that I wouldn’t get the chance to see this on the big screen. When I saw it was on VOD, I checked in with the lady to see if she was interested. We did give it a watch and I heard another podcast host briefly cover this as well. I’ve also given it a second viewing to see where it would land for my end of year list. The synopsis is a young couple looking for the perfect home find themselves trapped in a mysterious labyrinth-like neighborhood of identical houses.

Now this movie has a creepy scene of seeing a bird’s nest. There’s one that is bigger than the others and it slowly pushes them out. We see that this bird grows to be larger than the mother that comes back.

It then shifts to inside of a classroom. The teacher is Gemma (Imogen Poots) and the children are pretending to be trees as the wind blows around them. Outside, the children are being picked up by their parents and there’s a young girl Molly (Molly McCann). She’s looking at the dead birds. Seeing them is upsetting and Gemma tries to give a bit of a lesson about how nature can be cruel at times. It is here that I learned it was the cuckoo bird that does this and the girl is sent on when her mother calls. There’s then a kind of funny scene where Tom (Jesse Eisenberg) messes with her. They’re dating and in the market for a new house.

The couple goes to an office for a development called Yonder. They meet Martin (Jonathan Aris) who wants to take them to a unit to show them around. Gemma doesn’t really care for the models and Tom really doesn’t want to go. Martin is quite convincing and gets them to check it out.

There’s something off about Martin, but he is nice. Tom keeps making sarcastic comments and Gemma is doing what she can to make it less awkward. Things take a turn though when Martin disappears. The couple tries to leave, but no matter which turns they make, they end back up at Unit 9. They decide to stay the night and the next morning, Tom uses his ladder to climb up to the roof. What he finds is chilling. There’s no end to the development in sight. There’s something not right about the sun or the clouds.

Tom then makes a drastic decision, but no matter what he does, it doesn’t make a difference. That next morning is when they find a box with a baby inside. There’s writing on an inner flap stating if they take care of it, they’ll be able to go. Much like where they’re trapped, there’s something not right about this child and Tom continues to try to find a way out.

This is where I want to leave it, as I don’t really want to spoil the movie. I do think there’s a lot to unravel here. Something interesting about this movie is that we don’t get a definite answer. I did look up an interview to find that the director, Lorcan Finnegan, as well as the writer Garret Shanley. According to them they did this on purpose. They do like the different concepts and theories that have come up. I have incorporated some from them what I think into my interpretation here as well.

I’m also going to try to do this without spoilers. There will be a section at the end as well as a review on my podcast Journey with a Cinephile: A Horror Movie Podcast where I’ll delve into this as well. The first thing is that the opening scene of this bird nest is quite important. All I’ll say here is that the boy they have to raise is like the cuckoo in that, he drives a wedge between them and takes over their lives. I also feel there’s a bit of sucking the energy from his ‘parents’. The longer they are there, the more haggard they look.

It was interesting to read that this story was inspired by housing developments that popped up in Ireland right before the economic collapse that happened in the late 2000s. This does translate well over to the United States, where I’m from, in the fact that we’ve been seeing these since I believe the 1970’s. Heck, this is part of the concept for the original Poltergeist. These houses are pretty much carbon copy of each other as it cuts down on costs and drives up profit margins.

Going from this, there’s a bit of creature feature in this movie. We first get introduced to it with Tom while he is digging. He hears a creature faintly and thinks that if he keeps digging, he’ll find it. The boy is watching things on television that are in black and white, with an eerily similar noise emanating from it. When he gets older and is portrayed by Eanna Hardwicke. He comes home with a book with similar images from the television. There’s a scene with the boy and Gemma where he mimics this sound and it legit chilled me to the bone. It is one of the scariest parts for sure.

The last thing I want to talk about when it comes to the story here without spoilers is that we can clearly see they’re living in a world that looks like ours, but it isn’t right. The houses are all beige. There’s no real color. All of the food they eat is similar to what we do, but it is bland and flavorless. The art in the house is just paintings of the room it is in or the outside of the house. The sun isn’t right and the clouds look fake. It is just being in a world that is a mimic, but doesn’t have the heart that humanity brings. The boy doesn’t really know how to convey emotions either. He asks and inquires about them, but we can see he doesn’t really understand.

To shift this over to the pacing of the movie, I’ve heard a lot of people saying this should have been 40 minutes like an episode of something like The Twilight Zone. I do get that, where although I did like it, I do feel that it is a bit long. The movie runs 98 minutes, where I legit think that getting this down to 90 and probably even closer to 85 might have tightened it up. I come in with this as the movie doesn’t really give us a definite ending and it does get a bit repetitive. I like the open-ended aspect where I can make my own conclusions, but if that’s the case, I think it should be trimmed then.

What didn’t disappoint was the acting. Poots is really the star here. I’ve been a fan of her for awhile and it is interesting as she doesn’t do a lot. I don’t think I’ve seen her in a bad role aside from Black Christmas from 2019. I don’t necessarily blame her there though. She has the most depth here and really makes you question what you would do. Eisenberg is interesting as he pushes her humanity and she is saddened by the rift that comes between them. I thought his sarcasm adds to his character for sure. Jennings, Aris and Hardwicke were all solid. There’s something off about them all and it really made me feel uncomfortable for sure. I’d say that overall the acting for this movie was good.

Taking this to the effects, we don’t really get a lot to be honest. I love how they made this set feel like we’re in something like The Truman Show. We know there’s something off about it, but here we don’t really know what it means. Most of the effects seemed to be done practical, which is always a good thing for me. If there is some CGI, it was seamless. They do have some really good cinematography and the use of color late in the movie is great to signify different things. The devoid of color for most of it makes sense as well.

The last thing to go over would be the soundtrack. We get a few indie songs that I had never heard of, but I really like their sound. It brings an interesting vibe to the movie and just fit for what they needed. I’d legit consider adding these to my playlists. The rest of it also fit and helped to enhance the scenes they were used.

Now with that said, I really liked the concept of the movie and the story they’re presenting us. We get some interesting social commentary here that I can appreciate. I thought the acting was good across the board with Poots taking the lead. The effects we get, the use and not using of color was strategic. We get a solid little soundtrack. I’d have to say that this is a good movie and one that I would like to check out again. It really made me uneasy feeling and I’d actually recommend this to horror and non-horror fans alike as well.

What I wanted to delve into here is what I think this movie is about. We have Martin who needs to bring a couple to a house in order to raise another child like him. They grow quite fast, make a loud screaming sounds that are annoying and really just mimics his ‘parents’. As I said above, he is driving a wedge between Gemma and Tom. I also think this is an allegory for young couples having children before they’re ready. Tom is kind of an asshole here and rejects the child flat out. Because he sees it as a creature, he is willing to starve it until it dies. I guess you could see this as an abortion of sorts. Gemma isn’t prepared, but she feels a kinship to it as time goes on and can’t just let it die. I feel this is the other side of Tom.

The boy is a monster though. We get an odd scene where Tom throws a cigarette down and the artificial grass disappears. He starts to dig. Because this world isn’t quite right, his body bruises and the food he’s eating aren’t giving him the actual nutrition that he needs. He breaks down and wastes away. The constant digging doesn’t help. He does find something in the hole and I think that it is a former occupant of the house. Like the cuckoo does, the boy is taking the life away from these two people until he’s ready to go into the world. What I did pick up on from a podcaster in passing is that this is also an allegory for capitalism. The body that Tom finds is his own and through work he’s digging his own grave.

Sticking with the boy being a monster, Gemma tries to follow where he goes. She does attack him when she gets fed up and he opens up a rip into another dimension. I like that we get to see, even though the couple feels lost in their place, they probably have people living next door. It just is a different dimension. Since Gemma is human, I think this kills her as it is too much of a strain on her body. I do think there’s a bit of losing yourself in these developments. There is also a bit of you not actually knowing who your neighbors are in a sense.