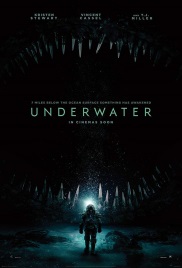 This was a film that when I first heard about it intrigued me. I both love and am terrified of what could be at the bottom of the ocean. Seeing that this had what looked to be monsters as well ticked another box and I had vibes this could actually fall into Lovecraftian elements as well. The synopsis is a crew of aquatic researchers work to get to safety after an earthquake devastates their subterranean laboratory. But the crew has more than the ocean seabed to fear.

We start this with newspapers filling us in with the back-story. The Tian Corporation has decided to drill at the bottom of the ocean to create energy. There are reports of seeing something that might be quite big and the reports are shot down by the company.

It then takes us to Norah (Kristen Stewart). She’s brushing her teeth and we get the feel of the place she’s in. The lights don’t seem to be reliable as they’re close to 7 miles under the ocean, the deepest an operation like this has ever been. The place is then rocked by an earthquake. Norah makes it to a room where she is joined by Rodrigo (Mamoudou Athie), another worker that she knows of, but has never met. She is trying to shut a door to prevent the facility was destroying itself and has to kill two other co-workers as they won’t make it in time. The two are knocked out though by place shifting.

When they come to, they leave the room and look for a way out. This brings them to Paul (T.J. Miller), Captain (Vincent Cassel), Smith (John Gallagher Jr.) and Emily (Jessica Henwick). The plan Captain comes up with is to go to the ocean floor, walks across to where the drill is housed. This is something that’s never been done before. They also encounter something that the world has never seen before either.

Now I wanted to go a bit lighter on the recap here as there’s not a lot to the story if I’m going to be perfectly honest. The goal is to survive, they don’t have a lot of time and there could be something down there with them. This idea is what is really driving the tension as well. I do have to admit that I did get bored with this for a good stretch. It is odd as the runtime is normal and doesn’t really outstay its welcome. I just think they focus on the wrong things.

What I did like though was introducing the back-story as well as the epilogue through the newspaper headlines. This has been done before, but I think when you can use it, it is an interesting way to introduce information quickly without just flat out having characters tell us things. It hints as to what we can expect to happen here as well.

Going along with that, I like the characters we get because of the job that they’re doing down there. Norah is able to pretty easily fix computers, but she points out that she’s a mechanical engineer so I buy that. Not everyone can do what she can, which makes that work even more. Everyone that is down there would be smart or really good at something as they wouldn’t just send anyone down that far. When they know things about the science behind it, I don’t really question it.

As I was saying earlier, I did get bored a bit here. It doesn’t waste any time getting into the crux of what destroys the facility they’re in. I almost think that might work against the movie as I think part of my problem is that I really didn’t care about anyone as they don’t really get established. I’ll delve more into this with the acting, but that’s what I thought when I was walking home after leaving the theater. The tension never really builds from there either as well. I mean I did think about how they need to hurry before it is too late and then when see the creatures that add to it as well. It just feels too safe for whatever reason. We also get the set up for a sequel if they so decide. Seeing the box office briefly, that might not be the case.

I know a lot of people probably won’t see this or are ready to bash Stewart for her performance and I’ll admit she isn’t great. I do think she is fine though, especially since it can be explained by how smart she is. She did have a husband, but that doesn’t mean she can’t be cold like she is here. We do get to see her in bra for a good portion as well as her underwear if that interests you. Same goes for Henwick, who I did think was fine in her performance overall. She does show fear which is good. Miller tries to be funny, but it really didn’t work that well here. Cassel shows signs he could be losing it, but it never goes anywhere. Gallagher I thought was really underutilized and the same could be said for Athie. I think the biggest problem here would be that we don’t establish ‘normal’ for the characters. I think with that, we get more of an emotional impact to see them as they’re trying to survive in my opinion.

The effects were something that I was curious about as well. This does go pretty CGI heavy, but to be honest, I was fine with it. I believed that these people were inside of the facility that is at the bottom of the ocean and as it is falling apart. They’re doing what they can to survive. The underwater scenes looked good as do some of the deaths we see. The creatures that I’ve alluded to are pretty much done in CGI, but again, I thought they looked real enough. I didn’t really have any issues there. I’ll have a brief spoiler section at the end that I want to delve into a couple things here as well. The cinematography was pretty solid as well.

Now with that said, I thought that this movie did some good things, but just fell a bit flat for me. There are some believable parts to the story and it is a setting that makes me feel uncomfortable, with something I believe to be true about the bottom of the ocean. The movie though was boring until we get the climax and I think part of that is the lack of fleshing these characters out, especially with the ability of these actors. They went heavy with the CGI, but I didn’t have issues with it. The murkiness of the water does help a lot there. The soundtrack didn’t stand out aside from the use of alarms. They did make some scenes quite tense if I’m honest. Overall though I’d say this is slightly above average. I enjoyed the movie, but probably one I won’t revisit unless I have to.

What I wanted to talk about was first about the situation there in. The synopsis I’m assuming is to avoid spoilers, but the earthquake was actually this giant creature freeing itself. It is attracted to the light and is destroying this base of operations. What I really wanted to delve into though was my statement about this being Lovecraftian, because I originally thought that it was a Cthulu. After hearing Mr. Venom from the Fresh Cuts podcast, I actually think it is another elder god in Dagon. It has tentacles on its face and is a giant sea creature. I did like that it moves like a cave though having holes were they are smaller monsters living in that and then we see the tinier ones are similar to what comes out of people’s chest in Alien. This movie pays a lot of homage to Alien and Aliens, but I don’t find that to be an issue. That’s what I wanted to point out here and would curious what others thought about this.