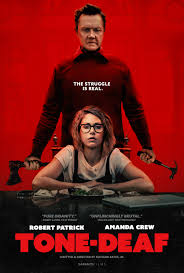 This was another film from 2019 that I checked out when trying to cram in more films released this year. I heard an interview for it on Shockwaves podcast with the writer/director Richard Bates Jr. The premise of it sounded intriguing so I gave it a viewing. The synopsis is a woman goes to the countryside to spend a quiet weekend after losing her job and having her last complicated relationship implode. She rents a country house from an old-fashioned widower who struggles to hide his psychopathic tendencies.

We start with a girl during her piano recital. She keeps looking out into the crowd, but doesn’t seem to find who she’s looking for. It then shifts to a couple of Crystal (Kim Delaney) and Michael (Ray Wise). It appears that she’s taking forever to get ready and Michael is trying to get her to finish up. This takes a dark turn though when he kills himself.

It then shifts to the present as we follow Olive (Amanda Crew). She goes home to her boyfriend, York (Nelson Franklin). He got another parking ticket and he’s making breakfast. Olive tells him she’s going to pass and he freaks out a bit. They then go through a pretty easy break-up and he leaves. She then goes to work where she gets fired by Asher (Ray Santiago), the sleazy manager. To make her feel better, Lenore (Hayley Marie Norman) and Blaire (AnnaLynne McCord), come over for a girls’ night. They recommend that this could be a good thing and tell her that she should go on a vacation to clear her head. They then ask her to play piano for them and lie to her that she’s really good at it. This is clearly something that Olive likes doing, but she’s not very good and no one has the heart to tell her.

Olive reaches out to her mother, Crystal, who lives on at a religious commune. She also tells Olive that taking a trip would be good. She also has a moment where she thinks she sees her deceased father and decides to go forward with this. She reaches out on a website to rent a house in the country for the weekend.

The man that she contacts is sitting in a creepy room on his computer. He Google searches for Olive. We then get a weird scene where we really get to meet him. He is Harvey (Robert Patrick). There’s a moment where he is talking to the grave of his wife where he wants her to be back instead of their son and then addresses the camera, seemingly to talk to us.

He meets with Olive as she checks in and tells her the rules for the place. She gets a scare when she goes inside to find a family friend of Harvey’s, Agnes (Nancy Linehan Charles). This isn’t the last time that someone comes into the house without being invited. Harvey has a dark plan for Olive, but it doesn’t along according to that. His son is worried that Harvey is suffering from dementia. He disagrees and he has something he was never able to accomplish that he’s finally getting around to do.

Now as I was watching this, we get some breaking of the 4th wall for sure. When I first noticed it and I remembered the interview that this movie did some things that you don’t really see to take a chance. I’ve also could tell from the rating on the Internet Movie Database that many people didn’t like it. To be honest, I do think this movie has some flaws, but it also is a pretty interesting social commentary.

Just recently I’ve been pretty harsh in my assessment of a movie that is a bit too heavy handed. I would be bias if I didn’t point it out here. This film is pretty ham-fisted in what they’re trying to convey. Olive and her friends are definitely over the top take on millennial. Where I’m a bit more forgiving though is this is a comedy where they’re poking fun at it. That does make it work a bit better. Then on the flipside you have Harvey, who is baby boomer. He’s getting angry to the extreme about the things that are again stereotypical. It is an interesting clash of culture from the two eras.

What doesn’t end up working for me is that there’s this news report we see in a bar about women being kidnapped. Olive is there on a date with James (Tate Ellington) who she met from a social app. The truth of what is going on there is something that is social relevant, but it really doesn’t fit outside of how Harvey gets involved. There are some other things that Harvey does as well that just seem petty and not really necessarily in his character. This is a comedy, but some of these things aren’t funny. Part of this is also to increase the body count, but I don’t think that’s needed. Sticking with this dark back-story of Harvey and what they set up I think would work better as this just feels like it is trying to take too much on.

That will move me to the pacing, which I do think is still good. I never got bored, which is what I’m looking for. I was interested to see where this was going to go next. I do think that some of the aspects of the story are done with a long play, so if you forget about something, it might not impact you the same way. I just don’t know if this builds as much tension as it probably could have. I will say that I really liked the climax and how all of that played out for sure. It fits with what they’re building toward the entire time.

As for the acting, despite the over the top nature, I liked it for the most part. Crew is an actress I thought had a pretty promising start. I remember in college seeing her a few things and I really dug her. She has disappeared and I thought she was good here. She does come off as what I hate about those of my generation so that was kind of funny for me. On the other side is Patrick. He’s such a legend to me as growing up, I’ve seen so many of his movies. He is just so talented and I think he fits the role well, especially as the counterpoint to Olive as everything I hate about that generation. I would say the rest of the cast is fine in their performances, they really perpetuate the culture of both sides.

This movie really surprised me with the effects used. They aren’t all great, don’t get me wrong there. They looked to have gone mostly practical and the blood that comes with it looked to me as did the gore that went along with it. There was a scene late where they went CGI though and I wasn’t a fan. We also get a spider that makes a couple appearances, that was CGI. It was small enough that I wasn’t too bothered. I could just tell. The breaking of the 4th wall is kind of weird and I don’t really know if that was needed. Not being able to see when Olivia loses her contacts and glasses was shot interesting as was the rest of the film.

The last thing would be the soundtrack. For the most part it didn’t really stand out to me, but I did notice they really took care into it. Being that it is called tone-deaf, we do get that Olivia is not good at playing the piano. Some of the song selections I wasn’t the biggest fan of, especially a parody of song I don’t really care for the original. It is a joke song though. It just isn’t one that really worked for me overall.

Now with that said, this film did have some really good things going for it. I actually like the idea of dementia setting into this hard working man and him losing his grip with reality. The problems really do come from this being a comedy that is trying to have social commentary. I guess that technically makes it a satire, but I think this could’ve worked better to ground it more into reality. There are just some mixed aspects with the tension. The acting is good though for what they needed. The practical effects are great while I didn’t really care for the CGI. Soundtrack didn’t really work for me either if I’m going to be honest, aside from the piano aspects. Overall I’d say this is just slightly above average. I like the message it wants to convey, just not how it plays out.