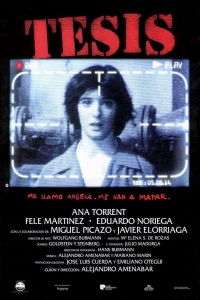 Now this was a film that I had never actually heard about. It was part of The Podcast Under the Stairs Summer Challenge Series for the 1990s. I actually came in blind, since that is my favorite way of checking out movies. I really had no idea what this about, aside from that it was foreign. A second viewing has been made as well, thanks to the same podcast and Duncan selecting this as part of the monthly movie club as we’re watching Spanish language films. The synopsis is while doing a thesis about violence; Ángela (Ana Torrent) finds a snuff video where a girl is tortured until death. Soon she discovers that the girl was a former student at her university.

We start this off with a subway train that is getting an announcement that they have had to stop short of the station. Someone decided to kill themselves by jumping in front of it. Our main character, Ángela gets off the train and tries to see the body, but she is escorted away among other people.

Both students are in the lunch room and he comes up to her, inviting her back to his place. It is there he shows her a film called ‘Fresh Blood’. She can’t really stomach what she is watching and she doesn’t actually enjoy what she is seeing. He loves it though, even though the movie he is watching is supposedly like Faces of Death with having real murders on tape.

We shift over to Figueroa as he goes into a storeroom where they keep a bunch of tapes owned by the university. There’s another faculty member in there and he is hiding from this other person. When he hears them leave, he goes to a secret room. The person working calls out to him, because they’re closing. He snags the first tape and goes to a screening room to check it out. The next day, no one has seen him. Ángela ends up finding him dead in that screening room. She does report, but instead takes the tape home with her that he was watching at the time of his death.

She can’t watch it though. She does record the audio and listens to that at first. It’s not until she takes to Chema that he actually sees what is on it. While watching he realizes that he knows the woman on the tape and it looks to be real. The woman is murdered and mutilated while it was recorded. Ángela only catches glimpses and it really is when Chema starts to notices different things about the film that they go down a path of investigation. He points out how the film is shot and edited that lead them to Bosco Herranz (Eduardo Noriega). Is he really involved in this? There is actually a much bigger plot here and everyone seems to have a secret. Castro (Xabier Elorriaga) also takes over teaching the class and he’s much harder on Ángela about what she is research/investigating. This leads her down a path of danger and discovery which goes beyond her thesis.

What I want to lead off my analysis of the film with is that I’m definitely glad I came into this film blind. I tried my best in my recap of the film as to not spoil anything, because it definitely relies on its mystery. This is very giallo like and much like my favorites in that sub-genre, I had no idea who the killer was. There are a few red herrings and things that just completely threw me off and I’m glad they were there. It kept me engaged with the mystery for sure. It even helped with this second viewing. Even though I knew who the killer was, I was still intrigued trying to pick out things I may have missed the first time around.

This film also does delve into some interesting concepts as well. The big one I wanted to tackle first is the interests of our characters. Ángela is doing her thesis on the audiovisual violence. I find this quite interesting, as this is before we really went to a 24 hour news cycle. It is the time though where death, war and scandal really sell. This film has an interesting commentary there for sure. She doesn’t like violence, but she knows that it sells and she is trying to point out the problems there. Her growth is interesting here as well. At first, she cannot watch it. She is intrigued by it though as we see with the accident on the subway in the beginning and when she first gets the tape. By the end though, she is desensitized. I think this growth is natural without playing its hand too early. I’ll be honest, it feels like me with some of the films I’ve seen.

Another is Chema. He is a big horror film fan. He has posters all over his place like Alien 3, Shocker and even a Xenomorph painted on his wall. He wears horror t-shirts and an issue he is contending with is that he feels no one likes him. There is a bit of a low self-esteem there as well as self-loathing, but I also think that he’s been rejected so to protect himself he lashes out to those around him in defense. It is kind of a classic sign of someone dealing with bullying actually.

Another aspect of the film I wanted to go over is something that Castro says during a lecture. He is talking about the movie industry in the United States and how it dominates so many foreign markets. Being that this film is from Spain, he is talking about how they don’t really have a connection between filmmakers and the audience. The audience influences the filmmakers in order to create the industry. This group of students he is lecturing is the future to try to build this and I thought it was a cool perspective to show here. This is intriguing seeing this almost 20 years after, because there really wasn’t a lot of change unfortunately, aside from cinema is made elsewhere just not at the clip as the US.

If I have a gripe about this film, it would have to be the length. I don’t mind a film being long, if it really needs to be. I think this film does have just a little bit too much filler and it kind of hurts the pacing just a bit. It runs just over two hours long and I think there is probably 15 minutes that could be trimmed to tighten it up. With that said though, I was engaged here with trying to figure out what was going on, but it’s not confusing. The mystery though is coming from trying to figure out what is real and what’s not. I like that the perspective of Ángela shifts with all the evidence she encounters. I thought the ending was good and how everything plays out. It also becomes an interesting commentary about the film industry there with this snuff film situation. To be honest, in countries like this or South America I could see snuff films being produced.

I’ll move next to the acting of the film, which I have to say I thought, was good. Torrent is solid in her role. I like that she is concerned with what she sees on television and wants to explore this with her thesis, which leads her into this mystery. It is a shame that we glorify on the news a lot of bad things and I like this is still relevant to our situation 20+ years later. Martínez is interesting and does well in his performance. He is me in my friends group, just more extreme. I like some of things around his place and can respect his interests. He is intriguing in what he is hiding as well. Noriega I thought was solid as well as the opposite of Chema. He comes off smug and a tad bit creepy which makes his performance work. Elorriaga and Picazo are both solid and the rest of the cast really rounds out the film for what is needed.

Something I found to be pretty solid as well would be the effects of the film. I’ll be honest is that they don’t really show a lot. Quite a bit of it is just flashes, which I don’t mind. I think part of it is to hide it so if they don’t look good, they can’t be over analyzed. There is also the aspect that Ángela is freaked out by it and this film is from her perspective. I would also say that the film is shot very well also.

Now with that said, I was definitely glad this film was on the list. The mystery in this film was good and the use of red herrings kept me guessing until the end. If you can do that, you usually have me on board. There is a bit of a pacing issue in the film, but I was still on board and the film did build the tension needed. The acting was good and does really help bring this film to life. There’s not a lot in the way of effects and they do well at hiding them, which normally works for me. The soundtrack of the film really didn’t stand out to me; they do have some good use of screams, especially when Ángela is refusing to see what’s on the screen. I should warn you; this film is from Spain so I watched its native language with English subtitles. If that’s an issue, I’d avoid this. If not, I really thought this was really good film.