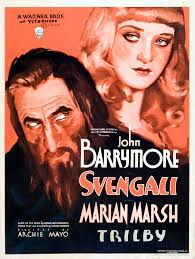 This was a movie that I'll be honest is I'm not sure when I first heard about it. It was one that I didn't see until now, I do know that. The name sounds familiar, but that could be getting it mixed up with Svengoolie, which I'm assuming was a play on this title. Regardless though, I didn't know much about this movie aside from reading a brief synopsis and seeing this from 1931 thanks to Letterboxd when I was looking for movies for my Odyssey through the Ones. The synopsis here is through hypnotism and telepathic mind control, a sinister music maestro controls the singing voice, but not the heart of the woman he loves.

We start this movie with a sign where we learn that Svengali (John Barrymore) is a famous pianist. Madame Honori (Carmel Myers) shows up where she is stopped by his assistant Gecko (Luis Alberni). Svengali is listening from around the corner of a room as Gecko informs her that his maestro is composing and cannot be bothered. Svengali does come out to speak with her. She is there for her music lessons as she is a singer. Madame Honori does reveal that she left her husband for Svengali. He is intrigued by this, but clearly bothered that she did not take a settlement. Svengali has her leave. Things get dark here is that we learn she killed herself soon after.

Svengali then goes to visit his friends who are from Scotland from what I gather. There is Monsieur Taffy (Lumsden Hare) and The Laird (Donald Crisp) who live together. When they learn that Svengali arrives, they try to hide their money as it is hard not to give it to him as he plays the piano so well. This duo is also quite comical. They decide to mess with Svengali by forcing him into the bathtub as he rarely bathes.

While he is in the tub, the two leave and go over to their friend down the hall of Billie (Bramwell Fletcher). He's a painter from what we learn. They went to gather him to go get a bunch of kids to show them Svengali in the bathtub as a prank, including taking his clothes. What they don't bank on is Svengali drying off and taking of the Scots' finest suites.

Things all change as well when Trilby O'Farrell (Marian Marsh) comes to the apartment as well. She is a model for an artist upstairs and they sent her down to this apartment. Svengali falls in love with her immediately. He notices how her mouth is set up. She could have a great singing voice. To complicate matters though, Svengali isn't the only one who falls for her. Billie does as well and she feels the same for him.

Svengali comes to visit and sees the young lovers. Trilby is experiencing a headache and he offers to alleviate her pain. What she doesn't realize is that he hypnotizes her, making her forget everyone aside from him. He then hatches a plan to make her star while he plays the piano, solving his money troubles. The problem really becomes though, he can control her with his mind, but cannot make her love him. This ability also takes it toll on his body.

That is where I want to leave my recap for this movie. If you've read any of my other reviews for movies from this era, they do tend to be lacking a bit in the story department. I just really want to preface here as my recap of the movie goes to around the halfway point. The story isn't really the more important here, but much more of a character study of this character Svengali.

Now that is where I want to start in my breakdown. Svengali is a refugee from Poland. This is an interesting country to have this character from as it has been volatile and really been in a state of flux. It tended to get conquered quite a bit from places like Germany, Mongolia, becoming a commonwealth with Lithuanian and of course, their issues with Russia. I love the influence of this on Svengali. He's a scavenger and also a bit of a scoundrel in how he treats Madame Honori and Trilby. What is shocking is he's a talented pianist, so he has a way to make money. I'm wondering if his displaced lineage is part of the reason here.

There is then this other part of Svengali in that he's trained in the ability to hypnotize people. We don't get much of it with Madame Honori and I'm really glad that the movie doesn't give us that yet. It isn't until he does it to Trilby that we realize what he's capable of. Svengali is feeding lines to Madame Honori, who is paying him for lessons. When she messes this up by leaving her husband without a settlement, she has outlasted her usefulness. I do like the lines he gives to Trilby to help alleviate her headache.

Since I was talking about his abilities, I want to go to the effects. We don't get a lot of them, but this is again early cinema. What I have to give credit to here is what they do with Svengali's eyes. I do have some trivia to share that this is one of the first movie to use contacts. They are quite creepy to be honest as they were hard plastic, which probably didn't feel good. Going from here, the cinematography is interesting here. There is this great sequence where the camera pans to see Svengali with his contacts and then pulls back. It is impressive regardless of time period, but even more for this movie being from 1931.

I think that the acting should be where I go next. Since this is a character study of Svengali, a good performance is needed. Barrymore does a great job as this character. I know I've seen him in a silent film, so I'm glad to see him in one where he is a talking picture. The look of him is creepy and how he plays the role is spot on. Marsh is cute and I really enjoyed her character as well. It is interesting how things play out with her and the effect she has on Svengali. Fletcher is solid as this young love interest that really becomes a thorn in the side of Svengali. Crisp and Hare also bring some comedy which works well. I'd say that overall the acting is solid across the board.

Then the last thing I want to go over would be the soundtrack. I'll be honest; it didn't really stand out to me for the most part. I do think that Madame Honori in the short scene that she sings and Trilby in her performance was good. The piano music that Svengali also works and really fits what was needed. I'd also question if Barrymore is really playing. If he did, I give the movie even more credit.

In conclusion here, I think that this is an interesting movie. It feels similar to Phantom of the Opera, but with this creepy looking Svengali using a different method to convince the young and beautiful Trilby to join him. I think Barrymore's performance is great with Marsh and Fletcher bringing an interesting dynamic alongside. The effects used on Svengali's eyes for his ability was solid and there is some interesting cinematography for early cinema. The soundtrack also worked for what was needed in my opinion. If I do have any issues, the movie is lacking a bit for the story, but again this is an early film in the grand scheme of history. I would say this is an above average movie in my opinion. This would be one that I would actually consider seeing again.