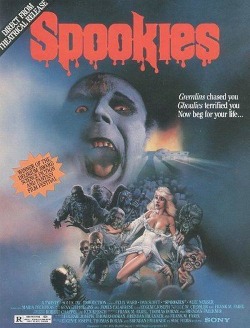 This is a movie that I’ll be honest, I never heard of until horror movie podcasts. What is interesting here is that most everyone who talks about this one says how bad it is. It appears that Vinegar Syndrome did a restoration for it and then fans came out the woodwork. This is another one that the randomizer selected so I could finally tick it off the list. The synopsis is a wicked sorcerer tries to sacrifice a group of people inside his house with the intention of using their vitality to keep his wife alive.

We start here in a graveyard. There is a grave that is chained shut and it is pulsating. We then shift over to meet who I am assuming is Kreon (Felix Ward). I don’t recall his name every being stated, but he is talking to a coffin. Inside we learn is his wife of Isabelle (Maria Pechukas). He is setting up a ritual to bring her back to life.

The movie then introduces us to our other characters. There is Billy (Alec Nesmer) who is running away from home when his parents forget his 13th birthday. He meets a drifter, Pat Wesley Bryan, and Kreon’s servant, Dan Scott. I believe at some point he is called Kitty, but he is a creature of sorts who is following Billy.

There are also two cars of people that are driving this road through the woods. One is driven by Duke (Nick Gionta) who is with his girlfriend of Linda (Joan Ellen Delaney) and their friend Rich (Peter Iasillo Jr.). He is odd with a puppet that he messes with. The other car is driven by Peter (Peter Dain). He is with his girlfriend of Meegan (Kim Merrill). With them are also Carol (Lisa Friede), Adrienne (Charlotte Alexandra), Dave (Anthony Valbiro) and Lewis (Al Magliochetti) They were at a party, but they were kicked out as Duke is a hothead. They are now looking for somewhere else to go.

Billy along with these two groups end up at his abandoned house by a cemetery. It is rundown, but Duke thinks it is perfect for what they’re looking for. What they don’t realize is that Kreon is summoning them here as victims for his ritual. They discover a spirit board that possesses Carol. It becomes a fight for a survival as they meet different monsters and creatures as they try to make it through the night.

That is where I’m going to leave my recap as that gets you most of the set up. Up until this point, I was with the movie to be honest. I was getting Evil Dead vibes, but that wasn’t a problem as movies are constantly using ones before it while doing their own thing. The problem that I did have here was that it went off the rails from this point and I became lost.

Before I start to breakdown different parts, I’m not shocked to see that this was originally a movie called Twisted Souls. It appears that a producer had the rights, stepped in, had more footage shot and then spliced it in to create this movie. There are things happening that feel disjointed. The stories we are getting is missing pieces and then the ending is abrupt. I’m also curious now to read about or see what the original idea for the movie was to see if it would have been better than what we got here.

Circling back though, I’ll go back to what we get first. I was interested to see what Kreon’s plan was and where they were going to take it. His love Isabelle is dead. He needs souls to bring her back to life. He has a servant helping him and they also have a son of Korda (A.J. Lowenthal). They possess Carol once those groups arrive to help kill off the others that are there. There’s a wrinkle that Isabelle may have killed herself as she didn’t love Kreon. He wants to bring her back, regardless of she wants. I think we have something there that if they fleshed it out a bit more, it could be interesting. To add to this, Kreon is looking at what he is doing as a game of chess. He is directing his victims to different rooms. This is something else that I’m on board with.

The problem then becomes we have scenes that are together, but don’t fit. Billy is given a bit of back-story, but his line goes nowhere. He meets a drifter, but then he is killed. Kreon’s servant is stalking Billy, but why? We never get any more there. Then we have this group of people that arrive at the house. They make horrible decisions, which I can work with. Peter and those with him start to investigate solving what is going on here with this ritual, but then we never come back to it. They never find an answer. We also don’t get an ending to them either. There are things here that are introduced, they are just never resolved and that is an issue. What I am willing to say here though, I do enjoy Italian cinema. This feels like it is paying homage there and using nightmare logic. My problem is that there are too many holes to explain here.

I will move away from there and go to the best part of the movie which are the effects. We get some cool looking creatures here. I don’t mind the makeup of the servant or Korda. There are some Ghoulie looking creatures as well. We also have a Spider Woman (Soo Paek) and a Grim Reaper (James M. Glenn). There are also quite a few zombies. I had some slight issues with practical effects that looked fake. Nothing to ruin the movie though. We also get some early computer effects that were fine as well.

Now to move on to the acting. I think for the most part it is fine. Ward works as this menacing sorcerer who is our main villain. Pechukas is solid enough as his love interest that doesn’t feel it back. Scott works as the servant. Nemser is okay as Billy and the drifter that spooks him is about the same. Lowenthal was fine as Korda. I don’t think the acting was bad as the group of friends that show up. No one is great, but many of them play caricatures. I do think that the writing probably didn’t help there either. I will give credit to Paek, Glenn and all those that played monsters or zombies. They worked there for what was needed.

Then the last things I want to cover were the cinematography and the soundtrack. For the former, I think it was fine. The camera work didn’t blow me away though. As for the soundtrack though, we get some good atmospheric music. The opening song worked for me. There were some sound effects that didn’t fit. We also get some music that didn’t work for what they were doing either. This doesn’t ruin the movie, but a couple times it took me out of what they were doing.

In conclusion here, this movie has some good elements and some that are not so much. I think that we have a good set up. If they would have stuck with that story, this movie could have potential to be more than what it is. The changes they made hurt the product and it is disjointed. I will give credit to the effects. Only slight issues there. The same for the soundtrack and design of the movie. The acting is decent overall. I can forgive some with nightmare logic, but we are just getting too many issues to explain it all away. For me, this is an average movie. It is equal on both sides for the good and the bad for me.